Drusilla Delaney, daughter of an English Victorian vicar has grown up near and with the aristocratic Framling children – handsome Fabian and spoilt Lavinia. While she isn’t in contact with Fabian as much until they are adults, she has been tutored along side and then sent off to boarding school with nearly out-of-control Lavinia, since Lavinia’s mother, Lady Framling, feels Drusilla is a good influence on her headstrong daughter. But even Drusilla’s level headedness can’t keep Lavinia from getting into trouble and only quick thinking and a raft of lies keep the knowledge of Lavinia’s unwed pregnancy from her mother. With the baby girl safely in the hands of Drusilla’s old nurse Polly and Polly’s sister, the two young women return home. Sent off for her London Season, Lavinia’s beauty snags the very man with whom Drusilla once thought to make a comfortable match.

The Framlings have always served in the East India Company and it is to India that Fabian and eventually Lavinia and her husband go. A few years later, Lady Framling enlists Drusilla to accompany an English governess whom she has recently hired for her grandchildren still in India. Mustn’t have the English children brought up by the native ayah, you see. The two women arrive to discover a fascinating land of different cultures and sensibilities which is also at a flash point. Discontent is rift and only needs a spark to set the whole land ablaze. When the firestorm erupts, will the Europeans an be able to survive the rage about to engulf them? And if they do, is there a future for Drusilla which she could hardly dare dream to come true?

I doubt many long time romance readers have not at least heard of the name Victoria Holt and her many famous “gothic” style books. When I saw that this book was being re released, it dawned on me that while I’ve read scads of her novels under her pen names of Jean Plaidy and Philippa Carr, I had never read a Holt book. Determined to remedy that, I jumped at the opportunity to try this famous one. While I enjoyed it overall, there are some things about it that might frustrate modern romance readers at the same time as they delight gothic lovers. 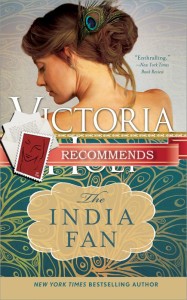 The writing is good, the characters well drawn, and the atmosphere is edgy and sinister when called for. There are mysteries, strange characters, gloomy wings of the Framling great house, a cursed fan made of peacock feathers, batty relatives, plus menacing villains and situations before the romantic wrap up. It also covers a long amount of time, from the young girlhood to adulthood of Drusilla, shows very little sign of any romance until rather late in the book and has a tendency to overdo the mustachio twirling evil of the villain and snobbery of the Framling women. And it’s told in first person which I know lots of people don’t care for.

I love that Drusilla might be the typical innocent heroine but is never subservient to the Framlings even as a child which is the opposite of the archetype “gothic” style heroine. She tells it like it is and takes no guff from any of them. But then Fabian is the same way which serves as one of the signs that “he’s The One” since there isn’t much courtship going on here. During the unease before the Sepoy Mutiny, he relies on Drusilla’s common sense and tells her not to be an idiot about things – which is a refreshing change from a silent, overbearing type hero. Then repeats this sentiment after he gets home and has to remind Drusilla of the feelings they felt then and that he still feels them and is pretty damn sure she does too. It’s kind of an “Snap out of it! We still love each other!” moment.

Is it typical gothic? There are hints and foreshadowing which sometimes take a while to play out or be told such as the home where Lavinia waits out her unwanted pregnancy. This part kind of fizzled out for me. Broad hints were made about the evil feel of that home but then nothing happened while they were there. The blackmail section was a damp squib too as was the Suez crossing bit. Honestly I wasn’t sure where that was going for a while and discovering only later the danger Drusilla had been in was a let down. There is a batty old broad tucked away who gets loose every now and then though the whole ‘evil fan’ didn’t quite gel for me until the end when its horrifying cousin did a number in India. Now that bit did surprise me just a tad but it made the Sepoy Mutiny come alive as hiding out for weeks on end simply didn’t do. In defense of this part of the plot, it would be hard to maintain much semblance of tension over the length of time that Drusilla hides with so little happening to the characters in question. I did like that Drusilla is a self-saving type of heroine with little need for Fabian to “ride to her rescue.”

One thing that was fascinating to me is how the Framlings are like a drug to Drusilla – at one point she even says she “comes alive” when around them. And she does gain a great deal out of the relationship – a better education and chance to travel even if she does have to clean up Lavinia’s messes so many times. Poor Lavinia – her chickens do come home to roost. As I said, I’m slightly surprised at what a gruesome end Holt brings her to but on the other hand, it’s not as if she didn’t have warning and a chance to escape. Lavinia could only evade her mistakes but so many times. I think Drusilla’s shock is well portrayed.

It’s interesting to see the various British reactions to what is going on and to what eventually occurs in India. They’re all still “Yeah for England!” but some at least have an inkling that things might go wrong and aren’t shocked when it does. Some even understand the reasons why and realize the need for a change in government. Is this due to book being written in late 1980s? I wonder how it might have been different had the book come out earlier. I liked the comparison/contrast of pretty Lavina hiding the depths of her real personality vs colorful India seething with revolt.

The romance payoff is long in coming. There are hints but you kind of have to be aware of the ultimate pairings to catch them as at first one man seems a good match then there is the possibility of another. Neither is Drusilla’s real true love but the book allows time for this to become abundantly clear and for it to be obvious that she would be settling for either of them though she could have probably had acceptable marriages with either. As the tension mounts in India it becomes plain who her match is going to be. I found it funny that he’s so at ease with her, and respects her enough, that he can be brutally honest with her, especially about the Suez near miss. Still I miss having his point of view or even having him “onstage” for vast amounts of the book.

Just as with Drusilla, I love that neither Polly nor Eff bows down to the Framlings thus avoiding the “stupid servant” stereotype. Polly and Eff are delightful and so much of their personalities are laid out with the phrases Holt puts in their mouths. Drusilla’s father is the “absent minded vicar” type and I do wish more had been done with his character but it is this very vagueness that serves as the springboard for Drusilla’s association with the Framlings.

Since it’s a first person narrative, if Drusilla doesn’t work for you, I think the whole book will fail. Luckily I like her. She’s honest about herself though slightly off about others as Fabian almost gleefully tells her. And she has had some experience in life from her travels and escapades with Lavinia. Still she’s a touch naive before reaching India and too willing to almost give up on love when she gets back. But since the book is more her life story and a modern telling of a gothic rather than a typical romance, it’s still an enjoyable book to me. B