She was an angel at the gates of Hell.

When Kenan, an incubus, finds a caged angel for sale in the Hellsgate marketplace, he sees her as a challenge. Certain that his skills in seduction will work as well on a heavenly creature as they do on mortal women, he buys Jahel, intent on having her soul as a novelty in his collection.

Knowing he must gain Jahel’s trust if she is to come to his bed willingly, Kenan treats her more as his guest than as his slave. When she reveals what brought her to the mouth of Hell in the first place–retrieving the soul of a young girl she was guarding–he even offers to help her complete her mission.

Though he has promised Jahel freedom, Kenan soon realizes she has captured his heart instead. And as their passion for one another grows, they find themselves caught in a struggle between Heaven and Hell, one that will lead them to the very edge of the apocalypse…

After my fantastic experience reading “Back Across the Styx,” I went on a Karalynn Lee book buying binge. It didn’t matter that I usually avoid angel/demon books like the plague, if it had your name on it, I bought it at Carina. Then I sat eyeing my new bright, shiny ebooks and, flipping a mental coin, opened this one. Oooh, hawt angel/incubus sex. Now I know you can write some smexy stuff too.

The world building is solid with concrete images, sensible actions, and logical set ups and payoffs. The writing style isn’t quite as elegantly spare as “Styx” yet I enjoyed the time spent wandering through the streets and businesses of Hellsgate. Talking cats and hellhounds are fascinating, quirky characters to meet and as much fun as the image of Jahel feeding Edom, one of the four talking horses of the Apocalypse, the remains of her apple pie. 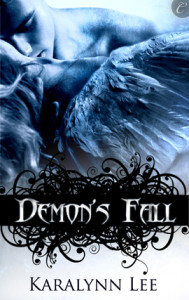 Kenan is an incubus and, as such, not exactly a demon prince so the pairing with an angel didn’t sound “I can’t quite buy this” alarm bells. The fact that he wants to lure Jahel into freely loving him and then giving him her soul, rather than forcing her in any way had me breathe a sigh of relief as forced seductions don’t generally work for me. I needn’t have worried as the angels here are also sexual beings though it’s usually just a physical release and nothing deeper. When Jahel and Kenan get down to business, it’s smoking – and not just because they’re at hell’s gate. Their sex is preceeded by trust which slowly builds a firm foundation beyond the physical and even if Kenan initially uses this as a way to lure Jahel to him, it takes their relationship forward.

I found the concept of an archangel and Lilith working together at first contradictory but then totally plausible. It’s kind of like the Baptists and the bootleggers in the South working to keep counties “dry.” In the story, both the denizens of hell and the inhabitants of Heaven have an interest in maintaining the status quo, so when someone sticks a spoke in the wheels, it’s natural for Jahel, Kenan, Lilith and Balaqiel to end up strategizing and fighting on the same side.

But is there a place for a reformed incubus and an angel who willingly gives him her soul? Yes, there is in this world. With the example already included in the story, the efforts Kenan takes to prove himself worthy and the breathtaking trust exhibited by Jahel, I could totally buy their hand-in-hand walk into their sunny future though I might miss talking with Edom when he’s not saddled for world destruction. B