REVIEW: Reach For the Moon by Val Kovalin

Christmas vacation 1984 is far from festive at the house of eighteen year-old Alejo Sandoval. His parents teeter on the verge of divorce. His final semester of high school looms ahead. He has just found out that his trickster cousin Martin has vanished, leaving no traces behind. And he keeps a secret that could destroy his place within his religious Hispanic world—he and his best friend Bobby Gallegos are lovers.

Independent and exasperating, Bobby is the love of his life. There is no one Alejo would rather have at his side when his mother and aunt send him on a road trip to unravel his cousin’s mysterious disappearance. But what starts as an excuse to get out of Albuquerque and enjoy a romantic road trip soon takes on serious overtones. Martin might have endangered his life by coming out as gay.

Their short fact-finding mission turns into a quest for Martin’s whereabouts through the secretive small towns of New Mexico. Stress and speculation have set Alejo’s eccentric relatives against each other, and Alejo and Bobby are about to walk into the crossfire.

Disclosure first – Val Kovalin and I have both reviewed for” Reviews by Jessewave.” We are not friends, but we had some off-list conversations about other books (not hers).

WARNING – THE BOOK CONTAINS TWO ATTEMPTED RAPES. IF IT IS TRIGGERING FOR YOU STAY AWAY.

As blurb tells you this book features the same characters as your book “Fall Into the Sun”, only on a different timeline. Now because the characters in “Fall Into the Sun” are good two decades older and different things happened to them I would argue that they are not quite the same Alejo and Bobby as in this book. If you asked me why the same guys are placed on the different timeline, I would tell I really have no idea. I wonder why the author did not come up with completely new characters for this book, but I am not an author, so all I can do is speculate. 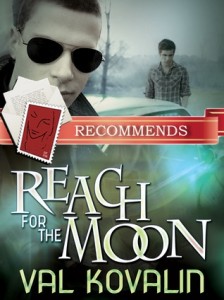 I have to admit that while I think that Kovalin is a very good writer, it took me several tries to proceed past first few chapters of the book. I had to put it down several times. The overall atmosphere of the book was just too suffocating for me and because the imagery that author was portraying with words was so vivid it was even worse.

I was glad I continued reading, though, because this book is so different (in a good way) from many others that I have read. You can see from the blurb that it is first and foremost a coming of age story for Bobby and Alejo, so if you read stories featuring main characters at this age you will know that it also often means them coming to terms with who they are, with their sexual identities, with their place in the world.
This is a familiar subject, but to me the execution was so original that I have no doubt that I will remember this one for a long time.

First of all the settings – both boys are Latino/Hispanic. While I did not grow up within that culture and cannot testify as to the authenticity, I can certainly testify as to the depth of the portrayal. Their cultural identities are a huge part of who they are, their family backgrounds, and how and why they do things, react to things. That does not mean of course that Bobby and Alejo have similar personalities; in fact, they could not be any more different, and I thought it was very well done. Alejo, for example, is a devoted Catholic, and he has no desire to part ways with his religion. At one point in the book he muses that if he is ever able to find a way to assert independence from his parents, he will not do it by abandoning his religion. I thought this was very refreshing, because there are gay people who are Christians (I know I am stating the obvious here). And despite being a devout Catholic, Alejo did not think that he and Bobby were going to hell for being together.

Bobby, by contrast, felt more like an Agnostic to me (although when he was in trouble he still asked for God’s help).

We can see from their actions how these two guys are so different and how their family lives have shaped their personalities. I may have raised an eyebrow about Bobby being able to read people so well at first, but then I thought about it and realized that yes, after growing up with the brothers like he had, he really may have developed the skill of reading them so fast in order to protect himself. Basically he needed to be able to predict what his bullying brothers will do to him next in order to stay safe.
Despite all their differences Alejo and Bobby love each other with such strength, with such overpowering depth that I was swept away. Be mindful, however, that these guys have been best friends since they were little and lovers since they were fourteen – if that makes you uncomfortable, then this book is probably not for you. I cannot say that I always buy “childhood deep friendship turning into love” in the books, but I had to remind myself that I come from a country where (at least when I left the country in the late 1990s to come live in the US) if you weren’t married in your early twenties you were pretty much considered an old maid. Plenty of people I know met their future husbands and wives when they were seventeen (my brother met his wife when they were sixteen-seventeen), so I have to remind myself that Bobby and Alejo figuring out what they want at eighteen does not have to be looked at as extraordinary.

“Joy flooded through Bobby as heavy, rich sunlight. Almost every happy memory he had involved Alejo, but this topped everything that went before. Never had he felt so intensely alive. Their surroundings had a larger-than-life clarity. The gas station, its colors faded from sun and sand-scoured by the wind. The cracked asphalt. The sun tipping below the edge of Socorro Peak. The sky streaked with deep violet shadow. Everything glittered like a holy revelation. Alejo loves me. He wants to spend his life with me. Bobby could not stop smiling and blinking back tears of happiness”.

Bobby and Alejo are worried and scared about how people around them will react to the news that they are together. The culture they grew up with was not depicted as being accepting of two men wanting to be together, and I did not like several of the secondary characters who reflected these negative attitudes. At the same time I want to give the author some kudos for portraying people, not caricatures and for not demonizing anybody in the book. Some people surprise the main characters by accepting the news relatively well, while other people react in predictably homophobic ways, but I was pleased that several people surprised them. And I cheered because it felt like overall the women in the story were more accepting of Boby and Alejo as a couple – at least as much as their upbringing would allow them. Nobody was jumping from joy, but I was still pleased. It was a very welcome difference from many stories I have read, believe me. For me it did not diminish the realism of the story at all (and there were men who took the news as well as they could have), but as I said, I have encountered the opposite so often that I was happy just for the fact that it was different

“She accepts us.” Alejo tried to keep his voice from wobbling. “She quoted the Gospel of Saint John. “This is my commandment, that you love one another, as I have loved you”

While I thought that trying to survive in the overall suffocating surroundings, trying to be honest about who they were and hoping that their loved ones would not abandon them was a plenty of struggle for these young men, I appreciated that Alejo was also trying to come to terms with the realization that he was bisexual. The author showed him thinking about what he would be giving up in terms of societal approval and how much Bobby’s love was worth to him. I thought it was beautifully handled and this quote pretty much summarized how he felt.

“How could he say he was attracted to Eugenia but more attracted to Bobby? That he wanted them both but Bobby owned his heart?”

Despite the heavy subjects the story tackles and despite a somewhat depressing atmosphere for a large part of it, the story did not feel that angsty to me. If you are willing to brave it, I can promise you that the surroundings feel very realistic, and the book offers in depth portrayal of the main characters and quite a few secondary characters as well. Overall this was a memorable reading experience.
Recommended.