1 A Novel Murder (MerryChurch Mysteries #3) by KC Wells This is book three in a series of cozy mysteries with sprinkles of m/m romance. I found it just as lovely and enjoyable as the first two books. There is really no personal conflict between Mike and Jonathon in this book. ... more >

’Tis the season of goodwill to all men…even the one who dumped you. Riley MacDermott’s ambitions are simple. Managing the annual Bath Christmas Market—which involves long hours in the cold and a whole lot of hassle—will secure the promotion he needs to afford to move out of his noisy, top-floor ... more > 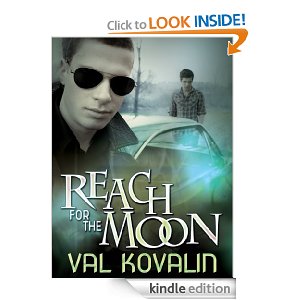 REVIEW: Reach For the Moon by Val Kovalin

Christmas vacation 1984 is far from festive at the house of eighteen year-old Alejo Sandoval. His parents teeter on the verge of divorce. His final semester of high school looms ahead. He has just found out that his trickster cousin Martin has vanished, leaving no traces behind. And he keeps ... more >

REVIEW: The General and the Horse-Lord by Sarah Black

General John Mitchel and his favorite pilot, Gabriel Sanchez, served together as comrades and brothers-in-arms for more than twenty-five years. They followed the warrior’s path: honor first, and service, and the safety of the tribe. Their own needs for love and companionship were secondary to the mission. Retirement from the ... more >