I’ve enjoyed some of your previous books, especially Down For The Count (reviewed here by Jane). I think you can be relied upon to provide an entertaining sexy story with humour and fun. The problem for me with this book was that it was based on the hero deceiving the heroine. It was always going to be a problem and the longer it went on, the more problematic it became.  I suppose how much this kind of deception bothers the individual reader will be an indicator of how well the story works for them. 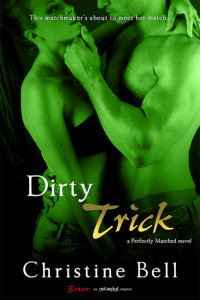 Grace Love, together with her BFF, Serena Elliott, runs Love Will Find a Way, a matchmaking agency located in Salem, Massachusetts.  Grace has a supernatural talent for pairing couples.  She calls it the “tingles” and it has never failed.  Unfortunately, she does not believe the tingles work for her.  Her other best friend is Patrick “Trick” Mathews, a SWAT officer who lives next door.  He is a player and although he makes her tingle all over and has ever since they first met, Grace will not go there.  Grace is severely lacking in confidence after being emotionally abused by her cheating  ex-fiance, Victor.  They were together for two years and in that time, he made her feel like a complete failure in just about every area but most especially in the bedroom.  She has no sexual confidence and in any event, has come to value Trick’s friendship so much she would not want to risk it for a fling.

Trick was instantly attracted to Grace and it didn’t take him long to realise that it was much more than just lust.  He hasn’t been doing the manwhore thing for more than six months but Gracie hasn’t noticed.  He’s desperate for a chance to show Grace how good they could be together – not just as friends.  What saves him from being a total douchebag is that he loves her.  He doesn’t want to just mess with her head and get his rocks off.  He does the wrong thing, but perhaps if not for the right reason, then maybe a right reason.

In Salem, Halloween is a big deal and there is a rich guy who has an amazing Halloween party every year. This guy is someone both Grace and Serena want to cultivate as a client – his imprimatur could take their business to the next level.  Grace’s date has cancelled on her and Trick offers to take his place to help Grace out.  However, Grace doesn’t like the idea because: reasons,  so she decides to go stag.  At the same time, Trick just happens (go with me here) to help out a friend who does special effects makeup and ends up with a Panther half mask (a proper one like they might use in a movie) out of the deal.  He decides to go to the party in disguise and see if he can show Gracie how could they could be together doing the horizontal rhumba.  And this is where the deception comes in. And  the suspension of disbelief.  Because Serena sees through his disguise straight away (she goes along with it because she thinks they’d be great together and she can see Trick loves Grace), but Grace does not.  Sure Trick uses some different soap and cologne and uses a Christian Bale-like Batman voice but how hard could it really be to work it out?

After a very hot encounter which also had some of the most hilarious (bad) dirty talk in the history of ever, Trick misses one opportunity after another to spill the beans and makes excuses to himself for doing so, as well as making excuses to have a further encounter (in a darkened movie theatre) to “seal the deal”.

The boost to her sexual confidence does make Grace realise that it is Trick she really wants and she decides she is up for the challenge and makes her move on him.

I don’t think it would be a spoiler to say that of course Grace finds out that Trick was deceiving her and that she doesn’t react well to it and Trick has to do an epic grovel to get back into her good graces (pardon the pun).  Whether the grovel is sufficient, whether his excuses/reasons are enough, will be a matter for each individual reader.

I was entertained by the writing and the chemistry between Trick and Grace.  I loved the friendship between Serena and Grace as well and I’m looking forward to reading about Serena’s HEA in what will surely be book two in the series.  Serena is quite the character.  Grace describes her friend thus:

Bloodline of a princess, mouth like a trucker. Another thing to love about Serena. Not to mention, if Grace had suggested they break into Seth’s house and replace his shampoo with hair removal cream, her friend would have been pulling the car around in three seconds flat. Forget hide the bodies. Serena was the type of friend who would plant the horse head and do the wet work.

The characters were fun and engaging and there was a moment of true snort-laughter for me with the bad dirty talk:

Maybe he even wanted a little dirty talk.
She swallowed hard and hoped the sound of the steam whistling covered the resulting gulp. Might as well let it rip. “Yeah. I want your c—” It stuck in her throat, and she tried again. “I want your big c—” Again, she couldn’t work it past her lips. He stared at her with a puzzled but patient smile. “I want your cock…a doodly doo…in-inside my p—lady area…business,”she expelled in a rush.
Oh God, no. What was that?

Ultimately though, deception in a hero isn’t a noble trait and that’s where the book fell down for me.  It’s kind of the whole premise though so it’s not like it can be overlooked.  Still, it was a lot of fun.  I give it a B-.