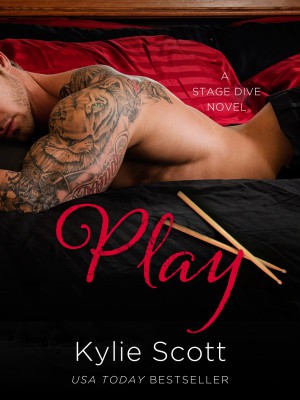 Play is the second book in the Stage Dive series, books that center around a band called Stage Dive. I enjoyed the first book Lick which featured a broody singer and a regular girl who marry under the influence in Las Vegas. Play is a completely different type of book in tone primarily because of the male lead, Mal.

Mal is the drummer of Stage Dive and he provided the comic relief in Lick. He’s full of effortless boyish charm. Mal reminded me of a puppy–manic, super friendly, and not good with boundaries.

“Ben slung an arm over Mal’s shoulders, ruffled his hair. “Come find another toy.”
“I am not a child.” Mal pouted.
“How about her?” Ben pointed to a sleek blonde who smiled and preened in response. “I bet she’d like to meet you.”
“Ooh, she’s shiny.”
“Why don’t you go ask her what her name is?” suggested Ben, patting him on the back.
“Do I need to know her name?”
“I’ve heard it helps.”

“Maybe for you,” Mal scoffed. “I just call out my own name during sex.”

There are hints that Mal suffers from a mental disorder like manic depression or something. His highs are very high and his infrequent lows are full of liquor and sullenness. I wondered if he was supposed to be portrayed as just manic due to emotional turmoil or if he was suffering from something more chronic. The reaction of his bandmates to his behavior suggests it was more chronic.

Anne begins the book as somewhat of a doormat. She lent money she couldn’t spare to a friend who takes off, leaving Anne without funds to pay for rent. She doesn’t have a boyfriend but she doesn’t appear to mind being the back up booty call for a friend who just happens to be her boss at a bookstore.  Anne doesn’t exactly learn to have more boundaries as the book goes on but she does stand up for herself, realizing that she’s better than being a back up and she deserves a guy who won’t hurt her, including Mal.

Anne meets Mal at a party held at his bandmate’s new apartment. Mal is looking for a distraction and finds it in Anne. He moves into her apartment before she can say another word and declares to the world that they are a couple. At first, their couplehood is faked. Mal tells her that she can use him as a buffer and Mal uses Anne for entertainment. Their fake couplehood is carried out to truly hilarious lengths.

In one scene, her neighbor–and friend–is having very loud sex and Mal decides that they should have a loud sex competition which involves yelling out and the two of them jumping on the bed until it breaks.

“You’re such a nice girl, Anne,” Mal projected for the sake of our neighbors. “I really like you a lot.”
“Seriously? That’s your version of sex talk?”
“Let’s hear you talk dirty, then. C’mon.”

“Coward.” Mal turned his face to the wall we shared with Nate and Lauren. “You taste so fucking good.”
“Like what?” I asked breathlessly, thigh muscles tightening. The man was lucky I didn’t just attack him with my vagina. “What do I taste like?”
“Well, like honey and cream and…I dunno, bread?”
I scrunched up my nose. “Bread?”
“Yes. Sexy bread that I could eat all the time because you are so delicious and full of wholegrain goodness.”

The story moves into more serious territory toward the end and I was surprised by how both the humor and the sadness came off equally strong. It was funny, sexy, and had a nice touch of poignancy at the end. Whether I completely bought Mal as a stable enough guy to have a long lasting relationship is up in the air. His mania seemed almost too frenetic at times not to be the function of a more serious and underlying problem but it was well hidden under charm and funny lines. B

PS. If you are interested in the audio, here is a sample.