In our archives is this review by our own Amy of Assassin’s Gambit by Amy Raby. The BookPushers also have a review and Has has been recommending the book to me for ages. It’s been almost a year since its publication, but I finally picked up Assassin’s Gambit, a fantasy romance set in a late 18th/early 19th century technology level version of the Roman empire. 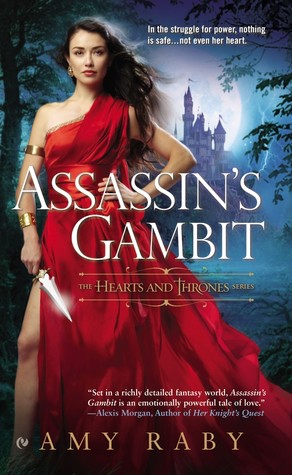 The assassin of the title is the heroine, Vitala Salonius. Vitala comes from Riorca, a small country subjugated by the Kjallan empire. The Riorcans are under Kjallan rule and many are enslaved in Kjall, so as the book begins, Vitala is on a mission to assassinate Lucien Florian Nigellus, the emperor of Kjall.

The Riorcan resistance organization known as the Obsidian Circle has assigned her this task since Vitala was a young girl, and prepared her for killing Lucien before it was known he would be the one of the emperor’s sons to take the throne.

The Circle believes that killing Lucien will trigger a battle for power between contenders with little claim to the succession, and this will throw Kjall into disarray, enabling Riorca to overthrow Kjallan rule.

To this end, twenty year old Vitala, Kjallan-looking and the product of a Kjallan military man’s rape of her Riorcan mother, has been trained not only in seducing men, breaking the magical wards that protect them while they are distracted by orgasm, and executing them, but also in catarunga, a strategy game Lucien loves.

Twenty-two years old and missing a leg due to an earlier assassination attempt, Lucien is a brilliant leader on the battlefield. He’s also an enthusiastic catarunga player, and every year he invites the winner of the Kjallan catarunga championship to his palace and challenges that person to a game.

Vitala is the current champion, and the first of Lucien’s invitees to best him. They play a few games and she issues a subtle invitation to her bed, where she intends to carry out the assassination despite an attraction to Lucien, almost a liking for him, and an appreciation for his clever mind.

Just then Lucien must travel with troops to confront bandits plaguing a Kjallan city, but he invites Vitala along. While they are having sex in his tent, two things happen. First, Vitala experiences a post-traumatic stress flashback to her first experience of seducing a man to execute him, and second, Lucien is attacked by a group of men in a coup meant to overturn the leadership of Kjall.

The men drag Lucien out and decide to take turns raping Vitala. While alone with the first of them in the tent, Vitala kills that man during his rape of her. She then realizes that the Obsidian Circle’s information is incomplete. Perhaps another Kjallan has a strong claim to the Kjallan throne and killing Lucien will only make the succession easier for that man, not harder.

On impulse, Vitala kills Lucien’s captors, fakes Lucien’s death, and helps an injured Lucien to escape the military encampment, only to force Lucien to head north with her, in the direction of Riorca. Lucien agrees because despite Vitala’s lies, he deduces that she is from the Obsidian Circle and to retake his throne, he needs to ally with them and obtain access their spy network.

There is so much going on in this book and it’s hard to discuss it all,  but I thought one of the most interesting aspects of the book was the dynamic between the characters.

What I loved about it was that though strong-minded and clever, Lucien was neither brawny nor domineering. His disability was real and impacted him physically when he wasn’t atop a horse. His prosthetic leg pained him and didn’t solve all his problems via magic. He also didn’t strike me as being quite as proficient at killing as Vitala, and I think it could be argued that her magical powers were stronger than his as well.

Some of Lucien’s countrymen viewed him as weak because of his disability, or had no respect for him. But none of this prevented him from thinking strategically and commanding well in the field. None of this stopped him from showing a ruthless side to his enemies when he had to, or a softer side with Vitala.

Vitala meanwhile was no fake assassin. Her past was very dark, and she could probably out-kill every character in this novel. This may not be a skill to be proud of, but it runs contrary to the way women are usually portrayed in romance fiction and when combined with Lucien’s characterization, it made for a truly fresh dynamic between the two characters. They really were equal; this wasn’t a case of one constantly besting the other.

In fact, Lucien was more vulnerable to physical harm for a good part of the book, and Vitala served as his bodyguard, protector and rescuer during this portion. Later in the novel, Vitala’s is surrounded by people who distrust her and her psychological trauma comes to the fore. At this point Lucien is able to repay her with care for her feelings.

In her review, Amy says that there wasn’t enough detail given to visualize the world and I agree with that sentiment. I wanted more visuals and also, a deeper sense of the cultural differences. The magical system was fascinating but I would have loved to learn more about how the objects used by the characters were imbued with magic and see this process in action too. There was a lot of swearing “godsdammit” but no real sense of the gods or their mythology.

Amy also talks about the way Vitala waves away her rape. I came to the same conclusion about this—that it fit Vitala’s character. Not only is she trained in putting aside her personal wants to sleep with her marks in order to kill them, but she is also a type of soldier and therefore cannot afford to focus on trauma while in the field.

Her PTSD with regard to her training is something she cannot suppress, and here I really appreciated that her mental illness was not cured. She figured out ways to cope with it, but it didn’t magically disappear.

Vitala insisted throughout the book that her training was her choice, and made no apologies for what she was. But she was only a teenager when she was trained in killing, so there were questions in my mind about how much of this truly was her choice, and how much of her statement that it was her choice indicated that she couldn’t fully perceive how limited her choices had been, as a young person born of rape and of two enemy nations/races.

The difficulties Vitala faced since childhood aren’t ignored. Full-blooded Riorcans are blond while Kjallans have dark hair, so Vitala’s hair color marked her as an enemy to her countrymen and countrywomen. Using hair color instead of skin color to indicate race difference means that skin color doesn’t come up in the novel, though.

This book is not for the faint of heart; a lot of bad things happen. Characters are discriminated against. Characters are raped, killed or do horrible things. The flashbacks to Vitala’s childhood reminded me of some of Nalini Singh’s Psy/Changeling books where we see the Psy characters’ childhood training in the hands of people who sought to use them.

Yet despite this, the tone of the book feels almost breezy at times. A fully realistic, gritty, in depth treatment of all the issues that come up here would have made the book at least twice as long and much tougher to read.

There are multiple problematic aspects —the slavery issue isn’t solved nor is it explored that much. The ramifications of rape and of recruiting children to kill are explored more but not fully either. But nor are they treated thoughtlessly, and for the characters to fully reform and entirely change their thinking by the end of the novel would have been too hard to believe.

For a debut this book is strong. It kept me turning the pages and was hard to put down. I thought Vitala began to like Lucien too early in the novel and that he trusted her with sensitive information sooner than was warranted, but a big part of what made this book work for me was the balance of power between the characters, which shifted so many times and in such interesting ways. Between that and the fact that the main character were not the archetypical dominant alpha hero or the archetypical “virtuous” heroine, I’m giving this one a B-.