REVIEW: Mnevermind 2: Forget Me Not by Jordan Castillo Price 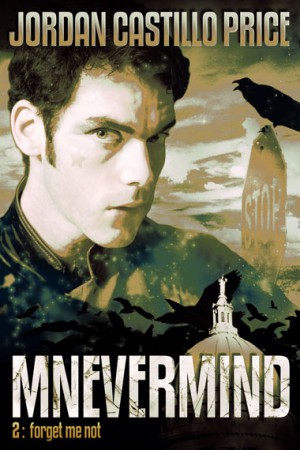 No two people are exactly alike, but Elijah Crowe is very, very different.

Elijah is on the autism spectrum, so the tasks of day-to-day life most people breeze through are a challenge for him. His career suffered because he never got the hang of schmoozing, and now he wastes his talents teaching classes at the mall. His social circle is limited to his ex, his therapist, and a structured inclusion group at the Rec Center. The one bright spot in his life is the memory science of Mnemography.

Although he loves nothing better than devouring the latest research and tinkering with all the specialized equipment, he never clicked with any other experts in the field until he met Daniel Schroeder. Daniel runs a memory palace—he even writes his own mnems—and that shared interest alone would make him fascinating. But Daniel and Elijah met under unusual circumstances, where the statement, “I like you, and I think you like me,” held some surprising nuances.

Now Elijah suspects he’s gay, but the few prominent people in his life are less than supportive. Some are downright hostile. Elijah might not be neurotypical, but he’s plenty smart. Surely there’s some way to get people to accept him for who he is. If only he could figure out how.

In the second part of your trilogy you took this story where I did not expect it to go, but that is a good thing. Elijah and Daniel have a chance to get more closely acquainted with each other and the situation with Daniel’s father may change very significantly in the last book of the trilogy. I guess considering Elijah’s appearance in the first book, I expected him to be somebody magical? He turns out to be very ordinary, but also very real and interesting character. I think that cliché “the character jumps from the page” is a very appropriate one here. Elijah is a narrator in this part of the story. Since blurb has this information, I do not think it is a spoiler that he is on the autism spectrum (he has Asperger’s).

I thought the author managed to portray a real person, somebody who came alive on pages of the book to me, of course Asperger is a part of who he is, but I thought that Elijah had a personality and was not just a walking embodiment of somebody with Asperger. I do however always worry in such situations when I am not talking from personal experience – the portrayal seemed very sensitively done to me, but I am only evaluating it based on what I read and based on the stories from couple of Internet friends who have kids with Asperger’s -which is obviously a brief, superficial and indirect knowledge. If you are more intimately familiar with autism, you are obviously in better position than me to judge how well Elijah was drawn.

His worries, his insecurities, his communication issues – it all made sense to me. I loved how intelligent he was, how vulnerable in several ways and how much he was willing to work for certain things he really wanted from life and from potential relationship with Daniel.

“When I realize someone is being dishonest, it seems that I react much more strongly than the average person. I’m not sure if that has to do with my spectrum disorder specifically, or if it’s just the way I am. Given how upset I suddenly found myself in mnen – angry and disappointed and devastatingly cheated- I’d guess it was a deep-seated aspect of my personality that didn’t have a lot to do with the Aspergian quirks of my brain. I turned to Daniel, only to find he’d gone off to the side, apart from the rest of the sherpas, and was now deep in conversation with Big Dan.

Already trying to work out how they could use this new technology to their advantage. A technology that was really a scam.
Tell him. Now.”

I loved that the story did not portray Elijah as somebody perfect but gave him a personality, one which is even a little abrasive I guess? It is funny because in the author’s note at the end of this story there are some comments which for my taste go a little too much towards author’s explaining the story and character and there is a comment that she wanted to give Elijah a personality with a touch of abrasiveness. I guess I was kind of two minds when I was reading it – I was amused that I interpreted it the same way, but also preferred not to read the explanation.

Elijah and Daniel’s relationship also moved forward a bit, even if it made some steps back. I liked seeing how while Elijah and Daniel were different in some ways, they were also similar in others. Both tried to research things they were unsure of about whom other person was. It was both funny and touching for me to read.

I also liked that Elijah’s view really helped to learn about Daniel’s personality. While I have absolutely nothing against a well written story with multiple POVs, way too often I feel that it is unnecessary to constantly switch POVs and wish that author was able to show me the second character’s depth through the other guy’s eyes. I think the author did this admirably well in this book.

I always liked secondary characters in her books – male and female – and this story is no exception. Elijah’s female therapist, his former wife, and Daniel’s employee Carlotta all feel like human beings in their own right and none of them felt perfect to me or caricatured. And the interesting part is that one female character in this book does feel like a bully to me (Daniel’s mother) – she is not a caricature either. However, barring some dramatic reversal in the third book, I seriously doubt that I will like her. And I am perfectly okay with her – I do not feel the need to grind my teeth and wish she would go far away from the story, because she feels like a person. People like her exist, even if I cannot stand them.

Again, I liked where this part of the story ended, but you definitely cannot read it as a stand-alone, and it does not provide any real closure to the main ongoing storyline.