REVIEW: Crash and Burn (Cut and Run, #9) by Abigail Roux 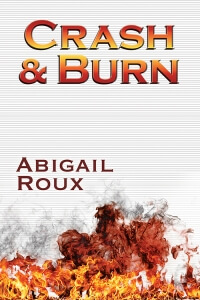 It’s been five years since Special Agents Ty Grady and Zane Garrett first worked together to solve the Tri-State murders, and time has been both harsh and kind. Engaged now, they face the challenge of planning a deeply uncertain future together. Zane is at the pinnacle of his career with one last mystery to solve, while Ty is at sea in a world where he’s no longer the tip of a spear.

There’s just one more hurdle in the way of their happy ever after: a traitor from their inner circle who threatens to burn their world to the ground.

Squeezed between the Vega cartel, an unknown mole, and too many alphabet agencies to count, Ty and Zane must gather all their strength and resources to beat the longest odds they’ve ever faced. To make it out alive, they’ll need help from every friend they’ve got. Even the friends who might betray their trust.

I still remember when, soon after the release of “Cut and Run,” a book buddy insisted that I had to read it. So I read it and we argued about whether the book needed a sequel, and we agreed that at least one more would be nice. And the rest is history. I fell in love with the first book because Ty and Zane started with an antagonistic chemistry, and while that quickly changed into something more, it never lost that edge for me. Yes, even in the first book I noticed that these two are not the sharpest tools in the drawer. Starting maybe in the middle of the story, I wanted to draw a big picture of the villain and smack them on the heads to make sure they noticed. But despite quickly realizing that I wouldn’t be reading this series for intelligent detective work, I had no intention of stopping because I loved Ty and Zane that much. And in books two and three (especially in book three if I remember correctly) the mystery was pretty decent.

I promise I won’t be giving you a recap of how I felt about all previous eight books in the series. The reason I mention it is because I was very disappointed by the eighth book, in which I felt that Nick (Ty’s friend who by that time had his own series) took center stage at the expense of Ty and Zane. I was still going to buy this book since it was the last one in a series I had invested a lot of time and money in, but I had very low expectations to start.

I am happy to report that I liked this book more than I expected. Even though Nick still plays a big role, Ty and Zane are the stars of this book (for me anyway, obviously your mileage can differ) and that’s how I like it. There are plenty of tender scenes between them, in bed and out of bed, and a lot of action, *a lot* of action. I never thought I would say it about *any* m/m book, but in the previous book I, of all readers, missed the sex between Ty and Zane. I really missed it. But there was a plenty of it to satisfy me in this book. I am also happy to report that Zane knew how to use his knives again. I thought he had developed amnesia about that in the last book (and many other things, but strangely this small thing was one of the most annoying).

We catch up with Ty and Zane when Zane, now special agent in charge, is contemplating the mystery of the “mole,” whose existence was revealed to the readers in previous books, but not his identity. After a conversation with Ty, who is now retired from FBI, Zane suddenly realizes that their home could be bugged and they take a certain action to try and counter that. And it all starts from there. Nick appears soon enough after the book starts, but not before we actually get to spend time with Ty and Zane and the action kicks in. A lot of characters from the previous books make guest appearances and most of these appearances made sense to me. It is really hard for me to talk about all the action without revealing spoilers, so I will try not to, but I have to talk generally about the *big reveal of the Big Bad*. So, the reveal in some ways rocks the foundation of the series – not who Ty and Zane were and are for each other, but the reader will be rereading a lot of events which will now have to be seen in a different light. It is just impossible not to do that given what happens in this book.

Did the reveal work for me? No, it did not. Not because of the reveal itself, because it is always fun to gasp at the end of a multi-installment mystery and realize that the character/s is/are not who you think they were. It did not work for me because when I go back and think about past events in light of the reveal I need to see the clues planted in places which I did not catch at the time and to be able to say “Aha. Now I realize what I missed and why”. And here it feels that the writer kept the cards close to her chest and said at the end – now I will wave the magic wand and pull the rabbit out of the hat and everything that you thought you knew is now wrong. To use JK Rowling’s words (I think she was the one who said that you should trick the reader but not cheat her), I like to be tricked, but here I felt that I was cheated, because so many positive relationships with this character are now, well, part of the web of deceit and lies. But I want to be clear, putting my emotional reaction aside: I just do not think that this reveal — if it was the end game, the end mystery — I just do not think that it was plotted well.

This also has nothing to do with suspension of disbelief, because believe me, the whole plot of this book (what they were trying to locate, whom they were after and who was after them) required a massive suspension of disbelief and I was totally fine with it. Right from the beginning of this series, nine books ago, the plots were over the top and I was completely on board. The big reveal, though, needs to be consistent in the universe of the series, and for me it was not.

Good bye Ty and Zane. I do not follow the “Sidewinders” series so I am not going to see you if you make guest appearances there. Thanks for the ride. And I want to thank the Goodreads reviewers who mentioned a vignette at the very end of the book, because otherwise I would have totally missed it and it was very adorable.