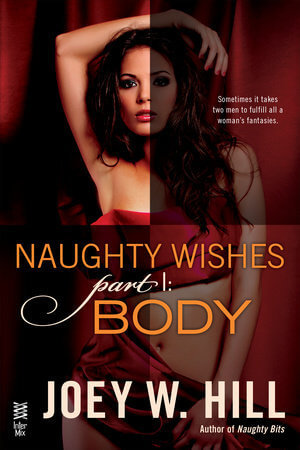 Naughty Wishes is the story of three close friends, Samantha (known as Sam, an assistant bank manager with intrinsic submissive tendencies), Geoff (an attorney with intrinsic Dom tendencies) and Chris (a landscape gardener who is, at the start of the story, a bit of a mystery, sexually speaking). The men have been friends since primary school. They met Sam when they (literally) rescued her from being beaten by an abusive ex-boyfriend. (This could be an issue for some readers. There is a very brief description of the beating and a short recap of the former relationship and then the story moves on and domestic abuse is no longer an issue.)  Sam quickly moves in to the spare bedroom in the apartment Geoff and Chris (platonically) share and they all soon become close friends.

I think the abuse storyline is there to explain (at least in part) the speed of the move and also to show that Geoff and Chris are super protective Alpha-types and that Sam is not a doormat despite her submissive tendencies (she had broken up with the guy once he started treating her badly.) It was a rather blunt instrument and unnecessary.

Sam has finally had enough of tiptoeing around the issue. Her co-worker, Flo, an older Domme, has given Sam some advice and Sam has decided she is going to force things. She figures, rightly,  the guys have made no move on her because they had never considered a triad relationship.  Sam loves both  men equally and could not, would not and does not want to, choose one over the other. Neither man is willing to risk their friendships by making a move on Sam and cutting the other one out.

For Sam, the key to the problem is getting Geoff on board. He is the natural Dom in the group and because reasons Sam thinks it’s most important they make a sexual connection first. Chris is away working and Sam makes her move, forcing Geoff to admit the desire they have long felt for one another. I can’t help but think this decision was more one of plot than dictated by organic character development.

When I thought about the likely trajectory of the novellas, it seemed to me that the first one (“Body”) would feature mainly Geoff and Sam, the second (“Heart”), Chris and Sam, the third (“Mind”), Chris and Geoff and the final one (“Soul”) would be all three together. (I don’t think it’s a spoiler to say that I was right.)

I have all four parts on my reader and I’ve read three of them already but I decided to take a break before finishing off the final novella in the series. I needed a little palate cleanser. Again, because the books are meant to be read separately, I felt I was doing a disservice to the story if I glommed them all at once. But the fact is, read all at once, they do become a bit “samey” even though each of the novellas covers one aspect of the trio’s journey to a physically mutual relationship and therefore have distinctly different characteristics.

This is a group of friends who love and adore each other. There is some set up and a lot of showing over the course of the stories that they do, in fact, already love each other. What has to change to give them their HEA is the physical. As it is an erotic romance, it ought not be a surprise there is a lot of sex. A lot. Which is great. It’s creative and inventive, hot and tender. But after a while, it becomes like too much anything. Even excellent chocolate can make you sick if you have too much of it, after all. I found myself feeling “overfull” during my read of part three (in addition to other issues I had with the story which I’ll go into in my review of that novella) and decided to read something completely different in between it and the final part.  Frankly, I think the characters could use a rest too (because in my head, nothing happens unless I’ve read it. So I’ve left them frozen in time and resting up for round 4. It’s like a gift.)

“Body” focuses therefore mainly on Geoff and Sam. While Sam is the submissive, it is she who has to make a move before anything can happen. Clearly Sam subscribes to the “go big or go home” school of seduction. It is not without some hiccups and missteps along the way but underlying their physical attraction is a deep and abiding love for one another so there really is never any question it’s not going to work out.

Sam is the only POV character in “Body”. I appreciated the way she noticed things about Geoff and how they made her feel. Even though there was a lot of sexy sexing going on, it was not at all without emotional connection.

When they had sex, a lot of guys turned inward, their focus on getting off, even if they were still being reasonably generous and making sure she was headed the same way. Geoff’s focus had never left her. It was as if controlling and directing her climax, her responses, was as much a component of his release as the proper friction on his cock. For a Dom like him, maybe it was.

The trio do not reach their HEA until the end of the fourth novella of course. “Body” ends on a small cliffhanger but I didn’t find it frustrating. Admittedly, I did have part two to read immediately, so there’s that. But even so, I think it’s just really obvious where all this is heading so there’s not much cause for real worry. The novellas are more about the “how” than the “what”. And that’s fine.

My favourite kinds of menage romances are MMF and that’s what we we are heading toward here. Menages are ausually the story of how the trio meet and get together and there isn’t a lot of how they go on with their lives (it just doesn’t feature in a courtship tale). Here, we have an established group where the love is genuine and strong, where they already live together in harmony, but they are adding sex into the mix. So, in some ways, it promises to be deeper (or at least, different) look into a menage type relationship I think.  I’ll let you know in my review of part four “Soul”.

For now, part one, gets a B from me. It wasn’t without some issues but overall, I really liked it. Readers are advised to have some cold water handy.