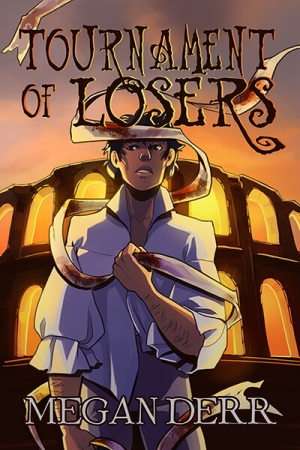 All Rath wants is a quiet, peaceful life. Unfortunately, his father brings him too much trouble—and too many debts to pay—for that to ever be possible. When the local crime lord drags Rath out of bed and tells him he has three days to pay his father’s latest debt, Rath doesn’t know what to do. There’s no way to come up with so much money in so little time.

Then a friend poses an idea just ridiculous enough to work: enter the Tournament of Losers, where every seventy-five years, peasants compete for the chance to marry into the noble and royal houses. All competitors are given a stipend to live on for the duration of the tournament—funds enough to cover his father’s debt.

All he has to do is win the first few rounds, collect his stipend, and then it’s back to trying to live a quiet life…

I will be honest – normally, when I see a book that employs a trope that reminds me of “Bachelor/ettes” reality shows, I give it a side eye and keep walking. But this was Megan Derr’s book and I rarely pass by her longer works, and since reviews by my buddies seemed to be positive, I clicked. It was very entertaining, so I am glad I did. The premise for this book is that once every seventy five years the kingdom conducts a Tournament, giving the poorer subjects a chance to compete to marry lots of nobles. This is done in order to add fresh blood to the highest classes – there are seventy or more chances to get oneself married (barons, dukes, and even the royal family participates). The legend says that one of the previous Queens (Regent Charles) established the tournament in honor of a peasant woman who saved the kingdom when it fell on bad times, whom the Queen fell in love with.

Of course the obvious question I had was, what happens if noble families do not have candidates of marriageable age when the tournament year comes, but I hand-waved it and moved along.

Our main character Rath (aka Rathatayen but unsurprisingly he prefers to go by Rath) just wants peace and quiet. He works all kinds of jobs for very little money in order to survive, but he also has a no-good father whom Rath constantly needs to save from situations the man gets himself into. Now his father owes a lot of money which he cannot pay back, and Rath’s attempts to come up with so much money are unsuccessful. Then a friend suggests that he try participating in the Tournament, because if he gets into the second round he will get a stipend, and it may be enough money to save his father again, for a little while anyway.

Rath is not eager to participate at all – he may have dreamed about the Tournament when he was much younger (he is thirty three when the story begins ), but now he believes the Tournament is rigged so that nobles ensure the winners are those whom they want their sons and daughters to marry anyway. But Rath eventually signs up, because he does not think he has a choice – whether you would find that convincing I do not know. I could have come up with more choices for him, but once again it was easy enough for me to believe this development.

For the most part I really enjoyed the Tournament – especially the challenges and how participating in those challenges made our hero shine. We see the street smarts and noble heart of someone who may have gotten beaten up by life, but who surely was not as cynical as he pretended to be when push came to shove.

I will let you to find how well Rath did in the Tournament and what reward he received (if any), but I will tell you that while our hero is playing in the Tournament, he is also finding out that one of his casual hook ups may be somebody he may want to give his heart to – it is a lovely slow burn romance and I enjoyed how the writer managed to move this storyline along together with the Tournament one.

I thought the world building was not particularly detailed, but for the purpose of this story it was enough for me. Once again I liked how the author put matter of fact touches here and there in the story, for example, none of the main characters are white. I loved that “intersex goddess” is casually mentioned; men and women fall in love with each other without anyone blinking an eye as it should be. I liked that world even if I would have liked to learn more about it.