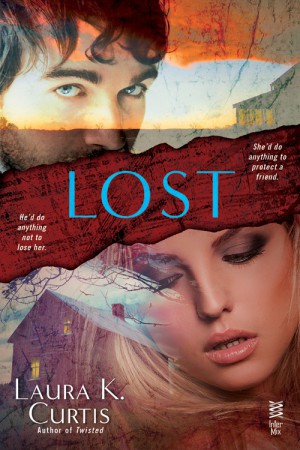 My TBR pile is completely out of control.  It contains your first book, Twisted, reviewed here by Sunita.  When I had the opportunity to review Lost, I tweeted you to ask whether it could be read as a stand alone before I accepted.  You told me it could but that it contained mild spoilers for the first book. Lost does stand alone well but I would think it’d be a slightly richer reading experience having read Twisted first because it is clear that both Tara and Jake had fairly major roles in that first book.  I didn’t have any trouble understanding what was going on – enough was explained during the course of the story and it wasn’t done in an info-dump-y way so that was another bonus.

Having now read and enjoyed Lost, I am now plotting to bump Twisted up the reading list.  Wish me luck.

Tara Jean Dobbs, currently known as Tara Jean Black, left Dobbs Hollow after the events in Twisted.  She was formerly a police officer there but whatever happened has caused her to re-evaluate her life.  She quit her job, changed her name and drifted for a bit.  While working in a small diner in Twin Oaks, Texas, she met and befriended Andrea.  Andrea and she visited a commune/religious community nearby – the Chosen, where Andrea’s distant cousin John lived and worked.  After a while, Andrea decided to forego life in “the Outside” and become one of the Chosen.  Tara thought it was a fairly harmless community – very regimented but largely self-sufficient (they grow their own produce and make their own butter etc) and for people such as Andrea, who wanted relief from the pressure of money and work and the constant decisions required by independent living, it represented a safe haven.   People are free to leave the community and Tara had visited on a number of occasions.  However, when Andrea (renamed Pearl by the Leader of the Chosen) stopped writing, Tara became concerned and decided to join the Chosen in order to find out what happened to her.

When the book starts, Tara (renamed Serena) has been living with the Chosen for five weeks.  Her friends, Lucy and Ethan (the protagonists from Twisted) became worried about her being out of contact and send Jake Nolan to look for her.  Jake is a former FBI profiler who specialised in data analysis and computer programming… er, things.  “Jason Norman” (renamed Jacob) arrives at the commune with the story that Tara was his fiancee, they had fought and she’d run away. He had been searching for her to try and make things right.  Because of his contacts within law enforcement, he had planted a convincing cover online to back up his story.

While Jake’s mission is merely to get Tara out, Tara will not leave until she has discovered the fate of her friend.  Together they investigate under the increasingly watchful eyes of the Leader and his apostles, along the way, discovering there is much worse happening in the Chosen’s compound. The more they discover, the more determined they both become to take the bad guys down.

Jake and Tara have some history.  Both were immediately physically attracted to one another when they first met in Dobbs Hollow and because they had Lucy as a common friend, they knew a lot about each other.  For reasons which weren’t entirely clear to me (because I haven’t read the first book) Jake said things to Tara which were very hurtful and their attraction never went anywhere.   One of the first things Jake does when he meets up with Tara at the compound is to genuinely apologise for the things he said, which questioned her professional competence and her ability to be a good friend.  It was a genuine, heartfelt apology without excuses.

Jake’s and Tara’s “cover” is a romantic relationship – they need to spend time alone together to plan and debrief.  For much of the book the danger to them is not imminent and this means they are able to progress the romantic relationship without having to dodge any bullets while doing so.  The sex scenes are hot when they arrive, but Jake and Tara do take some time before they get physical.  Both think some of the things each says to the other are just part of their cover, and at one point (not without good cause and for reasons which are clear in the book), Jake questions whether Tara is actually in a position to give meaningful consent to sex.  It was a little disappointing that the thread didn’t go anywhere. He didn’t talk to her about it and it didn’t stop them from having more sex.   From a readerly standpoint, I never had the impression that Tara was acting from anything other than her free will when it came to sex with Jake so it wasn’t a big problem, but, having raised it in the story, I would have liked to have seen it played out.

I remember Sunita appreciated the agency of the heroine in Twisted and the same holds true for Lost.  Tara is intelligent and, while it was perhaps not the wisest decision to embed herself with the Chosen (to be fair, initially she just wanted to check that Andrea was not being held against her will and things kind of spiralled from there), her actions afterward never went into the realm of TSTL.  The Chosen is set up in a very patriarchal way so Jake is able to move around more easily and get access to things Tara cannot.  In some ways I lamented this because it put Jake in charge.  However, he did have more relevant experience, having been involved with various task forces while with the FBI so it wasn’t unreasonable in the circumstances.  I liked that Jake always included Tara and they talked things through and made decisions together and he asked for her help with things he could not get near or which were not within his skill set.

There were a couple of continuity errors I picked up – I had an ARC so perhaps the final for sale version has fixed those things – and there was a rather extraordinary feat of physical athleticism which strained my credulity near the end of the book (driving two miles, leaving a false trail and jogging back those two miles with a heavy pack and a gun in something less than four minutes? Really?)   (ETA: The final version of the book has this taking place in ten minutes, not four. That’s much closer to believable for me.) but most of the book seemed alarmingly plausible. I did think the end became a little melodramatic but that maybe because things picked up in pace by a factor of 1000 and  I had been lulled into a false sense of security.

Some of the secondary characters were quite compelling even with only relatively short time on the page.  I admit to being curious as to what would happen with Kevin and Bea.

Tara’s experiences during the course of the book were not treated lightly and it was acknowledged that she would be forever changed by them, including that she would need therapy.  Because of the uncertainty of their future in terms of what they would do next and how things would go with Tara’s recovery, I think the ending could best be described as happy for now. But that suited the story and I was satisfied with it.  To have gone further would have felt wrong I think.  As Lucy and Ethan appeared in this book, I am hoping that Tara and Jake might also appear in future books and readers might get to check in on how that happy ending is working out. Future books I definitely plan on reading.

I’ve been a fan of romantic suspense for years but lately, I admit to being a bit jaded by outrageous plots which are too conveniently solved, sex when the bullets are flying, romance which is not romantic and suspense which is not suspenseful.  Lost succeeded for me both in terms of the romance and the suspense. Tara and Jake had chemistry and their love for one another was built on a solid layer of mutual respect, which was a plus. They came across as smart and mature and that is always a pleasure for me to read.  At about the 70% mark, the tension ratchets up and I was completely invested in the outcome and worried it wasn’t going to work out. (It does. It’s a romance. But in good romantic suspense, you should be worried, I think.)

I had a few niggles with the story but for the most part, this book was a win.  I give Lost a B.