REVIEW: Madam, Will You Talk? by Mary Stewart 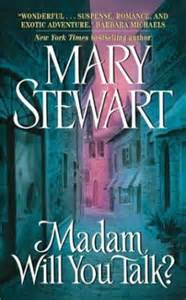 A few months ago, a friend of mine asked me to help her clarify something from this book. She needed to know a fact from it but didn’t have her copy handy. Did I have the book and could I look it up? Of course I had a copy – several, in fact, I think – and I was happy to pull it out and start reading. With the reading going smooth as silk, I was soon lost in the opening scenes. The needed fact was, unfortunately, quickly clarified and with several other books waiting for my attention and possible reviews, I reluctantly put this one aside. When I heard the news of Stewart’s passing, I began a frantic search for where I’d laid the book because, even though it’s not my favorite, I just knew I had to read it now.

Charity Selbourn and a friend from her former teaching days are on a much deserved holiday in the south of France. As Charity settles into her room at their hotel, she becomes acquainted with a young English boy and his slightly out-of-control mongrel dog named Rommel. Giving his name as David Shelley, the two chat a bit about English Romance poets and it’s at this time that Charity gets the unmistakable feeling that David has faced some awful event in his life which has aged him past the knowledge a 13 year old boy should have.

During that civilized French custom of l’heure d’aparitif, Charity sees and guesses at the nationalities, professions and details of her fellow hotel guests much to the amusement of her friend Louise. Later she meets up with one of them who fills her in on the grisly details behind David’s unhappiness. His father was accused, though acquitted, of murder. It was a Crime of Passion during which David was knocked unconscious and, as the newspaper headlines will have it, Richard Byron must be unhinged.

Since indolent Louise isn’t interested in sight-seeing, Charity has the idea of asking David’s step-mother if he can join her for a day outing. It’s then that Charity learns more than she wanted to know about Richard Byron who is hot on the trail of his son, a son who acts terrified of him and begs Charity to hide him from his father.

The plot thickens when Richard, knowing Charity must be hiding his son from him, tracks her down. A game of cat and mouse ensues with Charity embroiling herself deeper and deeper in a game of murder. Unless she discovers the truth behind these events, she just might be the next in the sights of a cold-blooded killer.

There are certain books which I find myself slogging through and some magical ones which flow like a powerful river, pulling me in and sweeping me along almost effortlessly. Most of Stewart’s books are the sweeping kind. Before I knew it, I’d read almost half the book and only put it down only for the necessities of life.

There are lots of similarities among Mary Stewart’s romantic suspense books. Usually the setting is exotic – or would have been so when the books were first written, the heroine is either young or slightly naïve, the identity of the hero might be in doubt, police presence is light to non-existent, and the heroine is quietly but quickly swept into a situation far beyond anything she’s ever encountered though the driving force behind the plot remains a mystery. These books generally feature ordinary, every day people placed in circumstances they never anticipated or are initially prepared for but the hero and, especially, heroine rise to the occasion and see justice done and wrongs righted.

Yeah, that paragraph pretty much sums this one up but let me delve into what makes it special. I love the chapter headers from famous English literary works with which Stewart would have been well familiar. In reading the various obituaries, I found it sad that she had been unable to accept positions at either Oxford or Cambridge which her intelligence had secured for her. But her knowledge shows in the characters’ intelligence. Charity casually associates Yggdrasil with a tree in the courtyard of the hotel and she and Richard can quote poetry and lines from Shakespearean plays to each other with ease.

The descriptions of the food are to die for. But along with that is the understanding of how important well prepared food is to the French soul. It’s national honor on the line with each meal and the whole is taken quite seriously. It’s a joy just to read about.

I can also see the locations in the south of France. The towns, roads and flora of the region jump off the page. I can see the heat shimmering off the scree of white rocks with harsh green juniper hanging on for dear life, the chalky dust rising from the winding roads, the prickly plants, the golden-amber shafts of sunlight slicing through shutters closed to hold out the afternoon heat with the only relief to be found in the shadows. I’ve never been to Provence but because of this book, I’ve “seen” it. I also love the descriptions of how to drive in France – full on, peddle to the metal, horn blaring and not giving an inch.

Reading Sunita’s excellent review of “Wildfire at Midnight,” brings to mind things which didn’t bother my much younger self when I initially read most of Stewart’s books. Everyone smokes like a chimney and drinks like fish albeit with a casual sophistication and elegance. Charity is not quite as naïve as other Stewart heroines being a widow who lost her RAF husband during the war and who had at one point had to support herself as a teacher. Her husband introduced her to fast cars and thankfully Charity learned to handle them and to relish speed. She does a fair amount to save herself and David and the only blunder she commits is due to a lack of knowledge rather than being stupid.

One thing my older self enjoyed more this time around is that Charity’s first husband, Johnny isn’t demonized or made into an angel. He was a man with some faults but also lots of strengths. He loved Charity and she loved him. But she hasn’t turned him into some saint nor has she sworn never to love again and put herself on a shelf to worship at his shrine. I’m also not usually one to buy into love at first sight and though that doesn’t really happen here, love does come as kind of a thunderbolt yet I still believe in it which says something about the way Stewart can convey emotions.

The men of the book tend to be on the take-charge side but then as Louise reminds Charity, she seems to like her men that way. The hero might come off as a bit high-handed even after the initial misunderstandings behind his attitude are explained. Stewart also indulges in a little stereotyping of Frenchmen though in one case it serves to help Charity along during the chase to Marseilles. The term “negro” is also used at least twice and though it doesn’t appear to me to be used as an outright insult, still the word is there and this could be a trigger.

As to the reason behind the plot, there’s no hope of guessing it early on. The details don’t begin to be revealed until the final third of the story and one character becomes a deus ex machina during the finale. Even after the villains are vanquished, an ending wrap-party is needed in order to tell the whole.

This novel appears to be a favorite of several DA readers and would, I think, serve as a good starting place for new readers as it has many of the standard elements Stewart included in several of her suspense books. If you go into it realizing that it does have some issues which date it and that the clarity of the resolution gets a bit blurry, you’ll probably do just fine with it. The evocation of the locale, the food and the characterization are more than worth the price of an admission ticket. B+

→ Jayne
Previous article: JOINT REVIEW: Bollywood and the Beast by Suleikha Snyder
Next Post: Uses and Abuses of Girls