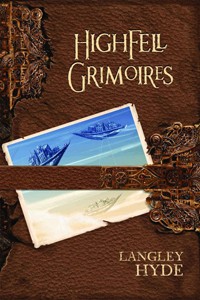 Born to privilege and gifted in languages and spells, Neil Franklin has planned his brilliant future well. From academic accolades to finding a proper marriage he is intent upon upholding his family name and honor. The sudden death of his parents shatters all of that, leaving Neil and his younger sister beggared and orphaned. When Neil’s estranged uncle offers him a bargain that will save him and his sister from debtor’s prison or exile, Neil eagerly agrees. Handing over the family grimoire as collateral for his debt, Neil devotes himself to working as a teacher for wayward youth at a boarding school high in the clouds. But Highfell Hall is not the charity Neil imagines it to be and the young men there aren’t training for the dull lives of city clerks. Amidst the roaring engines and within the icy stone halls, machinations and curious devices are at work. And one man, the rough and enigmatic Leofa, holds the key to both the desire that Neil has fled from all his life and a magic as dangerous as treason.

I love being transported to the fantastical worlds of all kinds, and I became very excited when I read the blurb because this general description could mean so many possibilities for interesting world building. In the world building department your book delivered in spades. I think it is loosely based on British Empire, but I wonder if there were other references that I may have missed and that indicated other influences as well. Not only did I feel as if I travelled to a different world, but I really liked how you got me there. I do not like reading long, info-dumping paragraphs at the beginning of the story, but I realize how hard it is for the writer to find a place and a time to feed the reader information about the new world and make sure that information moves the story forward. I really think that it was done very successfully in this book. I was thrown into the story without any of the characters stopping the action in order to tell me all about the world, but when I needed new information in order not to get lost, I received it.

Making Neil a teacher was helpful for that. He could tell stories as part of his teaching and it felt natural rather than coming across as info-dumping, to me anyway. As the blurb tells you Neil Franklin is the main character in this book. We meet him at a painful time in his life. His parents are dead, they left him with debt and his uncle, being the kind and generous person he is (at least Neil thinks so at the beginning of the story) allows Neil to teach at his school for orphaned boys. Neil says temporary good- byes to his beloved sister Nora, who will be staying with his uncle and whom he won’t be seeing as often as he would like, and goes to teach at the boarding school (which as the blurb tells you is located high in the clouds).
What is happening in the boarding school is not at all what idealistic and naïve Neil would have imagined and the reader is going to have to find out for herself what it is really about because this is where the main plot of the book unfolds. You can probably guess that school located high in the skies means that a lot of steampunk machinery is being used for this and other things located high in the skies – I thought some of it was very amusing.

“Grimoires, inherited either through the mother’s or father’s bloodline, stood not only symbols of ancestral power but also granted the peers the very true power. Protected by bloodlocks, within the leather-bound covers, spells were wired into the pages. Proprietary, exclusive to the family, the spells could heal or harm. Some ancient spells held the potential to propel forward developing aetheric technologies. Other spells, always sought after for leasing by Queen’s military, could decimate armies or bring down plague.”

These books are very significant in the story.

But let’s go back to Neil. I really liked this young Lord, who was brought down by circumstances he could not control, but who despite his naiveté and being born to privilege seemed like a really kind man to me and a pretty decent human being. At the beginning of the story Neil is set in his ways of seeing himself as a member of a higher class (because he is the member of that higher class) even though his circumstances are really not that different from the boys around him and Leofa’s. However I thought that he grew up nicely as the story progressed and showed his better character qualities pretty quickly.
I also ended up having an extra soft spot for Neil because he was so smart. I like intelligent characters (if they are not completely horrible human beings of course), and if they are decent enough – intelligence is always a bonus for me. Magic in this book is very well explained overall, but I still had to read the description of his life ambition couple of times to understand what exactly he was working on before he came to teach. And he tried to continue working on this even when he was trying to teach boys and dealing with other stuff.

“In part, I studied the more arcane languages in an attempt to unravel a particular spell in my family’s grimoire – the pyxis spell. The pyxis spell could be inscribed onto a gold-and-copper mesh that could hold aether even outside of an aetheric current. The amount of aether it could capture and preserve naturally could only power small spells – perhaps a critical healing spell or message spell, but nothing more.

I wanted to change all of that. I wanted to build a spell that would allow me to load aether into a pyxis spell. Current trapping spells, such as those used to feed aether into the turbines that kept the aesteria aloft, were incompatible with the pyxis spell.

If I could create an interface with one of these trapping spells and feed it into a gold-and-copper woven box inscribed with the pyxis spell, well then I’d have a handy little device that could capture and hold vast amounts of aetheric energy to be used at owner’s leisure.

Building this interface, which I called a transducer had comprised the backbone of my studies while at Elmstead.”

I was going back and forth about what subgenre this story belongs to – fantasy and a little bit of romance or fantasy romance, because I could not decide whether romance is front and center or not. It is definitely visible, it is important to the plot, but I am still not sure whether the romance drove the fantasy part of the plot or the plot drove the romantic storyline. In any event, whatever was there, I definitely enjoyed it. The men started off being a little antagonistic towards each other, but it disappeared quickly enough and I really liked them together and I liked that they joined forces together against the villains of the story.

I cannot tell you much about the boarding school, but I can tell you that at the beginning of the story the author thanks Mr. Dickens, so I advise you to draw your own conclusions as to what life for these boys looked like.

The author managed to make me like every single pupil in the school who was given more than a few lines, I so wanted their situation to improve. I also think that it was not a small feat that the villains did not feel like caricatures to me. I mean, a couple of villains did have human qualities, but I cannot say anything more about some others than just that I thought they were horrible. And they still felt human to me, just really horrible human beings if that makes sense.

I thought the female characters were wonderful. Neil’s sister Nora stood out to me – not just because she loved mathematics so much, but also because I thought of her as a really strong character, and she did it without being too modern if that makes sense. It is really hard to explain without spoilers, but let’s just say that Nora did not try to go anywhere without a chaperone or maid when she was staying with her uncle, because it was not appropriate for young ladies of proper station to do so. She did not leave the boring birthday party which her uncle threw for her, but she did some things there that strengthened my opinion of her as somebody who maybe does not have an ambition to rebel against society, but who knows perfectly well what she wants and if she sees the right moment for her, she will seize it. The best moment she seized was closer to the end of the story and I cheered for her. I also loved the maid, Molly, for her stubbornness and desire to fight for what she saw as her goal, and even one of the not so nice female characters made perfect sense to me and I kind of understood her perspective. I also thought that Neil’s one time fiancé who was only mentioned in the story by Neil and who literally had few lines in it at the end stood out for me as a character with great potential.

I am sorry to be so vague about the plot of this story, but you really need to find it out for yourself.

→ Sirius
Previous article: REVIEW: Lost by Laura K. Curtis
Next Post: Thursday News: English accents of the past, Metropolitan Museum photos now online, is YA too dark, and more on trigger warnings