REVIEW: In Want of a Wife by Jo Goodman 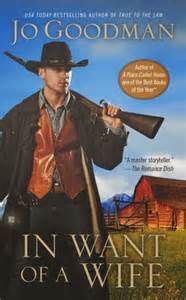 SHE HAS NOWHERE LEFT TO TURN

Jane Middlebourne needs a way out. In 1891, life in New York is unforgiving for a young woman with no prospects, especially when her family wants nothing to do with her. So when Jane discovers an ad for a mail-order bride needed in Bitter Springs, Wyoming, she responds with a hopeful heart.

HE HAS EVERYTHING TO LOSE

Rancher Morgan Longstreet is in want of a wife who will be his partner at Morning Star, someone who will work beside him and stand by him. His first impression of the fair and fragile Jane is that she is not that woman. But when she sets out to prove him wrong, the secrets he cannot share put into jeopardy every happiness they hope to find….

I know I say this a lot but you’re another author I’ve been meaning to try for quite a while. I’d read Jane’s reviews here and think, “Yep, gotta read a Goodman book one day.” Well, one day finally came when we were offered this book to try. It nicely coincided with my decision to read a Western and voila, a review was born.

Since I was a Goodman virgin, I decided not to go back and (re)read any past reviews either here or at other sites in order to approach the book with no preconceptions. I know it’s usual to start out talking about the hero and heroine but I’m just bursting with love for almost all the secondary characters here, especially the two brothers Finn and Rabbit – and with their given names I’d pick nicknames, too. I generally can take or leave child characters but these two jump off the pages and despite the fact that they’re harder to get rid of than a tick, they’re so much fun to read about that I enjoyed every scene they’re in. The fact that they bedevil the villains of the book is an added plus. Keep in mind that this is an eleven year old being held hostage by men with guns saying this.

Finn set his folded hands on the table with great aplomb and regarded the man who was charged with keeping them in the kitchen. “So,” he said gravely, “what sort of name is Dicks anyway? No villain should have a name that sounds like his man parts.”

Ida Mae Sterling is a treat too with the way she manages everyone and everything that comes within sound of her voice. The four ranch hands Morgan employs as well as the sheriff and his wife – do I correctly sense they had a book? – round out the good guys. Even the villains were cold, calculated menace, well that is when the boys weren’t aggravating them.

Now for the main event. “Wife” is told in what seems like two separate parts. It starts with mail order bride Jane arriving in the small Wyoming town of Bitter Springs to an uncertain welcome. The man waiting for her was expecting a much different woman, one he thought would be physically bigger, stronger and thus more suited to western ranch life. Jane immediately impressed me by taking charge of the situation, setting mutually agreeable terms to resolve the misunderstanding, letting Morgan know that she would be an equal party in the decision and telling him she wasn’t going back no matter if they married or not. She soon proves herself, regardless of the misconceptions she’s gained about the west from pulp fiction novels, and shows Morgan and his ranch hands that she’s the equal of anything that comes her way.

Morgan is the very model of the taciturn, quiet western hero. He says what he means, does what he says he will, takes care of his own and doesn’t allow anyone to mess with him. He has a hinted-at past, which is kept brief thus allowing the initial story to focus on his growing relationship with Jane, but has already spoken with the town sheriff and fears nothing. He is thrown a bit by Jane, though but soon comes to appreciate her practical nature, which is so much like his own. The two settle into a relationship of getting to know the other before the physical side of marriage is entered into. Readers looking for hot and steamy will have to wait a spell but once Morgan and Jane decide to share a bed, they scorch the sheets.

Morgan’s past finally catches up with him in the second half of the book. It’s also here where he and Jane confess to each other the dark secrets they’ve not revealed. Jane’s issue is the result of the ruse she used against a despised relative in order to get the money to go west and wasn’t a big surprise. Morgan’s childhood is heartbreaking. It’s here that I had an issue. What he tells Jane seems as if it would have shocked most 19th century, well brought up women but she immediately swings into an almost counselor mode and accepts it with little pearl clutching. Perhaps because they both grew up in dysfunctional families there’s a bond between them.

The tension in the latter part of the story is slowly heightened, the danger grows, the menace increases and I was on the edge of my seat to see how Jane and Morgan would not only survive but triumph over the villains. Suffice it to say it’s done in fine style and was immensely satisfying – especially what Jane does.

I was pleasantly surprised by how much I enjoyed this one. There’s no melodrama, no histrionics, just two evenly matched main characters who have suffered, weren’t looking for a love match but to their astonishment, found one. Jane and Morgan may keep some secrets but if they’re talking, they’re telling the truth. It’s got an almost – and I hesitate to compare it to another author’s characters – “Conagher” feel to it. Will it be for everyone? Maybe not if they want shoot-em-up action straight from the start but if a reader is willing to sit back and enjoy a slowly building relationship that blossoms into deep love, I think they will be rewarded. B