REVIEW: It Happened One Wedding by Julie James 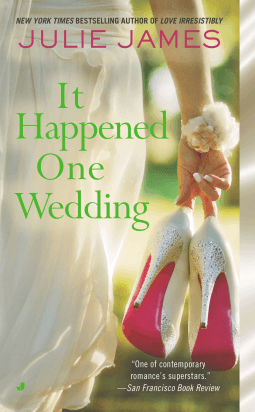 “SHE KNOWS BETTER THAN TO SAY “I DO”

After a humiliating end to her engagement, investment banker Sidney Sinclair is done with commitment-phobic men. But when her sister winds up engaged after a whirlwind courtship, Sidney is thrown into close contact with exactly the kind of sexy playboy she wants to avoid—the gorgeous best man. She’s stuck with him, for better or worse, until her sister walks down the aisle, but that doesn’t mean she has to give in to his smooth advances, no matter how tempting they are…

BUT HE MAKES IT HARD TO SAY “I DON’T”

Special agent Vaughn Roberts always gets his man on the job and his woman in bed. So Sidney’s refusal to fall for his charms only makes him more determined to win over the cool and confident redhead. Only what starts out as a battle of wills ends up as a serious play for her heart. Because the one woman who refuses to be caught may be the only one Vaughn can’t live without…”

This has almost become a Spring ritual. The flowers start blooming, the trees start dumping chartreuse colored pollen on my car and I get to read the next book in your continuing FBI series. I’ll leave you to guess which 2 of those events I actually look forward to.

This book has a great beginning, a pretty good body and a wonderful finish which was more than I was expecting given the wedding theme, which is often a signal that the heroine is going to be embarrassed over the course of the story by well meaning people asking “So when are you getting married?” or she’ll be engaged in some frantic treasure hunt of an effort to snag a date for the big day. But even though Sidney actually is looking for a date for the date, it never felt like a pratfall to me as it was obvious that 1. Sidney’s got agency and 2. Vaughn was going to end up being The One and he was actually helping Sidney with Man-Speak. More on that later.

Sidney and Vaughn initially come together in a definitely not-meet-cute. Vaughn – in his guise of a bad-ass FBI agent who notices all – sees a hot woman on an obvious first date with a guy Vaughn soon pegs as an blowhard idiot. Later, when he tries to move in and ask Sidney out, she busts his balls. Sidney enjoys busting Vaughn’s balls and does so regularly and with great finesse which annoys yet intrigues him.

Sidney and Vaughn part ways thinking never to see each other again but of course we know better. Soon they know better too as they discover they are the siblings of the engaged couple of the title. Isabelle and Simon are just the most darling two people in love, so much so that, as Vaughn says, he almost expects singing birds and happy woodland animals to show up whenever those two are together. The set up that this allows, a wedding planner pressure cooker of three months, thus throws the best man and the maid of honor together all the time. Whenever anyone mistakes Sidney and Vaughn for a couple, the two recoil in horror and send out “wave off, wave off!!” signals. Since neither is looking to hook up with the other, they’re free to get to know each other in a way they never would have otherwise.

As they continue to talk along the way to helping get the whirlwind wedding off the ground, they don’t even realize that they’re beginning to share what’s most important to them such as Vaughn’s difficult early FBI assignments and the fact that doing those investigations was more professionally satisfying to him or Sidney revealing all the messy details on her father’s marital issues. And then Vaughn’ll do something nice like ask Sidney to tell him about her mother and what traits Sidney inherited from her. Plus he’s always available to interpret the texts and emails Sidney gets as she dates her way through Chicago’s single men. I enjoyed Sidney’s Man-Speak interrogations of Vaughn as he cracks the code men use to play women. His eye usually twitches when he does. I love that Sidney catches his giveaway mannerism fairly quickly and teases him about it all book long.

Yet still these two insist they’re not in love, no siree bob, not us, no way. Everyone around them senses something but Vaughn still swears that he’s not interested in giving up his fun bachelor lifestyle and Sidney won’t consider him since he fails her 34 Rules for knowing if a guy is worth bothering about for a long term relationship. Since I’m having so much fun watching them together I didn’t mind it taking them a while before the penny dropped and each realized that the other is the person they want to see after a sucky day at work, or just anytime for that matter. Not only did I like listening to their conversations but I loved watching them actually change and grow to be the people who are ready when Vaughn starts to talk about forever. B+

“So, I have a question.” She looked Vaughn right in the

eyes, for once not trying to hide her vulnerability. “What does

it mean when a guy who has spent years avoiding commitment

says he’s suddenly changed his mind? Is it a fluke thing he’s

going to regret in a couple of months, or is it the real deal?”

His hand caressed her cheek, his voice husky with emo-

tion. “It means he’s found the one woman who makes him

want to be a happily- ever- after type. So bring on the damn