REVIEW: All He Ever Needed by Shannon Stacey

Your contemporary romances have become part of my “can’t wait to read” and my “don’t talk to me, I’m reading” lists.  The story follows the eldest Kowalski brother Mitch, a demolitions expert, who returns to his hometown to help his youngest brother Joe out with the family lodge after Joe breaks his leg. He plans to be home for six weeks which is about all he can handle of Whitford, Maine where everyone remembers every one of his youthful peccadillos and can’t stop repeating them ad nauseum.  Yes, Mitch agrees he was a bit of a reckless youth with a tendency to amuse himself with the girls, but that was years ago and he doesn’t understand why he’s being constantly measured against his teenage self. 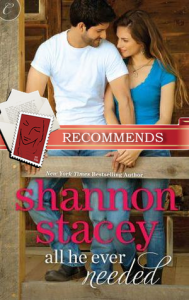 Paige Sullivan is the owner of one of the town’s restaurants. Her car broke down in town and two years later, she calls Whitford home. I loved the contrast between Mitch’s sour outlook on small towns and Paige’s embrace of it. Mitch has had too much of small town closeness and for a girl who hasn’t had many connections in her life, Paige is thrilled to be enfolded in the town’s warm embrace. She loves her newly placed roots and Mitch loves the freedom of living from city to city and project to project.

There were things that did not work for me. I’ve become decreasingly enamored with the guy who pursues a chick for temporary fun and games when the the “hero” believes that the heroine is not the type of girl who is into sex only romps.  This is not to say that women can’t enjoy sex for the sake of sex and that isn’t a perfectly valid characterization for a romance heroine.  And it’s not to say that Paige, in this book, couldn’t be that type of heroine. In fact, she does agree to have a temporary affair.   But when the hero, Mitch, believes that she is not the type to want only a temporary sexual connection and still pursues her, what does it say about him?  It validates every criticism that the town levies against him – that he is a womanizer in search of his own pleasure.  Mitch is unrelenting in his pursuit even after Paige brushes him off, telling him that she is not interested. Mitch promises Paige a good time and that he’ll not hurt her.  I think it’s a bit arrogant and selfish and myopic. How does he know that he’s never hurt anyone after they’ve had their fun?

It really got my back up when Mitch felt that he could invade Paige’s space, both metaphorically and physically, yet was irritated when Paige even approached his own self-designated-but-not-outwardly-communicated-to-Paige space. I wished Paige had asserted more limits with Mitch. Their physical relationship felt awfully one sided and Mitch sent out any number of mixed signals. It would have been nice if Paige had called him on that.

That said, Paige’s reluctance to be temporarily involved with Mitch was understandably worn down by him and his rumored expertise in the bed, which she found out were all true.  And both parties find their feelings engaged, against their will.

My issues with Mitch were why I graded the book down one star.  Everything else in the book worked for me, including the deftly done set ups for the  other brothers’ books.  I feel safe that every time I pick up a Stacey book I’m going to read something funny, sexy, and loving. That’s exactly what I got in All He Ever Needed. B