REVIEW: A Bad Day for Voodoo by Jeff Strand

“When your best friend is just a tiny bit psychotic, you should never actually believe him when he says “Trust me, this is gonna be awesome.”

Of course, you probably wouldn’t believe a voodoo doll could work either. Or that it could cause someone’s leg to blow clean off with a quick prick. But I’ve seen it. It can happen.

And when there’s suddenly a doll of YOU floating around out there–a doll that could be snatched by a Rottweiler and torn to shreds, or a gang of thugs ready to torch it, or any random family of cannibals–well, you know that’s just gonna be a really bad day…”

I love the dedication of your book “to everybody who’s kind of weird.” I love the high school/er feel and the “teachers are out to get us” ethos. It started a little slowly, took some time to build up to cruising speed but once this baby got going, it was like a roller coaster that shooshes down and then turns you upside down and inside out and shakes you around until you’re seeing triple and thinking your intestines are headed for the next county. Or an older Caddie doing 80 mph – impossible to stop, relentless in moving forward, and cornering on two wheels. 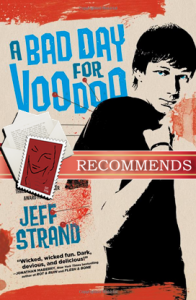 Hmmm, that’s still not quite it. I’ve got it! It’s really like an out of control carny ride. One of those spinning ones that goes faster and faster and spins around and around in a whirling vortex of insanity and you wonder if you’re going to see a repeat of that cotton candy you ate before getting on – no wait that part came when Mr. Click turned into a zombie and later when he tackled the chop shop thug. That was nasty. And poor Kelley getting to be up close and personal with it for so long after she got shot. Bleurgh.

I’m not sure which – ever escalating – part had me laughing the most. They were all so inventive and just when I thought, “it can’t possibly get any weirder” you’d top it with the next sequence and make it even crazier. The first voodoo doll, Mr. Click’s leg, the second voodoo doll, the carjacking, the chop shop, the gun fight, the dog, the dog with the doll, the dolljacking, the search for a phone, the weirdly smiling family, the payoff, the chase scene, the two voodoo priestesses, getting what’s needed from where it is to the voodoo priestesses to end the power and then your editor’s OMG reaction to the missing chapter. Chapter 28 was great because I too was wondering how you’d get the doll, Adam, Tyler, and poor Mr. Click away from Tyler’s parents, the cops, the cop car and to the voodoo shop before Tyler began roasting in hell. Sounds like it would have been a hell of a read (pardon the pun) but Tyler’s editor’s recount is a close second.

Tyler’s first person POV is funny, concise and trustworthy. If he tells me something, I’m inclined to believe him – with the obvious teen hyperbole. And the brief times that you need to include information that Tyler wouldn’t have known, it’s prefaced with information about how he (could) easily discover it. I so don’t like 1st person PsOV that include a lot of “later I discovered that” awkward tack-ons. They just never flow for me. The main place where we don’t have Tyler’s actual POV is the (still) hilarious (missing) chapter 28.

It’s truly funny. I can just see you cackling with glee as each chapter tops the previous one in the Holy S–t – word quotient. I liked the characters – even taxi driver Zeke when he was initially in for the fun of chasing the carjacker but – wow, I didn’t expect what was going to happen to Mr. Click or Tyler and I hoped against hope about how the ending would occur. I totally agree with Tyler, Adam and Kelley’s decision to tell the truth vs trying to make up something to explain it all. ‘Cause who on earth is gonna believe all that? No one, which would keep their parents and the cops from picking apart any made up version of the events.

Tyler learns that Adam might be a little strange but he’s a true friend. Ditto Kelley being a fantastic girlfriend – they might even last past the “sell by” date that Tyler envisioned when she would break up with him on their way to different colleges. These two are the best – the type who really will hide a zombie body for you.

I had a fun time reading about the weird and wild night that Tyler, Adam and Kelley endure. It’s not entirely new since zombies seem to be the new vampires, it’s not rocket science – God help the world if Adam gets his hands on a rocket – but it’s delicious fun. I didn’t turn off my ereader thinking, “that was a total waste of my time” which is always a good thing. It also earns the accolade “I could see this almost as if it were a film, and what a film it’d make.” B+