REVIEW: All He Ever Desired by Shannon Stacey

I’m not one who really loves big family stories but you make the Kowalski clan so appealing that even I, the curmudgeon, look forward to spending a few hours with them. This story features Ryan Kowalksi, an owner of a custom home building business in Massachusetts. He is spending a month in Maine helping to fix up the family lodge and get it ready for sledding season and his eldest brother’s wedding. 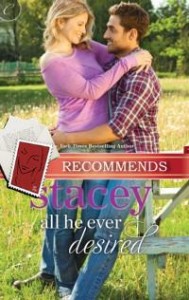 Back in Maine Ryan is confronted by the uncomfortable fact that at the age of 36 he wishes he was married with children. The one girl he ever loved married his best friend. He begged her to leave with him back when they were high school seniors but she refused. Over time, Ryan has been married, divorced, and built a great business but there is something missing in his lie.

Lauren Carpenter loved her high school sweetheart, Dean, and when she got pregnant they agreed to marry each other. Having a baby shot both their dreams of college and a different life which eroded whatever feelings they had for each other. The only thing that ties them together is their 15 year old son.

When Ryan sees Lauren again, his old feelings are stirred up. When her son is caught engaging in delinquent acts at the Kowalski family lodge, Ryan sets him to work as part of his penance. This brings Lauren back into constant contact with Ryan. As Lauren and Ryan get closer, their connection is strained by Ryan’s distance, their geographical differences, and Lauren’s position as a mother. Her entire family is in Whitford, Maine, and all of her friends are there. Whatever she and Ryan may have doesn’t seem to be worth throwing that all away. The son comes off as genuine as well, moody but loving.

The book surprised me, pleasantly in many ways. Instead of taking the well worn path of the romances of old, you manage to infuse a freshness into a common trope – friends to lovers. Lauren truly did love her husband and she didn’t leave him even when Ryan asked because she loved him. Overtime, the love relationship died off. It makes sense that Lauren is afraid of leaving her family and friends at this stage in her life even when her feelings for Ryan grow, partly because she doesn’t know where she stands. They are both afraid of exposing their vulnerabilities to the other, Ryan in particular because his past attempt at the big gesture was met with a resounding no.

The story was humorous and sexy. The soiling discussion had me howling.

He crossed his arms and gave Ryan a flat stare. “You can call me Mr. Dozynski, I think.”

“What?” Ryan had never heard anybody call him that. Ever. He’d been Dozer since he’d moved to Whitford and bought the hardware store in the seventies. “What did I do?”

“You molest my daughter and then come in here and think I’ll sell you flashing?”

“Whoa!” Ryan held up his hands. “Your daughter’s thirty-four years old. Nobody molested anybody.”

Dozer looked at Josh. “Is that not the word I wanted?”

Josh shook his head. Albert Dozynski had grown up speaking Polish at home and English at school and still had some trouble with the more outside-the-classroom words. “People use it joking around, but it’s not cool if you’re throwing out serious accusations.”

“You soiled my daughter,” Dozer threw at Ryan.

He glared at his brother. “You asshole.”

“Look, I didn’t soil Lauren, okay? I spent the night with her, yes. And I’m taking her to dinner tomorrow.”

I loved the interaction between Lauren and her best friend Hailey. Lauren is upset with Ryan, a bit irrationally, and she wants Hailey to back her up. After telling Lauren she doesn’t think that Ryan is doing anything wrong, Hailey dutifully refers to Ryan as “that jerk” for the rest of the night because she is a true friend. Everything in the book came off genuine and real. Can’t wait for the next Kowalski. I hope that there are more cousins we don’t know about because the end is in sight and that makes me sad. B

P.S. I tweeted that I needed a family tree and this is what Stacey tweeted back: 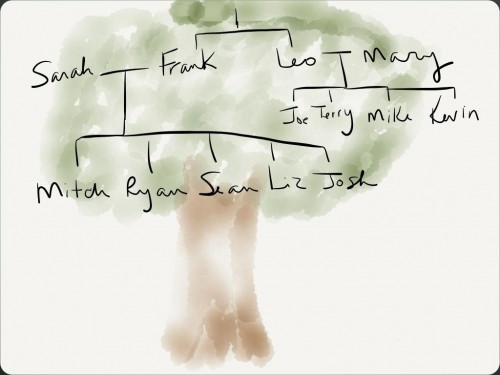