REVIEW: The Fault in Our Stars by John Green

The narrator of your novel, The Fault in Our Stars is Hazel, a sixteen year old with stage four thyroid cancer “with an impressive and long-settled satellite colony” in her lungs. Thanks to a drug treatment she calls “the Miracle” Hazel’s cancer has been kept from spreading further. When she leaves the house, Hazel has to wheel a cart bearing an oxygen tank attached to a cannula, a tube that delivers oxygen to her nose. 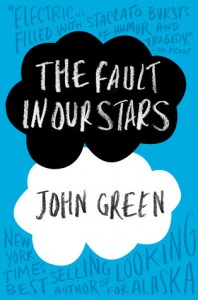 Hazel doesn’t leave the house much, though. Instead she spends a lot of time in bed, and ponders death, so her mother decides she’s depressed. Hazel doesn’t really disagree (“Depression is a side effect of dying,” she states) but she doesn’t particularly want to do anything about it, especially not the thing her mother wants her to do – attend a support group for teens with cancer. Here’s Hazel’s irreverent description of the support group:

This Support Group featured a rotating cast of characters in various states of tumor-driven unwellness. Why did the cast rotate? A side effect of dying.

The Support Group, of course, was depressing as hell. It met every Wednesday in the basement of a stone-walled Episcopal church shaped like a cross. We all sat in a circle right in the middle of the cross, where the two boards would have met, where the heart of Jesus would have been.

I noticed his because Patrick, the Support Group Leader and the only person over eighteen in the room, talked about the heart of Jesus every freaking meeting, all about how we, as young cancer survivors, were sitting right in Christ’s very sacred heart and whatever.

So here’s how it went in God’s heart: The six or seven or ten of us walked/wheeled in, grazed at a decrepit selection of cookies and lemonade, sat down in the Circle of Trust, and listened to Patrick recount for the thousandth time his depressingly miserable life story—how he had cancer in his balls and they thought he was going to die but he didn’t die and now here he is, a full-grown adult in a church basement in the 137th nicest city in America, divorced, addicted to video games, mostly friendless, eking out a meager living by exploiting his cancertastic past, slowly working his way toward a master’s degree that will not improve his career prospects, waiting, as we all do, for the sword of Damocles to give him the relief that he escaped lo those many years ago when cancer took both his nuts but spared what only the most generous soul would call his life.

So Hazel doesn’t want to go, but her mother insists. Hazel caves “for the same reason that I’d once allowed nurses with a mere eighteen months of graduate education to poison me with exotically named chemicals: I wanted to make my parents happy. There is only one thing in this world shittier than biting it from cancer when you’re sixteen, and that’s having a kid who bites it from cancer.”

Hazel has one friend in support group, Isaac, who lost an eye to cancer. Isaac brings a friend to support group with him, Augustus Waters. Augustus has a prosthetic leg, also thanks to cancer — in his case, osteosarcoma. But he has been cancer free for years, and he comes to support group mostly to give Isaac company.

Augustus is hot-looking and he cannot take his eyes off of Hazel. He and Hazel are both witty and clever, as well as quirky, so they quickly connect.

Augustus invites Hazel to his house to watch “V for Vendetta,” and soon the two them exchange their favorite books. Hazel’s favorite book in the world is An Imperial Affliction, a book about a teen with cancer, but one which eludes all the usual cancer novel clichés. She has read the book countless times and is a bit nervous about sharing it with Augustus, but he gets the book in the same way she does.

And then Augustus does something magical: he manages to get in touch with the book’s reclusive author. An Imperial Affliction, which is written in a journal format, ends in mid-sentence, indicating the narrator has died. But other threads of the story are left untied, and Hazel desperately wants to know what happened to the heroine’s mother after the heroine’s death.

Peter Van Houten, the author of An Imperial Affliction, finally agrees to tell Hazel what happens, but only if she can come to Amsterdam, where he resides. Hazel asks her mother if they can go there, but due to expensive cancer treatments, her parents cannot finance a trip to Amsterdam. The following conversation then takes place between Hazel and Augustus:

I told Mom I wanted to call Augustus to get her out of the room, because I couldn’t handle her I-can’t-make my-daughter’s-dreams-come-true sad face.

Augustus Waters-style, I read him the letter in lieu of saying hello.

“Do you have a Wish?” he asked, referring to this organization, The Genie Foundation, which is in the business of granting sick kids one wish.

I sighed loudly. “I was thirteen,” I said.

“You did not go to Disney World.”

“Hazel GRACE!” he shouted. “You did not use your one dying Wish to go to Disney World with your parents.”

“Oh, my God,” Augustus said. “I can’t believe I have a crush on a girl with such cliché wishes.”

As it turns out, Augustus saved this wish “to preserve the integrity of the Wish as an idea.” Now he has at last found something he wants to spend his wish on, and that is going to Amsterdam with Hazel.

Hazel is thrilled, but then she reads the Facebook page of Augustus’s previous girlfriend, Caroline, a girl he met at the hospital who died of cancer. A post written by a friend of Caroline’s shortly after her death contains a sentence which devastates Hazel : “It feels like we were all wounded in your battle, Caroline.”

Things come to a head when Hazel ends up in the hospital because her lungs need draining (a side effect of the miracle drug). Life is short, and Hazel doesn’t want to spend it all at home when she has the opportunity to go to Amsterdam and meet the author of her favorite book in the world. But if she goes, can she keep Augustus from loving her? And can she keep from loving him back?

I’ve quoted a lot from The Fault in Our Stars in this review, because I liked the witty narration so much and wanted others to get a feel for it, and for Hazel’s character. Augustus is equally appealing, clever and funny. For me this was (obviously) a strength of the novel, but also (perhaps less obviously) a weakness, because there were times when Hazel and Augustus sounded smarter and more erudite than any sixteen year old I’ve ever met.

Not only that but even the side characters sometimes shared this preternatural cleverness. As much as I liked Hazel and Augustus, and found them charismatic, I also felt I could see the author’s hand behind these characters, and others in the novel. There was an artifice to this work, with its self-conscious ironies and its meta references to cancer books, as well as its novel-within-a-novel.

My husband, who read the book with me, pointed out that it was almost constantly awash in metaphorically significant actions and words, and went so far as to use the word “pretentious,” even though he ended up liking the book quite a bit. Personally I don’t feel it’s pretentious, just that there is a visible artifice to it.

I too ended up liking this book, despite its flaws. The title of the novel, The Fault in Our Stars, comes from a passage in a letter Peter Van Houten writes to Augustus while Hazel is in the hospital.

Everyone in this tale had a rock-solid hamartia: hers, that she is so sick; yours, that you are so well. Were she better or you sicker, then the stars would not be so terribly crossed, but it is the nature of stars to cross, and never was Shakespeare more wrong than when he had Cassius note, “The fault, dear Brutus, is not in our stars/ but in ourselves.” Easy enough to say when you’re a Roman nobleman (or Shakespeare!), but there is no shortage of fault to be found amid our stars.

Despite its humor and irreverence, The Fault in Our Stars is ultimately a tale of star-crossed lovers. Although it points out the path taken by “cancer books” and attempts at times to get to the same place by circuitous roads, it does eventually, reach the same place, and unlike An Imperial Affliction, it does not avoid each and every predictable cancer novel turn. It is as much a tearjerker in the end.

Still, I do not always mind a good cry. For its witty narration, its lovable hero and heroine, its sweetness and its unflinching look at mortality, The Fault in Our Stars earns a B from me.