“The dead don’t speak, but Kelsey Quinn knows their secrets. As a forensic anthropologist at the Delphi Center crime lab, Kelsey makes it her mission to identify bodies, often using no more than shards of bone. Her find at a remote Philippines dig hints at a sinister story. When Kelsey’s search for answers puts her at the scene of her ex-fiancé’s murder, only one man can help her–the man who broke her heart months before and is also a prime suspect.

Faced with an ultimatum—Kelsey or his job—Gage Brewer did the only thing a Navy SEAL could . . . but that doesn’t mean he stopped wanting Kelsey. Now Kelsey is running for her life and Gage is her last line of defense.”

My reaction to the last book “Twisted” had me worried and frankly I was holding my breath with this one. I did end up with a few tiny issues but overall this one is back to what I hope for in a Laura Griffin romantic suspense book. 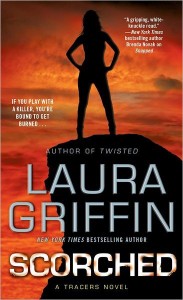 The plots of these books always sound plausible. I might have issues with the way some of the characters act and react but as far as the driving force behind what gets the action going, I don’t have to suspend belief and just go with it. And the plots are scary as hell – usually. The break from a serial killer villain is appreciated. Now we’re on to mass murder. Is this worse – more victims in total, or better in that I’m not worried throughout the story for individuals who might fit the profile? I’m conflicted on that but the evil level is still maintained throughout.

What happens is a clever mix of real events and dreaded scenarios. I hate to use the hackneyed phrase “torn from the headlines of a newspaper” but, honestly, the plot could be. Thanks for keeping it real.

Isn’t it nice for the unsuspecting American populace that trained SEALs are there who are cool as ice under pressure? And have had their anthrax vaccines? Hmmm, I’m not sure about that phrase “Froggie sense” that Gage’s teammates use to describe his sixth sense of danger since for me it conjures visions that are more cute than that of finely honed warrior instincts. Thank God the description of the SEALs here is not quite to the worship stage of other authors but still enough to get a good feeling that these men can handle whatever is thrown at them and are not going to back down. More “cool, man” than “OMG, I’m so in awe!” of them.

I love the details of Kelsey and later Gage doing what they do best. Even if they’re sort of grim details it gives the characters authenticity and veracity to their speculations later on. But how does Kelsey think she’s going to be able to waltz into the Delphi center – with all its id checks – and not realize the FBI will catch on to the fact that she’s there?

The tension is built up, then lowered down a touch, then built a bit higher, then relaxed a little then slowly raised to bursting point. It’s not like a roller coaster but more in gentle inclines but the payoff is still boss. I have a niggle though, at the out that Kelsey offers to the SEALs at the end. Really, she thinks they might say “nah, we think we’re done here. You take it from now on” and give up at the last minute? And what does she know about what needs to be done? She loves her man and wants to help but, jeez! Jane and I chatted a bit about this issue and she, rightly, pointed out that Kelsey has a scientifically trained mind and isn’t one to get all squirrely under pressure.

Love the way one final person gets caught. Fucking genius. At times I might wonder about the intelligence of the FBI but here it’s abso-fucking-lutely great. Big smile time.

Initially as I read it, I thought the love story didn’t work as well for me as the suspense. Then I thought back and realized it does work. There are fabulous reasons that Gage and Kelsey initially broke up – and they match what I’ve heard are the standard issues for the rockiness of SEAL marriages. Plus there’s the geography of Gage stuck in either of two US locations where SEALs are stationed and Kelsey in mid country in a dream job. It would be next to impossible for either to just pick up and find a similar job in closer proximity to each other. Plus Gage’s initial concentration on sex with Kelsey with no expectation of it being more for them kinda sucks. Sure, as a relief valve for the pressure they’ve been under, I can see but Kelsey is aware that Gage isn’t thinking long term commitment. As I’m reading this, I’m thinking that these two a polar lengths apart and how could they ever work through these issues. It’s only after the fact that it becomes clear that the whole book is set up to allow this.

Gage and Kelsey both knew how important each others’ jobs are but here they get to see the other in action and it finally becomes crystal clear how damned good each is at what he/she does and how important these jobs are. As Kelsey becomes a target, Gage finally realizes what she went through worrying about him when he was in combat. It’s the proverbial “Ahhh haa, the light dawns” moment. And right when Kelsey tells him what she wants in the future, and that she now knows she won’t get it from him because she can see what being a SEAL is really all about, he begins to shift to knowing that he wants to be the man in her future. The transition works for me. Instead of a book where I can’t buy into the change of heart needed to bring two people together who’ve been written so far apart, here I can see it happen.

The time added on to the end of the story helps and the fact that both of them are willing to give in order to make this work is a fantastic beginning to the next stage of their relationship.  B