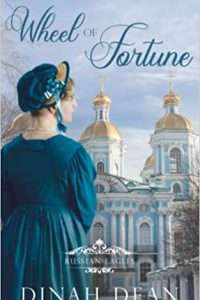 An heiress discovering an overwhelming world of aristocracy and manners.
Unexpectedly inheriting her Godfather’s estate—including a house stuffed with loot and a frightful taxidermy bear—Galina sets about building a new life. Luckily, she is befriended by the Orlovs and introduced to the glittering St Petersburg high-society.

Soon Galina has an excess of suitors, but she can’t help but compare all of them to the man who ought to have received her inheritance, had he not died in a shipwreck. The portrait of handsome and honorable Gennadi draws her eye and occupies her thoughts. Her mother says the tarot cards don’t associate death with Gennadi. But tarot is just nonsense… Isn’t it?

The story of a young woman finding her way in the strange and thrilling high-society world of aristocratic Russia during the Napoleonic wars. This book will delight those looking for authentic historical detail of a young Christian woman embracing her fate and fortune.

Okay, let’s get this out of the way. All together now!

This is part of Dean’s “Russian” series and is set in 1813/14. After finding a chart that has the chronological dates of the action in the books, I decided to read them in that order rather than use the #2, etc designations or go by the order in which Dean actually wrote them. Luckily for me, I’d started off correctly!

Picking up after the action in “The Eagle’s Fate,” we find ourselves in St. Petersburg with young (but presumably of age) Countess Galina Stepanovna Razumova. Galina never expected to inherit not only fabulous wealth but thousands of “souls.” As she did expect to inherit her father’s small estate in Tver, she has studied estate management but the inheritance of her godfather’s properties is one she looks upon as almost more of a burden. The grand mansion in St. Petersburg is crammed to the rafters with the loot and detritus that her godfather (whom men in the Army nicknamed “Yuri Stickyfingers”) scooped up from here, there, and everywhere during the years of the wars in Europe.

News of her inheritance has stoked frenzied interest in her but luckily for Galina, the first person to arrive and meet her is Countess Tatyana Petrovna Kalinskaya (sister of the hero of “Flight from the Eagle”). Tatya knows everyone you want to know and is kindness personified. Soon Galina has been taken under Tatya’s social wing and is meeting most everyone from “Flight” and “The Eagle’s Fate.”

Shortly into the book, just when Galina is feeling a bit overwhelmed trying to remember who’s who, Tatya gives her a precis of who’s who so don’t worry if you haven’t read the first two books. You really can start here.

As Galina begins to fit into Petersburg society and meet several suitable men who appear to show an interest in her (she is attractive and wealthy as all get out), she starts to discover more about the kind of man her godfather was (beyond how he pinched everything he could lay his hands on) by how he treated his “souls” or serfs and how predatory his business interests could be. Slowly, Galina changes the way things have been done in this household (to the frank amazement of her major domo whose appreciation of his new mistress is both touching and heartbreaking. The way the serfs feel is shown in how the household begins to address Galina). As Osya Ivanich stammers out his thanks for the household, Galina is embarrassed to be thanked for merely being a decent human being.

The social whirl is exhausting, the wealth of the 1% (if you were among the 1% then, life was pretty good with balls, dresses, carriages, and sled racing parties during the winter) is gobsmacking, and Dinah Dean takes several opportunities to show (via the things Galina’s household is used to enduring and [even worse] expects) the horrific conditions under which serfs and the wretched poor existed. As in “Flight,” there is some discussion about the fact that serfs could be freed at this point. Galina’s concern for those she’s inherited drives her actions both as she discovers how they’ve had to live at the house she now owns in St. Petersburg and later, when things began to be changed. Her business and estate management acumen also startles and impresses several men over the course of the story.

But what about the romance this time around? Well. It’s complicated. To be honest, this book is more historical fiction than historical romance although there is a romance. As I flipped pages and the story progressed, I wondered with whom Galina would be paired. Really there was just one choice but the vibes had me puzzled. Or was that how it was supposed to be? Close examination of the blurb ought to answer that question but I’ll try not to give anything away. I will say that you kind of just have to go with how Dinah Dean sets up the romance finale. On the way there though, we see Galina get two proposals – one hilarious, one awful –  plus a non-proposal during which the man explains why he won’t ask her to marry him and also watch a friend of hers stick up for her.

There’s kind of a “found family” feel about the friends which I enjoyed very much. Oh, and they’re spoiled for choices of Cathedrals in St. Petersburg and Kyiv in which to worship. I had a great time looking some up and marveling at the images. Dean effortlessly incorporated her extensive knowledge of historic Russia including a road trip (in winter, in carriages on sleds!) from St. Petersburg to Kyiv, a court presentation, the Winter Ball in the Winter Palace, and how to manage a racing sled plus all the conditions of the serfs. Don’t go into this one for the romance but do go for the history and the friendships. B+

→ Jayne
Previous article: REVIEW: Pink Flamingos and the Yellow Pages: The Surprising Stories behind the Colors of Our World by Bob Hambly
Next Post: CONVERSATION: Marriage of Convenience Recommendations