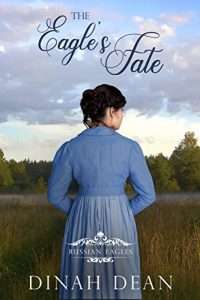 Captain Valyev had been kindness itself when he stopped on the road to give assistance to Nadya, one of a vast crowd of refugees fleeing before Napoleon’s advancing army. But the moment she told him her full name, his attitude had changed to chill hostility.

Why did he seem to dislike her so?

Gradually she understood that his behavior had something to do with her deceased brother, whom she had barely known. But what did the captain’s feelings matter, she thought. She could tolerate his rudeness, his disdain. She wanted only to be delivered safely to her destination.

Yet it wasn’t long before she realized, to her consternation, that this wasn’t enough!

This is the second book in Dean’s Russian series and is just as good as the first (Flight from the Eagle) . It picks up a little after that book and carries the story on though it is not necessary to have read FFTE first as this one stands on its own.

Napoleon’s Grand Armée is about to descend on Moscow and Nadezhda Igorovna Serova, along with just about everyone else there, is fleeing the city in a panic. Years ago, her family lost all their money and she’s come down sadly in the world along with being on her own since the death of her brother at Austerlitz and her father not long after. Having no horse or, any longer, a servant with her, she begins the flight to where she hopes to find sanctuary with an old school friend, Tatya Petrovna, Countess Kalinskaya who is the sister of the hero of FFTE, Lev Petrovitch Orlov.

Along the way, she’s accosted by a thief and saved by the arrival of a troop of Life Guard Hussars, one of whom becomes distinctly hostile towards her once her name is revealed. Knowing that they can’t abandon her on the road, the men take her with them for a ways before splitting off towards their destination, leaving Captain Andrei Ivanovitch Valyev, the man who hates her for some reason, to finish the job of delivering her to Tatya, who is also a friend of his. Once there, he makes it very clear that he wants nothing better than to leave her and never see her again.

Therefore, Nadya is surprised to receive a letter from him some two months later in which he apologizes for being so rude for a reason he now believes her in ignorance of, asks her forgiveness and mentions a slight problem with his hands that he sustained in battle. Nadya writes back that she forgives him then prepares to go with Tatya and Irina, the heroine of FFTE and Tatya’s future sister in law, to St Petersburg where some time later, Andrei arrives and they learn the true extent of his wounds. He’s lost most of one hand and many of the fingers of his other and will be leaving the Army. From this point on, we get to watch as Nadya battles her growing attraction to this mentally and physically wounded man who she believes loves her friend Tatya. And watch as he begins to see that Nadya might just be the love of his life. I finished this one off in one straight reading and now am thoroughly hooked on this series. Dean knows her Russia and Russian history, especially that of the upheaval of the war with France. She presents some complex battles and Army information in a tight, succinct manner that conveys it without it being a history lesson. One interesting thing I learned was about the serfs who lived on the roof of the winter palace. This is one book that you know is set in Russia.

Nadya is a heroine I love. Calm and practical and a true woman of her time. She’s intelligent and kind and not at all overly feisty. Her efforts to show Andrei that not all women will scorn him for his scars is touching but without pity. Andrei has to learn that his life didn’t end when most of his fingers were amputated. His struggles to learn how to cope seemed realistic and show what so many veterans must go through. His reason for his initial antipathy, once revealed, seems plausible. The actions and reactions of the major characters remain true to their time and we get a glimpse of the horrors endured by both the Russian and French armies through the stories told by Lev once he arrives back from the front. Along with getting a conclusion to his love story with Irina as they plan their wedding.

I do have a few teensy quibbles. The story is told entirely from Nadya’s POV and there is a little plot twist regarding Irina that arrives from nowhere for no purpose that I could see. Andrei is absent from much of the story for the first few chapters though he is in all of the rest of the book. Still this one is a strong A- for me because of Dean’s usual great writing, her wry touches of humor and the joy of seeing Andrei and Nadya fall in love (his proposal scene is great and makes use of the meaning of Nadya’s full name).

→ Jayne
Previous article: REVIEW: Eclipse the Moon by Jessie Mihalik
Next Post: REVIEW: A Prayer for the Crown-Shy by Becky Chambers