Jane brought it to my attention that “Warprize,” your first novel and the first book in this series, is being reissued this month just as a book which is (I think) loosely related to it is being published. She asked if I’d be willing to revisit “Warprize” and I agreed. 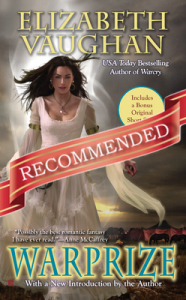 Princess Xylara (Lara) of the land of Xy is a healer despite her royal status. She and her half brother have never truly gotten along and her decision to pursue this has been a source of friction between them. But worse things are afoot as the country has been invaded by a fierce horseback warrior tribe who are called the People of the Plains. As Lara aids the wounded of her own country and the prisoners of war captured during the fighting, it becomes more obvious by the day that the older and weaker civilization of Xy can’t hope to hold out much longer.

When the inevitable occurs, Lara braces herself for the terms of their defeat but nothing could have prepared her for the news her half brother announces – namely that she will be given over to the leader of the People as a Warprize. Horrified, Lara imagines a future of degradation at worst and being a slave at best. But as the terms were presented to her, she has little choice if the people whom her royal family has governed for generations are to escape destruction.

Lara is handed over to Keir and his people and thus begins her new life. She starts to learn about the People and finds herself treated remarkably well for a prisoner but she can’t get a grasp on her status to them or to Keir. They seem friendly enough yet are still strange and strangers to her. What will her future hold with them and can she believe the desire in Keir’s eyes is honorable or not?

Since the book is now over five years old, I would imagine that many people have read it and know the Big Reveal which is saved for the last quarter of the story. I would hope those who haven’t read it or read much about it would refrain from peeking or reading too many discussions about it since the bomb you drop is a big one and knowing about it would, IMO, spoil the book.

Since it’s told in first person POV, the reader only knows what Lara knows and what she knows – or doesn’t know – is only slowly filled in along the way. And since I didn’t know what I didn’t know, it didn’t bother me. If that makes sense. And it’s not a question of either lead character not wanting to believe or being unwilling to believe the other, it’s just that each *thinks* the other understands certain situations. As one character says to Lara (paraphrased) , “you picked up our language so quickly that we assumed you knew.” Since the situation was presented this way, it didn’t annoy me as some Big Misunderstandings do.

But I didn’t mind being as ignorant as Lara for most of the book. While the worldbuilding is probably not top notch as compared to many fantasy novels, it works for me and I found myself fascinated by the People and their culture. They drew me in and kept me turning
pages. The people of Xy are less interesting and come across as general run of the mill fantasy medieval folk.

I do have a few problems with Lara but not with her selfless devotion as a healer. It is presented as a calling for her and one in which she was taught her duty to the wounded and sick. She’s also a royal princess and as such has also brought up with a sense of duty to her family and people. There is a scene during her preparation to be handed over as a warprize that made me sniffle a little and truly shows that she isn’t just some selfless martyr. What ticked me off a little is an end scene when she still won’t acknowledge the wickedness of the villain and keeps fighting to protect him. She’s had proof (lots of
it) and knows this person hates her but still she keeps urging others not to take revenge on him. In my opinion, he needed to be knocked around a little.

The People of the Plains (or Firelanders as Lara’s people call them) are seen totally through her eyes. And we only know what she knows or has been taught. That they are barbarian raiders who have come to pillage and destroy. But, it is apparent fairly early that Lara will be treated well so I was a little puzzled that she didn’t seek an earlier understanding of her future since the People were all more than willing to explain things to her when she did ask. Much to my relief, this is definitely not a “keep her chained at his feet” kind of captive/captor story.

Looking back at my notes from when I originally read “Warprize,” I notice that I finished the book still wanting to know more about the People of the Plains, of Lara’s future with them and of her future with Keir. Some of the questions were answered in the next two books which Jane and I have variously reviewed at Dear Author. Though I haven’t had time to reread “Warprize” in anticipation of “Warcry” I do have fond memories of it and am looking forward to reading more about the People in your new book. B+

→ Jayne
Previous article: Monday Midday Links: Unscientic conclusions put forth as real science (what else is new)
Next Post: REVIEW: Sabine and the Beast by Moira Rogers