Years ago I read one of your other novellas set during WWII and liked it enough that your name stuck in my mind. When Liquid Silver offered us the chance to review “A Discreet Affair” I was all ready to go. 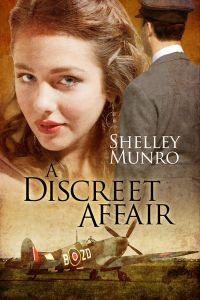 Widow Pamela Allison has avoided her cousin’s and aunt’s attempts to match make since she took the job in her aunt’s shop near the RAF airbase at Biggin Hill. Partly to escape her overbearing mother and partly to escape her memories of her dead husband’s jealousy and brutality, Pamela sough refuge here and is happy without a man, thank you. But finally tired of their ceaseless efforts, she decides to give in and go out one time.

It’s then that she meets Spitfire pilot Michael Stedman. Michael isn’t looking for anything long or lasting either given the expected lifespan of an RAF pilot but the two hit it off and start what each initially wants: a discreet affair. But the nosy busybodies of the small town are constantly on alert for any gossip and soon rumors begin to circulate about the two. Will they admit what they feel for each other before Pamela’s reputation is shredded? Or will Pamela’s past and Michael’s uncertain future doom them?

The story has a good period feel without going overboard cramming in all sorts of useless trivia data that adds little to the story. There’s enough for window decorations but since this is a novella, I can see that you didn’t want to take up too much time on it.

The reason for Pamela and Michael to get down to business makes sense in the context of the time. Life could be cut short for either of them – via enemy planes or dropped bombs – and Pamela can see how much her cousin Christine valued a relationship with her sweetheart. I’m not usually one for quickie physical relationships but here I agree with it. I also like that Pamela still misses certain aspects of marriage including closeness to someone and lovemaking. She’s not shy violet and thrills Michael with demanding her fair share.

Isn’t it just the way in all small towns to have gossipy village women? But I can see the major significance of it then, when a woman’s reputation was so much more important and, as Pamela says, it only takes one slip to lose it. Pamela’s aunt also dislikes what Pamela is doing and feels the right to weigh in on it as it might affect her business. Today, I’d bet few would bat an eyelash but then, the fat would be in the fire when the truth came out.

Pamela is hesitant to rush into anything permanent with Michael, especially marriage, after her first disastrous one. Pamela is also honest and tells Michael about her first marriage rather than just brushing off his proposal. But her cousin Christine urges her to at least listen to Michael and thereby saves the day as Michael proves himself with his offer to wait on marriage until after Pamela meets the folks and talks to his fellow pilots. I like a hero who doesn’t rush his heroine.

Though it’s a shorter story, I don’t mind the quick move towards the HEA as the events of the day did lead to that sort of thing. I appreciate that Pamela stops and thinks about what she wants before agreeing to both the initial affair and anything long term with Michael. Michael, in return, is willing to listen to Pamela’s fears and help lay them to rest. The result is a story I enjoyed reading and a B- grade.

→ Jayne
Previous article: REVIEW: Love Me by Kelly Jamieson
Next Post: My Saturday at the Los Angeles Times Festival of Books