Thanks again for sending an advanced copy of your newest book “Ripe for Pleasure” to Dear Author so we can get an early sneak peak at it. When I heard that it would be set during one of my favorite historical periods, Georgian England, that’s all it took for me to be eager to see what I’d find in it.

In 1783 one of London’s most sought after courtesans is working on her second volume of memoirs which is making several high profile men very anxious. Viola Whedon knows that but frankly doesn’t care. With the proceeds from her books, she can feather her retirement nest against the day when she can no longer command the exorbitant price rich men pay for the privilege of her company. But although she expects to rattle some cages and piss a few people off, she never counted on having her house invaded, her servants terrified and having to flee into the night to escape the hired thugs. Luckily for her Lord Leonidas Vaughan is out on the street and takes command of the situation. 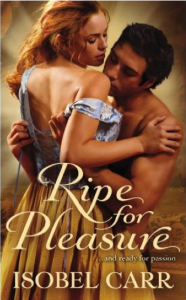 Or was it luck? Unknown to Viola, Leo has been planning to enter Viola’s life ever since he and a cousin discovered hidden family letters which lead them to believe that a Jacobite fortune is hidden somewhere on Viola’s property. Now things have turned ugly as Leo believes Charles will do anything to recover the treasure first. In order to protect Viola, and continue the search himself, Leo devises a plan. He offers himself as a literal protector to Viola and allows her to believe that the cause is a man angry about her upcoming book. Given his reputation in bed, he also challenges her to a game of seduction – something her friends urge her to agree to. But who will fall to whom and what lengths will Leo go to in order to keep the woman he loves safe and in his life?

There are lots of tropes and well used themes here. Let’s see: band of male friends, super hot studly hero who makes all women in London swoon for him, the hero who wagers he’ll seduce the heroine into something, a heroine who initially seems cool to him but who caves almost immediately and joins the swooners, hot sexing with tons of orgasms, a headstrong younger sister who is always getting into scrapes, the fallen heroine who nevertheless is readily accepted into hero’s family. The one thing that I haven’t seen in every third book is the fact that the hero’s Ducal family is unabashedly uncaring of the restraints which hamper those beneath their exalted social rank. Sure, I’ve seen some Dukes do what they want but here the whole family frankly doesn’t give a damn.

You’ve also included not one but TWO secret groups – The League of Younger Sons and the New Female Coterie. Okay, I’m used to seeing the group of guys – must have other future heroes already introduced and ready for sequels – but the society of fallen ladies – whoa, that’s new. But aside from having a tea party or two, nothing comes of it and I still don’t understand the point of it. Will there be future demi-rep heroines?

As for this book, at least heroine is truly fallen. Well and truly a woman who’s been paid for sex and not just a one off but for a number of years and by quite a few protectors with no chance of having her past swept under the rug. Brava. If the heroine’s going to be a whore, then have her be one with no pussy footing around, I say. I like that Viola’s an author and making her own way before Leo crosses her path. She’s intelligent, well spoken and, as seen early in the book, can handle herself in a fight.

What I don’t like how Leo lies and lies to Viola. His actions cost her a great deal and almost get her killed and though he chooses her over his cousin, his repeated actions in placing her in danger don’t sit well with me. And after Charles has shown his hand and his feelings to Leo – and this early in the book – does Leo seek to warn anyone about him? I can see not informing any authorities but if Leo wanted to keep it in the family, he could warn his father the Duke so that he could do something about Charles and keep the snarling villain away from the family. However Leo stays mum and at that, I really did shake my head as to me these aren’t the actions of a hero.

Expanding on this, I hate the villain. I hate that he gets away with as much as he does. Yes, he’s family to Leo but good Lord how much more infamy does it take? His actions have already cost Viola’s footman his life, injured several of Leo’s footmen, burned down a mews, torn up a house and ultimately allowed Viola to be abducted and brutally beaten. When he makes his final play for the treasure I wanted to scream “enough already! I’m ready to shoot the bastard.” I even cocked my finger and fired it at the page.

I’m not sure I saw Leo fall in love with Viola. Lust certainly, possessiveness oh yeah but love….hmmm, not so much. Meanwhile, Viola loves her orgasms, she loves the hot springs bath at Leo’s country estate Dyrham, she lusts after Leo but it seems she falls in love with him because the plot says so. And in the beginning, Leo promises seduction. He further vows that Viola will give into his seduction. I’m anticipating a long, slow, arousing seduction but instead after one public scene at the theater – whamo! she collapses into his arms like a “simple assembly required” item that’s missing two bolts and a nut listed as things that should be in the packaging.

However once the plot tells me that Leo and Viola are in love I don’t have a problem with their marriage. 1) hero is from a Ducal family which I imagine has a lot of clout and is slightly more above the rest of society. 2) the hero is a younger son with at least two nephews. 3) you mentioned the historical examples of Charles Fox’s marriage to Elizabeth Armistead and the antics of Lady Sarah Lennox – daughter of Duke of Richmond. And 4) it seems like Leo and Viola plan to live a life in the country thus not inflicting themselves on society.

The book is well written, as always, fast paced and filled with sequel bait but I must say I’m disappointed with the feeling that I’ve read the same – or at least similar – plots and characters in the past. It’s all nice and fairly safe but nothing new. The relationship between the hero and heroine shown in the except for the second book sounds promising but for this one, I’d give it a C.