REVIEW: Time of the Wolf by Elizabeth Harris 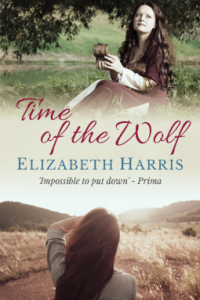 The evil had lasted two thousand years…and only love could break it’s spell.

Henry and Thea felt an almost supernatural attachment to the Fens of East Anglia and to the woman who guided them there – Florence, Henry’s grandmother. The two were fascinated by her stories of Dark-Ages passions, murder and betrayal. They knew that through her stories, Florence was trying to tell them something else, and that her interest in their growing love for each other seemed to have another dimension…

Unknown to them, their passion had an extraordinary power — one that could awaken the ghosts of an evil that has survived the passing of the centuries. Tormented by visions of the past, knowing the future was not theirs, Henry and Thea are thrown back to the Dark-Age world of The House of the Wolf and a destiny from which only one person can save them …

Once again I start one of your books having no idea what I’m going to get but willing to go along and see what happens. Henry, Thea and Florence are all strong characters and we see them from all sides – the good and the bad. I also enjoyed the chance to learn more about the history of East Anglia and the fens.

Starting the story when the protagonists are children? Why not. Henry is fantastic. He’s quite mature for a 9 year old and goes about getting what he wants with quiet determination. He admits he might have been a bit of a sod in how he faced off with his parents but since they never wanted a child in the first place and will be happier in Hong Kong without him, he doesn’t let it bother him too much. Henry is wise beyond his years if only because his upbringing has made him so.

Thea comes from a difficult family life as well and as with Henry, she found refuge and acceptance from Florence. They both accept the fact that Florence has a way of getting exactly what she wants. Anyway, she makes every day a possible adventure, lures them into learning and does it in a low key, hands off way almost designed to spark their interest and whole hearted cooperation.

Henry and Thea are compelling characters. I’m usually not enamored of children in books so to be gripped by two nine year olds alternately telling their first person narratives astonished me. Both are old souls with – for different reasons – ghastly absentee parents. Good thing they have Florence but then as the story unfolds, it’s clear that this is no happy accident they met nor are these unplanned events even if they still aren’t at ease at the thought of each other. It takes years for that but when they finally meet again, the connection is instant. Florence is far more than she seems and the dreams, feelings and familiar knowledge Henry and Thea have of past events is not born of suggestion or the history books and stories Florence has poured into them. There’s much more to it than that.

The story advances on a slow boil, now getting roiling then backing down a bit. Poor Thea gets the worst of it initially with terrifying visions of a past based on the Dark Ages of East Anglia. The finale is sweet, passionate, terrifying and cathartic. It also rights an old wrong and paves the way for love to – finally – triumph.

I am both surprised and yet unsurprised at how much I like this book. Children maturing into YA then NA? Not generally a fan but here I am. Stories that cover more than 15 years? Nope not for me but this I ate up. What I expected and wanted to find – unusual woo-woo, three dimensional characters complete with flaws, the mix of history and contemporary – are all here plus a romance that makes me totally believe. Henry’s epilogue – and in most books those leave me cold – and especially the last few sentences is an added bonus of wow. B+