REVIEW: The Wrath and the Dawn by Renée Ahdieh

As a child, I was given a copy of The Thousand and One Nights. It contained some of the most magical and satisfying fairy tales I’d ever read. As its readers know, the book begins with a frame device. The fairy tales are told by Scheherazade to her husband, a king who takes a new bride each day, and orders each of his wives killed upon the next dawn. 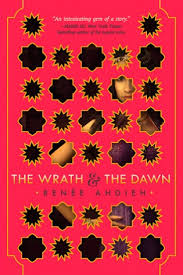 Your YA fantasy novel, The Wrath and the Dawn, takes this premise and expands it into the story of Shahrzad, or Shazi, as her friends call her, a girl who volunteers to marry the murderous boy caliph, Khalid. Khalid has married—and executed—a number of girls, including Shiva, Shazi’s best friend.

The novel is set in a fantasy setting modeled on Persia and begins with a prologue which gives the reader a strong hint as to Khalid’s true character, and allows for the possibility that he is being compelled to marry and execute the girls against his will. But Shazi’s goal in volunteering to marry Khalid is as simple as it is hard to reach: revenge.

Shortly after Shahrzad’s marriage, we meet Tariq, the boy she had thought to marry before Shiva’s death. Tariq loves Shazi and understands her desire for vengeance – Shiva was his cousin—but he is beyond upset at what she has done. Her marriage to Khalid galvanizes Tariq into action, precipitating a plot to depose the caliph.

Accompanying Tariq is Rahim, a friend since childhood to both Tariq and Shazi. Shazi also has a family that worries about her safety, her ineffectual father, Jahandar, and her younger sister, Irsa, whom she has urged to leave the kingdom. Jahandar is in possession of a magical book that he hopes will grant him powers to help effect his daughter’s rescue.

On their wedding night, Shahrzad waits a long time for her husband to arrive in her bedchamber. When he finally does, he warns her not to expect to be the one to break the cycle of the deaths of his wives. Shazi assures Khalid that she doesn’t harbor delusions, but doesn’t reveal that her true intention is to kill him. Instead, she lifts her mantle and offers her body to him.

After a brief, perfunctory consummation, Shazi and Khalid dine together. Then she makes a single request, that he listen to her tell him a story. As in The Thousand and One Nights, the tale she tells rivets the caliph’s attention, and he spares her life until she can finish it.

The next day, Shazi is assigned a handmaiden from Thebes, Despina, and a bodyguard known only as the Rajput. Shahrzad finds her way to the training ground, where she meets Jalal, a cousin of Khalid’s as well as son of Captain al-Khoury, the king’s general. Shazi asks Jalal to teach her to shoot arrows with a bow, but doesn’t do a sufficient job of disguising her expertise with this weapon.

That night, Shazi and Khalid talk again. Khalid wants her to reveal why she volunteered, and Shazi asks him to promise not to kill her. He refuses, and they sleep together again. Then she finishes the fairy tale of the night before, and begins another. Captain Al-Khoury then comes to escort her to her execution, but once again, Khalid spares her life.

But how long will Shazi’s reprieve last? Long enough for Tariq to overthrow Khalid and come to her rescue? Long enough for her to find the resolve to kill Khalid herself? Or long enough to develop feelings for the quiet, conflicted boy-husband who will not reveal to her his reasons for killing his wives no matter how she tries to force out the truth?

As I mentioned earlier, readers get a pretty big clue as to Khalid’s motives, and I at least, initially interpreted this to mean that Khalid’s hand was forced by some supernatural means. This was my strong suspicion almost from page one, though the truth is not revealed until very late in this novel. Since I’m trying to refrain from spoiling the book for readers, I won’t say whether my suspicions proved correct.

Shazi, on the other hand, isn’t given this hint. She believes from the first that Khalid is monstrous and evil, as well as responsible for the death of her best friend. This conflict makes the book problematic, even as it kept me turning the pages to see how things could possibly be resolved.

The characters at the center of the triangle, Shahrzad, Khalid and Tariq, are all interesting and complicated. Shazi is especially intriguing, being a brave girl who creates opportunities for action and choice for herself. She is initially filled with anger and hatred, then confused and conflicted.

Although the sex takes place off page or is summarized in one or two lines, I still struggled with the sex initial scenes, in which Shazi consented, but only so that she could get close to Khalid and be afforded the opportunity to kill him later. Her young age, sixteen, made it very hard for me to read.

Khalid, two years older, is shrouded in mystery, so I don’t want to say too much about him, but he is a compelling figure, particularly due to his stillness and quietness. I’m still not sure how I feel toward him, due to the following SPOILER: I think he might have been able to spare the lives of his brides, had he been willing to sacrifice his own life for theirs. That he did not do so is a big point against him, or perhaps a point against the plot of the book, for leaving this as a possibility.

Tariq is also interesting, beginning very sympathetic and loveable as the boy devoted to Shazi since their preteen years. There is an interesting contrast between him and Khalid which Shazi begins to notice in the book’s second half. For Tariq, things are black and white, whereas Khalid, and Shazi increasingly as well, see the situation a bit differently.

Unfortunately the secondary characters feel considerably flatter. There is a secondary romance between Jalal and Despina that never lives up to its potential. I liked Jalal, and I liked Despina, so I wanted more showing and less telling when it came to their relationship.

The plot has a lot of forward momentum, but the book feels sketched out at times. There were several points when I wanted the characters’ thoughts and emotions to be fleshed out more. The Persian setting is lovely, though, and it’s great to see characters from this background portrayed sympathetically.

Details like the foods the characters eat or the décor of the rooms are lovingly described. At times I wished the characters’ conflicts had been given the same level of development. I wanted more complexity—the plot demands it—but I didn’t get it until close to the end.

The book read rushed in places, with dialogue that was almost clipped. Occasionally the exchanges between the characters even sounded modern to my ear, such as when Despina exclaimed “Holy Hera!”

Still, I liked the heroine of the novel a great deal, and appreciated Khalid and Tariq’s characters’ too. I’m also happy to say that the triangle is resolved quickly, and doesn’t appear to be a conflict that will drag on for three books.

I expect a stronger fantasy element from the sequel, since a magical carpet makes an appearance in this one. There’s a chance I will read the next book since this one was such a quick and page-turning read and had an appealing heroine, but it will probably be a library read for me. C+ for The Wrath and the Dawn.