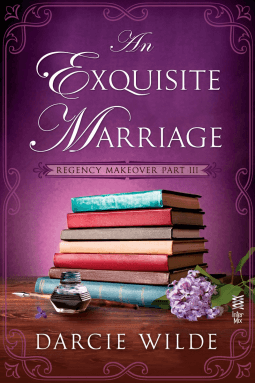 Everyone knows Helene Fitzgerald will never marry. She and her wallflower friends may be on the rise socially, but Helene is still nothing but a sharp-tongued bluestocking who very publically renounced her only marriage offer. Worse, her family is in serious financial trouble. So, how is Helene suddenly attracting the eye of Marcus Endicott, the Duke of Windford and one of England’s most eligible aristocrats?

Trapped by his father’s long legacy of mistakes, Marcus never thought he’d find a woman he’d want enough to risk his heart. But what began as a contentious friendship has transformed into a passion beyond anything he dreamed possible. Now, Marcus’s old secrets are threatening to destroy everything Helene and her friends have worked for. Can any passion be strong enough to carry Helene and Marcus away from their pasts?

Part three of this series and it’s time to match up the last of the Wallflowers who aim to change the London ton’s view of them. Lady Helene has been hurt before while Marcus has promised to himself that he won’t sexually indulge himself much less get married unless it’s to a woman he loves and trusts. Can they work past their previous issues and pain to find a HEA?

As initially seen in book 1,“The Bride Behind the Curtain”, Marcus and Helene strike sparks. To his amazement, she is immune to his frowns. His curiosity is, of course, aroused. Her droll and dryly humorous responses also – almost – make him smile. Something he tries to hide. Still the dratted woman keeps saying things that make him come close to losing control of his laughter. So since frowning didn’t work, he tries glowering – to no effect – then looming. Looming is always good. Except on her. Then she proceeds to turn his responsibilities as the host around on him and orders him out of his own library. The nerve of her! But of course she is correct. Drat it. A lot of this is a recap of the first book but since it’s been a month or so, I didn’t mind the refresher and it will also work to allow newbies to start here if they wish.

Soon, though, this is put out of his mind when an old friend from the naval office – and aren’t there a lot of these in Regency stories? – sidles up to Marcus about decoding Prussian messages in his spare time. What spare time, as Marcus is one of the good Dukes who actually spend time on their estate and manage it well for their tenants and dependents. Yet… the prospect of using his intellect this way intrigues him.

As the Season progresses, the three young ladies begin their triumphant transformation and Marcus finds himself watching for Lady Helene who clues him in to the reality that women of the ton face. Helene might not like being paraded about or playing by Society’s rules but it is what it is and she’s trying, along with Adele and Madelene, to get what she needs – a good match. It’s too bad for Helene that her very public dismissal of her former fiancé has made other men avoid her – especially dancing which is something she loves so much and which Marcus does so well. When someone from her past creates a public scene, it’s also Marcus who saves the day. Helene might day dream about something with him but the cold hard reality of her plans to save her siblings must come first and if she achieves that, her hope of marriage and position in the haute ton will be gone. Meanwhile Marcus is revealed to have family concerns of his own, ones he inherited from his womanizing father. Ah, yet another similarity between these two.

Slowly and neatly the concerns and strengths of Helene and Marcus are brought out and begin to be knitted together, even if they’re unaware of it at the time. Their growing interest and attraction for each other flourishes too, when they’re not hitting nerves and raw spots. Helene’s observations about the expected and enforced idleness and boredom of the ton being corrosive to them hits home. Marcus’s whole life since inheriting the Dukedom has been work and effort to set straight what his father let go to hell. Now that this is fixed, he finally admits to longing for something else important, something useful to do. In fact, just what has been offered to him. He can also see someone like Helene, smart, incisive and a possible helpmeet sharing estate concerns and giving him needed boosts. She is the one of whom he thinks when he has knotty issues plaguing him and with the help of the Wallflowers and their chaperone he successfully navigates one thorny problem.

The final conflict is born of events which have been delineated and plotted across the course of the book. Helene’s oft mentioned humiliating collapse of her first betrothal and Marcus’s strong family duty and efforts to clean up his father’s messes unite and clash as those who wish them harm stir the pot and gleefully await the outcome of two strong willed and honorable people faced with that which will break them. From what Helene finally reveals to Marcus, the poisoned dart which was aimed at her was the best way to devastate her while the one who was after Marcus cleverly twisted the details to paint him the blackguard. The results were all those people wanted and what would hurt our two the most. The Big Mis, and yes there is a tiny one, only lasts a short amount of time before Marcus, bless him, pushes for the truth to save his marriage to the woman he loves. And Helene’s response, when she finally knows the real story, is to think of him but also of others, something Marcus had realized she does with little demanded fanfare for her efforts. All’s Well That Ends well with the Wallflowers triumphing and Society seeing it. Now as to what Mr. Cross and Miss Sewell are up to, well I guess that’s for the next installment. B