REVIEW: The Ruin of a Rogue by Miranda Neville

Last summer, while in the midst of a reading slump, I tried to read The Ruin of a Rogue. I think I got about two and half chapters in before I gave up. Since I don’t usually care for con artist characters and hadn’t yet come to know and like the hero, who schemed to seduce an inexperienced heiress and either marry her for her money or allow himself to be bought off by her guardian, it was hard for me to stay engaged. 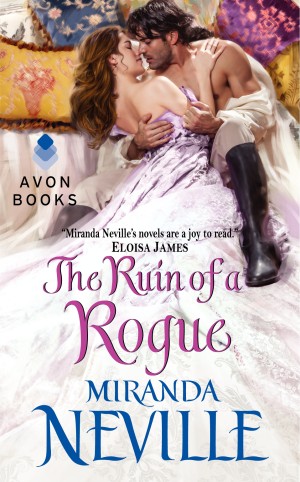 Still, I have enjoyed your books in the past, and you have a new book in the same series coming out on June 24th of this year, titled Lady Windermere’s Lover. I wanted to try it, but since I hate reading out of order, I decided to give The Ruin of a Rogue a second chance.

Happily, by this time my reading slump was over. Even more happily, this time I found that while the beginning didn’t engage me as much as what came later, I was able to enjoy this section for its amusing humor.

The year is 1800 and Anne Brotherton, “granddaughter and heiress to the last Earl of Camber,” is much pursued by fortune hunters. Among them is Marcus Lithgow, a gamester and adventurer who plans to go about his fortune hunting more cleverly than the rest. To that end, he has read up on antiquities, Anne Brotherton’s passion, and has learned enough to appear knowledgeable on the subject.

Marcus first engages Anne in conversation during a social occasion by discussing their host’s small Greek and Roman figures which have caught the heiress’ attention. Anne, whose fortune is controlled by her strict guardian, has been warned against fortune hunters and she is cautious.

But when Marcus mentioned a book on the subject of antiquities found in Bath, Anne decides to search out the volume. She fails to find it, and Marcus, who has “accidentally” bumped into Anne at the circulating library, offers to accompany her to a bookstore where he has seen the book.

The bookstore is in a seedy neighborhood and Marcus has given the book to its owner and paid him to sell it to Anne. He also pays the driver of a cart to very nearly run them over on their way out, so that Marcus can “rescue” Anne and hold her close.

The trouble is, Marcus likes Anne. He wouldn’t even mind being forced to marry her. His plan is to let her guardian buy him off since it’s doubtful the guardian would allow such a marriage. Marcus, whose father has taught him cons, generally prefers to gain money by winning honestly at card games, but he is in the middle of the worst losing streak of his gambling career and he dislikes cheating.

Even a letter from his dead father, claiming to have left Marcus hidden riches at his uncle’s estate, fails to convince Marcus to change course. An heiress’s fortune is far more reliable than Marcus’s dishonest father, and Anne is beginning to fall for Marcus.

But one day, Anne is in the garden of her chaperone Lady Windermere’s house when Marcus is visiting a friend next door. Despite oblique warnings from her cousin Caro, and additional ones from Lady Windermere, Anne has all but decided to run off with Marcus and evade the boring marriage her guardian wants her to enter when Marcus and his host, the Duke of Denford, step into the neighboring garden, and Anne overhears Marcus boast of his success at bamboozling her.

On hearing Marcus describe her as a “spoiled heiress,” Anne decides to bamboozle him—and show him how a spoiled heiress would really behave.

Just how bad a time will Anne give Marcus? And how will Marcus react? Will they find his father’s hidden treasure? Will they find something even more valuable in each other? And will Anne make an honest man out of Marcus in more than just the figurative sense?

I’ve said in the past that I find your characters charming because they have flaws and foibles and vulnerabilities. Generally speaking, your characters goodhearted people but they make human mistakes.

Marcus starts out more self-serving than most of them, and at first I was a little bored by that. I prefer to feel invested in a character’s fate right away, but initially Marcus was neither awful enough to be reluctantly fascinating, nor likeable enough for me to care if he got his heiress.

Fortunately as I continued reading I began to understand why. Marcus had a moral compass, but it was a bit rusty, and he didn’t always go in the direction in which it pointed. This had much to do with his upbringing—his father spent Marcus’ formative years up to no good, and not above using his adorable child to reel in women whom he would later fleece.

What helped me like Marcus was that I began to see that he wasn’t happy with the life he led. He envied honest people their lives, but he didn’t believe he could be one of them. Still, secretly part of him wished he could, and eventually he started believing that it might be possible.

I greatly appreciated the fact that Marcus didn’t change his stripes for Anne—ultimately he did it for himself. Anne served as an incentive and a source of encouragement, but it was at least as much the case that she allowed her attraction to Marcus to grow when she saw evidence that Marcus wanted to be better than the choices he’d made in the past.

The seeds of Marcus’ transformation were there before he ever met Anne. That is what I consider a redemption story done right.

Anne herself is in some ways harder to sum up than Marcus. A high concept character like Marcus whose arc involves putting aside the temptation to win money unscrupulously in order to live a life of personal integrity is easy to describe, but on paper Anne, an inexperienced girl who has no control over her fortune, sounds like a hundred other heroines, though in reality she stands out.

Here’s what I appreciated about Anne: she wasn’t foolhardy, and she didn’t lack a sense of self preservation—or lack sense more generally. She started out cautious, and even when she first became infatuated with Marcus, she thought to marry him in order to escape marriage to another man to whom she wasn’t attracted. She wasn’t rushing into a disastrous situation for no reason other than infatuation.

Later, once she figured out what Marcus was up to, she became even more cautious. She got her revenge on Marcus, and if it was a little mean and inconsiderate, it was also no less than he deserved, and later she apologized for the effects her own con had on his situation.

The more I read, the more my respect for Anne grew. She was smart enough to have insights into Marcus’ character—to see his flaws and his strengths. And when she began to allow herself to trust him, she knew she risked her heart and she also knew what she was risking it for.

The secondary characters enhanced the book, especially Marcus’ droll valet, Travis, whose life Marcus had saved and who had adopted Marcus as a result. Later in the book, Caro and Thomas from The Importance of Being Wicked appear, and some loose ends from their own book that pertained to Marcus are wrapped up in this one.

The steaminess level is not what I’m used to from most of your books—this one was hotter and I’m still trying to decide how I feel about that. It’s hard to articulate, but Marcus and Anne were so real to me that as with Caro and Thomas in The Importance of Being Wicked, I felt a bit like I was intruding on their privacy.

The Ruin of a Rogue has the same light feel as your earlier novels, but like them it also has something to say. It has charm and sweetness, but it’s also satisfying. B/B+