Reading/Watching List by Jayne for the past few weeks. 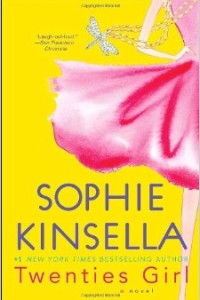 Lara Lington has always had an overactive imagination, but suddenly that imagination seems to be in overdrive. Normal professional twenty-something young women don’t get visited by ghosts. Or do they?

When the spirit of Lara’s great-aunt Sadie—a feisty, demanding girl with firm ideas about fashion, love, and the right way to dance—mysteriously appears, she has one request: Lara must find a missing necklace that had been in Sadie’s possession for more than seventy-five years, because Sadie cannot rest without it.

Chick Lit can be silly at times but if I like the characters or plot enough then this doesn’t bother me. I can revel and wallow in the silly. But if I’m not getting any love for the characters or the plot seems to be moving nowhere, then reading Chick Lit becomes a chore in silly. Such is the case here. To me, Lara is more often than not an obsessed-with-her-ex-boyfriend dingbat and her ghostly great-aunt Sadie is a like a spectral mosquito whom I’d love to swat out of my reading life. I read to the half-way mark and couldn’t keep going knowing how many other wonderful books there are in the world. 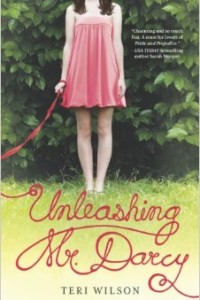 It is a truth universally acknowledged that a single woman teetering on the verge of thirty must be in want of a husband.

Not true for Manhattanite Elizabeth Scott. Instead of planning a walk down the aisle, she’s crossing the pond with the only companion she needs—her darling dog, Bliss. Caring for a pack of show dogs in England seems the perfect distraction from the scandal that ruined her teaching career, and her reputation, in New York. What she doesn’t count on is an unstoppable attraction to billionaire dog breeder Donovan Darcy. The London tycoon’s a little bit arrogant, a whole lot sexy…and the chemistry between them is disarming. When passion is finally unleashed, might Elizabeth hope to take home more than a blue ribbon?

Often I jot down thoughts and impressions while I’m reading a book and here’s what I said about this one:

I have a lot of trouble believing in the opening events in the show ring. I’ve been to plenty of AKC shows and not only have never heard this kind of interaction between a judge and handler but seriously question if it would happen – yes, I know this is fiction but I need to be able to swing some belief

And what about quarantine? Isn’t this still the rule for animals brought into GB? Yes, see above “this is fiction” statement but honestly…

Where’s the conflict? Darcy seems to be mad about her from the get-go. He’s rich, he’s in love with her and ???

At this point I put it aside. I might return at a later date but have my doubts. 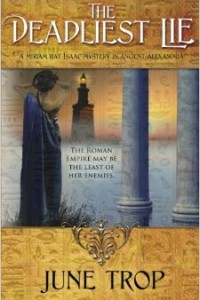 The Deadliest Lie by June Trop

She’s a brilliant alchemist—with a talent for solving mysteries.

Miriam bat Isaac is a budding scholar in first-century CE Alexandria, though her dreams seem doomed. Who in her household or among her father’s Shabbat guests stole the scrolls containing the Alchemical League’s valuable formulas? Perhaps the thief was even her frantic father, on the cusp of financial ruin, eager for Miriam to end her dalliance with a handsome jeweler and marry into an honorable and wealthy family. Or her rebellious brother, intent on raising money to travel to Capua so he can enroll in the Roman Empire’s most renowned gladiator school. Or her faint-hearted fiancé, who begrudges her preoccupation with alchemy and yearns for their forthcoming marriage?

And how did the thief manage to steal them? Miriam is not only faced with a baffling puzzle, but, to recover the scrolls, she must stalk the culprit through the sinister alleys of Alexandria’s claustrophobic underbelly. The Romans who keep a harsh watch over her Jewish community are trouble enough.

Miriam is based on the true personage of Maria Hebrea, the legendary founder of Western alchemy, who developed the concepts and apparatus alchemists and chemists would use for 1500 years.

I should have loved this book. It’s a historical, with a cool setting and what sounds like an interesting hook but …OMFG – what a mind numbing info dump of a book. The first 1/4 of book is basically a boring Shabbot dinner. Casual brutal violence is lovingly described along with gross-me-out vomiting scenes. The enormous amount of expositional dialoging is enough to make my eyes cross before rolling back in my head. Reading this is like wading through knee high surf at the beach instead of being able to skip down the sand. I usually love historical details but this read like over adjectified non-fiction which has abso-fucking-lutely nothing to do with any hint of a plot. I only made it through two chapters of this one before tossing in the towel. It does have a beautiful cover, though. 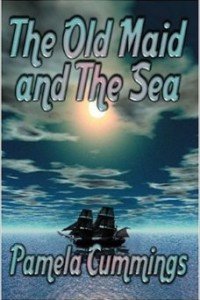 The Old Maid and the Sea by Pamela Cummings

Marie Cabot, daughter of a wealthy Boston family, has had enough of money-grasping, faithless suitors and decides to renounce men and marriage and live a life of freedom as a woman of independence. If only she weren’t young and beautiful, people might believe her desire to become an old maid.

Tired of dodging husband-hunting debutantes and with a broken heart of his own, Lieutenant John Appleton wants nothing to do with society ladies.

But when duty calls on John and his Navy frigate to rescue Marie from a pirate attack in the Mediterranean Sea and return her to the States, neither one foresees a romance on the high seas.

I wanted swashbuckling and sea adventure. Instead I’m getting seasickness, cutesy and too many stamped feet and overbearingness. This is an early book and it shows it. Marie gets herself into situations from which she needs saving but does she ever explain how she innocently comes to need John’s help? Of course not. All his life, John has seen women using their feminine whiles to twist men around their fingers so does he immediately jump to the conclusion that Marie is doing the same? Of course he does. Does the book become a painful exercise in misunderstandings? At the half-way point that’s all I saw with no relief on the horizon. I pulled up anchor for now but haven’t quite cut it yet.

I’ve been watching a lot of documentaries lately. Here’s a sampling of the ones I enjoyed the most.

“20 Feet from Stardom” tells about backup vocalists for the stars. Many of these women sang for the greats during the 1960s-80s and I was tapping my feet, snapping my fingers and at times dancing along with the music – much to the amusement of my cats.

“Pianomania” – “This engaging documentary profiles Stefan Knüpfer, the master tuner for Steinway & Sons, who is tasked with the often-demanding job of pairing world-famous pianists with the right instrument and supervising all aspects of each piano’s performance.” Fascinating to watch and listen to, this one shows just how much effort is involved with selecting the perfect piano to match a particular artist’s needs. Knüpfer is a man obsessed with finding just the right instrument whether for a live concert or a new recording.

“The Story of India” – “Explore the rich culture of India with this visually striking program that takes viewers on a fascinating journey from the country’s ancient origins to its significant place in our contemporary global community. Hosted by noted British historian Michael Wood, the series explores the many facets of Indian society, including the arts, spiritual traditions, the diverse population, the rising high-tech business community and much more.” I was looking for something to help me understand the country and its history but this seemed to me to be more of an overview. If anyone can suggest something that gives more in-depth information please let me know.

“Dirty Jobs” – “Ready to tackle any job no matter how disgusting or hazardous, host Mike Rowe travels across America to work side by side with the men and women who perform such thankless tasks as inspecting sewers, retrieving roadkill and handling snakes.” God, I love this show. Mike Rowe is ready and willing to take on almost any dirty job and yes, some of them are amazingly disgusting. I could listen to this man’s voice all day long. Most of the jobs involve lots of poo or dangerous/cantankerous animals or both.

“New York” – This is a loving exploration and tribute to NYC by Ric Burns, brother of Ken. Right now I’m about halfway through the multi-disc series. Some of the information is fascinating and some seems to circle around the same thing a few times before finally moving on. Have fun by turning it into a drinking game. Take a swig whenever Walt Whitman, Frederick Law Olmstead or F. Scott Fitzgerald are mentioned.

“Nature: A Murder of Crows”- “Long associated with darkness and foreboding, crows are collectively called a “murder.” But they’re actually monogamous, highly social and some of the most intelligent animals on the planet, as explored in this eye-opening edition of “Nature.” Among other takeaways, you’ll learn about crows’ remarkable ability to recognize and remember individual human beings … to the point of being able to pick them out of a crowd up to two years later.” Who knew crows are so intelligent? I certainly didn’t.

These two are miniseries which were both filmed in the early 1970s (and it shows).

“The Shadow of the Tower” – This tells the story of Henry VII and the start of the Tudor dynasty. Some of the episodes are better than others and I’ve found that so far I’ve liked the ones that don’t have Elizabeth of York in them. In order to convey historical details, the writers gave her character a lot of exposition to mouth. Henry, on the other hand, is fascinating. I haven’t finished the series but at this point my favorite episode is about the clumsy and, at times, hilarious attempts of certain plotters to poison King Henry. Watch for an early English Upperclass Twit of the Year, his uncle who thinks it’s fine to kill the King in open battle but poisoning is for those damned sly Italians and a damned, sly Italian who takes them both to the bank.

“The Adams Chronicles” – Another multidisc series, this is about John and Abigail Adams and their descendants. I wasn’t sure what to expect but was pleasantly surprised that I enjoyed the first 4 episodes which start with John and Abigail’s courtship and follow them through the Revolution. However when I started the next disc, the writing became stilted and the acting stiff and clumsy. I probably won’t be continuing any further.

And finally on to a movie. I’ve been meaning to watch “Arn: The Knight Templar” and finally got around to it. I didn’t realize that there are two ways to see this – either a two disc miniseries or an edited one disc movie. I watched the movie. The costumes look authentic, the fighting is well choreographed, the sets are period cold and drab but when the film finished I sat there thinking – I spent over 2 hours watching these long separated lovers and this is all I get?! Be aware this film is more bitter than sweet.