REVIEW: Her Kind of Man by Nona Raines

KaetrinC ReviewsContemporary / novella / queer / transgender / truckersComments Off on REVIEW: Her Kind of Man by Nona Raines 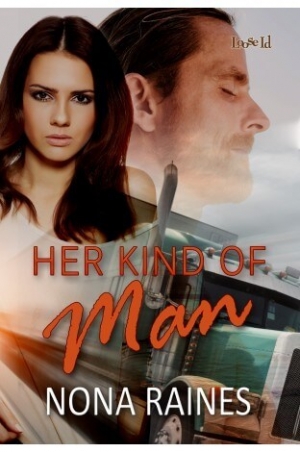 I wanted to diversify my queer romance reading a little more and read more about transgender characters so when I saw this one recently in a newsletter I subscribe to (one of a thousand apparently *sigh*) and, knowing your work had been reviewed favourably here by Jayne before, I went ahead and bought it.

Unfortunately, it seems that it is the third in a series about the same characters and I missed the first two books. That said, the story stood alone well enough. There was background I didn’t know about and which made me curious but it wasn’t essential I know about it.  However, it may be that I’d have been more favourably disposed to Roy, the hero, if I’d read the earlier books.  For most of this novella, he came across to me in not so good a light.

Roy works for a trucking company as (I gather) a dispatcher. He is dating (and in love with) Venetia, a trans woman who runs Spectrum, an organisation for LGBTQI youth which provides them with friendship, activities and counseling – it’s a “safe space” for those who are often very vulnerable in society.  Roy helps out with Spectrum too but his personal life is completely separate to his work.

He hasn’t disclosed to his colleagues that his brother was gay, they don’t know he volunteers with Spectrum and they don’t know Venetia is trans (not that the latter is really any of their business). The men he works with tend to be rough, redneck types, who are big on beer, bigotry and queerphobia. He thinks he is protecting Venetia and Spectrum by not saying anything to the guys he works with when they make slurs against “the gays” and it takes him most of the story to realise he’s mostly protecting himself.

Things come to a head when a family fun day run by the trucking company Roy works with (and which Roy mostly arranged) is “crashed” by some of the Spectrum youth. They set up a stall and give away cookies and have some pamphlets available. It’s not violent or confrontational at all but quite a few of the attendees freak out, there is a fight and the whole thing makes the news. Roy can no longer keep his work and personal lives separate and it forces him to take a good hard look at himself – but not before he pushes Venetia away because she thinks he’s ashamed of her.

You did a great job of showing how bigoted people can be bigoted and it was sometimes hard for me to see Roy as not-bigoted when he didn’t initially stand up for what he believed in. I understand that discretion is sometimes the better part of valour but Roy is a big tough trucker dude – sure, he’s as vulnerable as the next person to a surprise attack from behind, but he’s better able to take care of himself against a run-of-the-mill bully than the newly-out Spectrum youth and possibly also Venetia.  He’s also in a unique position to speak to a group of people who (in the book at least) don’t have much interaction with queer people.  Roy does and he speaks both languages, if you will. He can be, at least in some small way, a bridge – but it takes him a long time to realise that. While he was doing that realising I can’t say I liked him all that much.

This book is more about Roy’s journey but what there was of Venetia I liked. She’s had it really tough in a lot of ways (from what I gathered) and has fought hard to stand up and speak proudly for herself and others.

What I can’t tell is if the novella took some shortcuts because of characterisations explored in the earlier books, or whether the characterisations were just very broad brush and kind of lifeless.   I said the story stood alone well – and it does, in the sense that there is a clear beginning, middle and end, but it may well be it was never intended for readers to pick up this novella as a gateway into the series.  I didn’t realise until I was well into the novella that this might be the case. In that sense, my review may well be of little use. However, based on what I read, Her Kind of Man gets a C.