REVIEW: The Kwanzaa Brunch: A Holiday Novella (The Holiday Shorts) by DL White 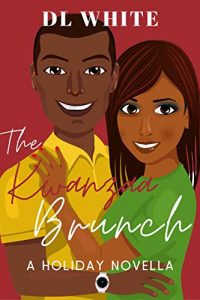 A fated brunch and an unlikely Cupid…

Sienna Charles is tired of the same old, same old. Same old job, same old city, same old friends. Same old men. Just when she’s relegated herself to living Groundhog’s Day, romance edition, Booker Lasalle swaggers into her life, courtesy an open position at Precision Software. He’s new— to the company, to the city and, most importantly, to her.

Booker Lasalle is making a new life for himself. He relocated to an Atlanta suburb, leaving a stressful job and an ex-wife behind for a great job with growth potential. He’s turning over a new leaf— no more falling for the first pretty woman that crosses his path… like the witty, gorgeous and obviously interested analyst at Precision. Everything about her tempts Booker to throw that “new leaf” plan out of the window.

I came across this book but read your suggestion to start with “Unexpected” first so I wouldn’t ruin for myself how that ended. For readers who want to jump straight into the mini-series with this book, it’s okay since the MCs here are not in the first book. But it’s so much fun reading about Faith and Anthony – who are part of the friends group that binds everyone together – that I do recommend beginning there.

Sienna Charles is a picky eater and if not for some strong arm guilting and knowing the boss will be there, she’d have skipped the company potluck. But then she would have also missed meeting Booker LaSalle for a few more days. The four tiered Kwanzaa cake that the boss (who can’t cook but doesn’t seem to know it) made certainly wouldn’t have lured Sienna down from her office. Perhaps she ought to take a leaf from Booker’s book and let Anthony, who does advanced scouting among their coworkers’ offerings, steer her around the choices on the buffet table.

Booker might be new and have a workplace romance in his rear view mirror but he can appreciate how fine Sienna looks. Plus her “take no shit” attitude impresses him. When each later asks Anthony about the other, he throws his hands up and warns them that he’s not going to matchmake or take any responsibility if they date. Anthony also doesn’t want to hear anything about it. Will Sienna listen to two of her best friends who have her chickenshit dating pattern down straight? And is Booker ready to try another romance along with his new job?

This is another fun story about mature adults who don’t act stupidly. There’s no cutesy set-up and (thank God) no one acts like a prat, idiot, or is clumsy. I also enjoyed watching more of the long standing relationship between Faith and Anthony and all their friends. You can really tell that these people like each other. Yay that Booker also has his guy friends and plans to keep up with them even in his new locale. Given the shorter time frame for “The Kwanzaa Brunch,” I was perfectly happy with the HFN ending and actually would love to see more of this series. B+

→ Jayne
Previous article: Review: Project Hero by Briar Prescott
Next Post: REVIEW: Once Upon a Winter Wedding by Jeannie Watt