REVIEW: Once Upon a Winter Wedding by Jeannie Watt 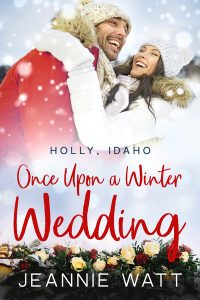 Can opposites attract and plan the perfect winter wedding?

Free-wheeling Stevie Evans is thrilled when her best friend announces she’s getting married and promises to help, never imagining she’d play wedding planner with her bestie’s uptight brother, Brant. She and Brant clashed several years ago and she’s avoided him ever since. But this time she can’t run or hide, and the buzz of attraction is stronger than ever.

Brant Gilroy’s meticulous life plan takes an unexpected turn when he hits a career bump on the same day as his sister’s wedding announcement. She wants to get married at the family tree farm, which he’s been restoring. Brant’s determined to make her day special despite his uncertain future, although he dreads working with her best friend—a woman who’s his complete opposite. So why can’t he get her out of his head?

As Brant and Stevie work together, Brant begins to wonder if they have more in common than they suspected. But how can he convince her that opposites can sometimes make the perfect team?

I keep saying I need to get back to reading your books and this is a perfect example of why. Adults acting as adults, believable situations, understated humor, well rounded characters – even the secondary ones, and The Labrador Retriever Theory. That last bit gets two thumbs up (two paws up?) from me. Plus the heroine has a cool sounding cat named Maynard. I do wish there had been more of Maynard but I understand he needed his sleep.

Many years ago Brant and Stevie had an argument during which harsh words were exchanged. Brant’s words came across to Stevie as even harsher as she admired him and in his concern for his sister, he didn’t mince his words. When Brant’s sister – who is getting out of the military soon but is overseas now – asks her brother and her best friend to throw together a four week wedding for her (the groom is also overseas), they paste on smiles and agree.

They immediately decide to put everything aside in order to get this wedding done for the friend/sister they both love. Sigh … Okay so they do need to discuss the past event just a little – something they’ve not done in the years since it happened due to Brant working in Boise and Stevie kicking around a bit before returning to her hometown. There’s also the fact that she tries to stay away from him including one infamous time she crossed the street to avoid him. As Stevie discovers, more of the town is aware of that than she imagined. She was also worried that any confrontation between them might put her friendship with Kara at risk and Stevie never wanted that to happen.

There are no fireworks, no tantrums, no snits, no childish attempts to get the best of the other. Nor is this romance trope something they’ve apparently dwelt on for the past thirteen years. Stevie was even engaged at one point before realizing that it wasn’t right. There are reasons in her background for calling it off that up until now, she hasn’t wanted to acknowledge or examine too closely.

When she and Brant begin talking, his old concerns and why he reacted as strongly as he did also surface. And Stevie understands them in a way she didn’t then. They make sense to her while he sees how much he was overwhelmed trying to be both parents to his younger sister while also staying in college and that this was a major factor influencing how he acted. With the air cleared, they talk some more and begin to get to know each other.

Brant could never have pictured himself learning what tulle is as his plans to turn the family Christmas tree farm into an event place included having renters supply everything but he finds first Stevie’s suggestions and then those of an older family friend surprisingly helpful. Who would have thought old Milt would be all over Pinterest? Or that Stevie would be as excited as Brant to learn how to hitch and drive a neighbor’s sleigh to deliver the bride to the ceremony? This wedding might just come together after all. But will a Labrador Retriever come from behind and knock everyone flat before they work out their growing feelings?

There are so many ways that this could have tripped and staggered down Romance Trope Lane but didn’t. Each time I thought “here it comes” it didn’t go there. Over the course of the book, I had perked up when these things didn’t occur and as it rounded the turn for home, I was holding my breath and mentally pleading “please don’t crash and burn down the homestretch.” The final conflicts didn’t come from nowhere, the family didn’t get obnoxiously pushy into Brant and Stevie’s business, and the two of them make decisions not only for love but also for themselves, too. I finished the book elated that I had another A grade book to add to my Best of 2020 list and looking forward to the next one in the series. Yep, this is why I need to read more of your books. A-