REVIEW: The Expert’s Guide to Driving A Man Wild by Jessica Clare 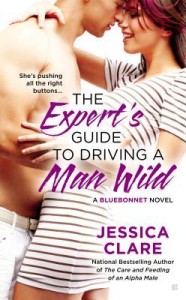 I confess I have the earlier Bluebonnet books on my TBR but haven’t got to them yet.  I read reviews of the first one in particular and it sounded like such fun, I was happy to get the chance to review The Expert’s Guide to Driving a Man Wild.  And fun is pretty much what I got with it.  Brenna is a vivacious and unusual and wild and Grant is uptight and controlling.  They strike sparks off each other (I suspect these were first introduced in the earlier books) – Brenna loves to push Grant’s buttons and Grant never fails to give her the reaction she wants.

I admit to being just a little bit lost at the start of this book.  I think it stands alone well but I also found that it seemed to assume background knowledge of Wilderness Survival Expeditions.  I’ll save readers the time I spent looking up a couple of reviews on the earlier books so I could work out who was who.  Friends Dane, Colt and Grant started a adventure/training/guide company, Wilderness Survival Expeditions, situated just outside of Bluebonnet, Texas, where they all grew up.  Dane and Colt spent some time together in Alaska and there they met Brenna.  When they started the company (I gather Grant is the money man), Brenna moved with Dane and Colt and became the company admin assistant.  Dane’s romance is the subject of the first book (The Girl’s Guide to (Man)Hunting – with Miranda as heroine) and Colt’s is the second (The Care and Feeding of an Alpha Male – where Beth Ann is the heroine). That’s really all one needs to know to follow the story.  If a reader has that background, the book works well as a stand alone.  I think new readers who, like me, enjoyed TEGTDAMW, will probably be enticed to read the other books in the series actually.  I know I was.

The tone was set very early on – it’s a flirty, funny, sexy book where, for the most part, serious subjects are not on view.  When they do appear (later in the book) they are treated with care and sensitivity but mostly the book doesn’t take itself very seriously.

Brenna is possibly the world’s worst assistant.  She spends a lot of time watching You Tube videos instead of working, she hires a new guy with absolutely no qualifications or reference checking (and I’m not even sure she had any authority to hire him in the first place), she wears whatever she likes – including Spongebob boxers – to work and has a generally lax attitude to her employment.

She tilted her head, studying him. “Why wouldn’t it be?”

He glanced down at her clothing. “You’re not dressed, your boss doesn’t know anything about me, and neither do those two guys. You barely looked at my résumé, and you haven’t asked me anything about my work experience. Just seems a bit strange to me.”

“I’m a strange girl,” she said lightly. “And listen, we run a survival school. Dane and Colt run the classes, Grant rides everyone’s asses, and I basically file paperwork and takepictures. They’re opening a paintball course, so we can put you in charge of that. I don’t see what the big deal is. You want to work here, right?”

“Well, we need another employee,” she told him.

He nodded, but the suspicious look was still on his face.

“Would you feel better if I put on some pants?”

I’m sure she must do something from time to time but it was never really specified in the book.   Recently, the company has taken on “Pop”, Colt’s dad, as handyman.  One of Brenna’s jobs, which she undertakes with great relish, is to break things for Pop to fix – they don’t have enough work to keep him busy and he is too proud to take charity.  Most often this seems to take the form of disabling Grant’s car – it’s like a twofer.

When Grant’s parents come to visit (along with his very shy sister Elise), Grant knows that he will be under a lot of pressure from them to date someone.  His wife died five years earlier and his mother in particular is set on finding him a new one, convinced he has been alone too long.  When Brenna witnesses the beginning of this pressure, she has a surprising reaction.

She identifies herself as Grant’s girlfriend and he finds himself agreeing to a pretend relationship with Brenna to keep the parents off his back, almost without realising it. For Brenna, it is also an opportunity to bug Grant in a thousand new ways. Bonus.

An idea struck, and she gave Justine a little smile. “I guess this ruins the surprise, then.”

Brenna turned and put her hands on Grant’s collar, tugging him down and kissing him full on the mouth. She turned back to Justine, Reggie, and Elise. “Grant didn’t want to tell you guys until after dinner. He likes to keep people guessing“

“He does?” Elise asked, clearly shocked as her gaze flipped between Brenna and Grant and then back to Brenna.

She glanced up at Grant, but he was still standing there, his mouth slightly agape, staring down at her. She leaned up and bit his lower lip, tugging on it in a sensual move of
ownership. “So shy. It’s adorable.” She looked over at Justine and smiled again, this time a genuine smile since she now had the upper hand. “That’s why you can’t invite this girl. She’s just going to see me and my boo being affectionate all night.”

And just to make her words have punch, Brenna gave Grant a slap on the ass.

When Elise needs to stay at the lodge because of flooding in her room, Brenna stays with Grant (it makes sense in the book) and they end up having sex.  Great sex. Wild, hot, sweaty sex.  The best sex either of them has ever had.

As much fun as I had reading the book, there were some things to note which made it a bit of a different experience from the norm.  Brenna is the sexual aggressor in the story.  It is her idea to have sex.  She has no trouble in asking for it (quite explicitly in fact – something which Grant finds he loves) and she has no body shame or sexual shame.  The book isn’t slut shaming either.  And, as uptight as Grant could be, that was one place he never went.  It is also Brenna who is the commitment phobic one in the relationship. Brenna insists it is no-strings sex.  Grant is the one who is ready for her to move in with him permanently in (literally) a day.  Brenna is the one who freaks out. (I didn’t blame her – dude it was one day.)  Brenna doesn’t like “stuff” and relationships are “stuff”.  She leads a very spartan existence – she prefers to borrow things rather than have her own “stuff” – because the original owners will eventually want their things back.  The reason for this isn’t explained until quite late in the piece but for some reason I didn’t find it frustrating.  I was prepared to go along for the ride and enjoy the fun.

Grant is no doormat and his controlling nature is explained later in the story too.  Grant’s wife was no saint but I appreciated how Grant’s feelings for her were complicated and included love, no matter what had gone on between them. I didn’t feel it was a case of the dead wife being demonised, but rather it was more about how they were just wrong for each other.  I suppose other readers may feel differently, but I thought the treatment of the first marriage was rather well done actually. It wasn’t perfect and it wasn’t entirely awful.  I got the impression that Grant used to be a bit of a doormat but his first marriage had worked that out of him I think. He’s learned how to speak up for himself and what he wants in healthy ways but he is still the man who is loyal and happy to be committed to one woman.

The book has a lot of sex in it. I didn’t mind that – it was inventive and fun and there was a certain celebratory tone to it – Brenna is a sensual woman and unashamed and Grant takes great delight in this.  She certainly knows how to loosen him up.  I suppose one or two of the sex scenes could have been cut without disturbing the story arc but really, I was having so much fun I didn’t mind.

As much as I am normally a hero-centric reader (and I did like Grant), I felt like this was very much Brenna’s book.  I suspect the level of enjoyment a reader will find will have to do with how much one likes Brenna.  I thought she’d be huge fun to hang around with – she’s almost my polar opposite but she’s not unkind or thoughtless.

The banter between the men felt authentic to me, the friendship Dane, Colt and Brenna clearly felt for each other, likewise.  And there was even some female bonding between Miranda, Beth Ann, Elise and Brenna which rounded out the characters and the story, as well as setting up the next book (featuring the new guy, Rome, and Elise) in ways which weren’t intrusive.

But for me, the book was mostly about Brenna.  She was an outrageous breath of fresh air and I think she and Grant will be very happy together even if he mostly won’t ever know if he’s coming or going where she’s concerned.

Beth Ann gave Brenna an amused look. “Since when did wild and careless Brenna start caring about business responsibilities?”

“Since I started sleeping with Grant,” Brenna told her wryly. “Trust me, I’m as disturbed by it as you are. It’s a good thing the man eats a fierce pussy, or he wouldn’t be worth it.”

Both Miranda and Beth Ann groaned as if in pain.

Grade: B, edging perilously close to a B+.