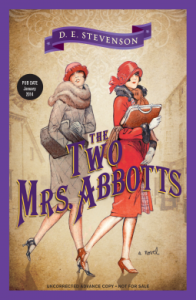 Another hilarious tale of misadventure with the beloved Miss Buncle!

The third book in D.E. Stevenson’s beloved Miss Buncle series, The Two Mrs. Abbotts takes us back to the delightful English town of Wandlebury, where Barbara Abbott (formerly Buncle) has her hands full raising two children in the midst of World War II along with keeping an eye on her niece, Jerry Abbott. Of course, Barbara isn’t too busy to observe her neighbors’ lives, and her curiosity and tendency toward matchmaking leads her into some sticky situations. Readers will enjoy the new characters and hilarious social situations in the latest Buncle adventure.

As the blurb promises, this is the third in this series of books by the late D.E. Stevenson. I will offer that in my opinion, the book focuses mainly on the second Mrs. Abbot – who is married to the nephew of Barbara’s husband – rather than on Barbara herself. In fact a greater part of the book doesn’t feature Barbara at all, which I missed as she is such a delightful person.

But there is an unexpected appearance by a character from book one, “Miss Buncle’s Book” and I enjoyed it almost as much as Barbara does. It helps to tie the series together a bit and offers some insight into the people Barbara left behind when she did a runner after her identity got blown.

As with the second book “Miss Buncle Married,” there is an emphasis on the changes going on through England at the time. And here it’s all about WWII. The rations, the blackout, the evacuees from the bombs of London, the difficulty in getting men to work on farms, the feelings of men who were deemed of more use working those farms rather than fighting but who wrestled with their consciences nonetheless, the potential of spies on the loose and soldiers quartered in homes and estates all over the country. The fading remnants of the “upper class with servants” lifestyle is still hanging on but there are signs of the social changes that were still to come. I did have some issues with the way the lower classes were portrayed, especially the evacuees from London, as dirty, slovenly and untrustworthy. But this appears to be common in books written in this era.

One thing I loved is that a major character is Miss Marks – former governess to Jerry Abbott – who is lovingly known as Markie. Markie is an intelligent woman who has found her place of older age and who delights in being useful. It is she who integrates the young soldiers who are staying on the property into life at Ganthorne – well she is used to getting young women to do what she wants – and who gently but firmly guides a young woman in a crisis. With Markie giving you pointers, you can’t go wrong in life. It’s also Markie who is the heroine of the day when her astute observations nab the very person the soldiers have been looking for.

There is a romance that is sweet and charming featuring one character whom I frankly didn’t care for from the second book. In fact I called him an ass. Here over the course of 6 years he’s changed and much for the better. I guess every character deserves another chance and his added responsibilities have been the making of him. Now if he can only fend off his sister’s helpful, if meddlesome, attempts to marry him off while he conducts his own courtship of the lovely woman who has caught his eye, all will be well in Wandlebury. Poor thing has the added burden that his lady love is a romance author who has had her book heroes pinch all the best places and times to propose so Archie will have to use his ingenuity to come up with something Different and Unique. Suffice it to say that he does.

Barbara is still taking a keen interest in those around her and her eagerness to please almost leads her into a sticky situation as the blurb says. However she’s also grown in confidence over the years and settled comfortably into married life and motherhood. All in all, I enjoyed this book better than the last though “Miss Buncle” still remains my favorite. B