In the Fast Track series, boosk 1 through 3 were my favorite. There was just the right balance of sexy fun for me. The middle of the series veered away from what drew me in but I felt Full Throttle returned in tempo and tone to those original books.

Shawn Hamby has been friends with Eve Monroe-Ford, a stock car driver, since they were kids. As adults they participate in a book club which is really a front for four friends to get together and do crazy stuff. This time they visit a fetish club in Charlotte where she gets invited to dance by a confident and sexy man named “Rhett.” Shawn thinks his name is made up and tells him that she’s Scarlett. The two have a connection but Shawn is drawn away by one of her book club friends. Outside the club an embarrassed Eve confesses that Shawn was dancing with Eve’s younger brother in law.

“That guy’s name is really Rhett?” she asked in amazement. Now she felt like a jerk for doubting it. “I thought he was making that up!”

“No, it’s really his name. He’s twenty-five years old and he’s in a sex club. Oh, my God, how am I going to look him in the face?”

“Twenty-five?” Shawn squawked, horrified. “Good Lord, he’s a fetus!” Who she had been contemplating pursuing so she could get a serious look at him naked. Her cheeks burned. “He looked older than twenty-five. He looked too hot to be that young. And I thought Nolan’s little brother was well, little. It never, ever occurred to me that the fake Rhett could be the real Rhett. You always talk about him like he’s seventeen.”

“To me, he might as well be. He’s Nolan’s little brother! What the hell was he doing there?” Eve asked, pulling out of the parking lot.

Oh, Shawn had a funny feeling she knew exactly what he was looking for. She might not be particularly knowledgeable about the lifestyle, but she could pick up on a clue or two. “I think he was a Dom looking for a submissive,” she said, not at all sure how she felt about any of this. 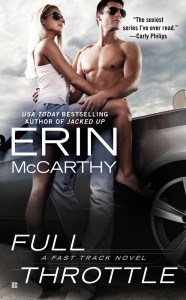 The setup is clear. Rhett (his real name) is interested in Shawn, an older woman. Giving him a BDSM interest makes perfect sense in the book because it explains one of the reasons that he’s attracted to Shawn. Younger woman are often scared off by his seriousness. Rhett works on Eve’s pit crew and is interested in dirt track racing. Conveniently Shawn owns a classic racing track.  The problem is that she’ll lose ownership of the race track if she doesn’t marry. Yes, this is a *will* book and usually I hate these. Fortunately I felt like it was handled in the best way possible. The marriage of convenience places the couple together in close proximity but they agree to have sex because, well, they are attracted to each other.

I thought making Rhett the serious soul who enjoyed a less mainstream sexual lifestyle was smart when pairing him up with Shawn. The difference in their ages (she is thirty-two to his twenty-five) shrank because of his seriousness and his command in the bedroom. Rhett had no problem dropping that role outside the bedroom and was, in fact, written to be more comfortable at some of the domestic arrangements than Shawn which was a nice role reversal.  Shawn was more impulsive, deciding on a whim to propose to Rhett or suggesting that her book club go to a fetish club. And she was also more attracted to the absurd. The pairing worked for me.

And there was something very normal about their interaction. The first morning after, Shawn felt very uncomfortable and wasn’t at all unhappy Rhett had to leave to go to work even though the night before had been incredible. When his mom shows up, she immediately goes toward Shawn’s petite blonde friend and says “Oh, you’re just too cute. Exactly Rhett’s type” and when the mother is pointed toward Shawn quips “Of course, he didn’t marry any of those girls, did he?”

There is almost too little conflict in the story and what was there was easily resolved.  Shawn is the one that tries keeps Rhett at arm’s length and the story focuses a great deal on their relationship inside the bedroom as much as outside. Still, it was a sexy, normal adult romance with really smoking hot love scenes. I appreciated the humor and I liked both Shawn and Rhett.  B-