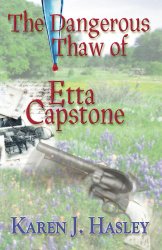 For most people food serves a purpose and the purpose isn’t complicated. You eat it. But for Etta Capstone it’s not that simple. An excellent cook and the owner of a successful restaurant on the Texas frontier, she’s had years to perfect other uses for food besides the obvious. Food as shield. As wall. As love letter. As peace offering. Food as life—well, half a life, anyway.

Etta’s not like other women. She’s been frozen in the past, frozen heart and soul for a long time, captive to memories of unbearable violence. Until suddenly, with the sighting of the man she holds responsible for her painful history, Etta begins to consider the possibility of a more satisfying future. She knows that with a good cooking fire and the steady heat of a patient man’s love, a lot of things are possible—even change, even happiness—and to her way of thinking, all that stands in the way of a bright future is one wicked man, one necessary execution, and lessons in good penmanship.

So as a woman used to creating dishes from diverse and rare ingredients, Etta concocts a deadly recipe using just those elements. She knows better than most that life offers few guarantees, and if all it takes to free her from the past is one wicked man, one necessary execution, and lessons in good penmanship, she’ll take the risk and make the effort, no matter who gets burned. Because after years of keeping the fires of love and the warmth of hope at a distance, Etta Capstone is finally ready to thaw.

I bought this book years ago when I first started reading your novels. But from the blurb it was fairly easy to tell that this would be an intense story and I’d need to be in the correct mood for it. Well, it is and I needed to be and finally felt it the time to dive into it. I should include FAIR WARNING that the book should probably not be read by anyone with violence triggers especially any for violence against women. Though what happened to Etta, her family and another in her care occurred years ago and isn’t shown or described in any type of flashback, it is (at first obliquely and then a bit more clearly) referred to throughout the story and there is no doubt about what Etta suffered.

Etta has been emotionally frozen for seven years, ever since she and her young charge Sissy escaped from the camp of bandits who had made life on the Texas border hell for those living there. Nine years ago, Etta’s life had been destroyed in less than 24 hours and now she alone from her family is alive. After the Texas Rangers attacked the bandits, she, Sissy – another tormented one with a mysterious past who retreats to her childhood to block out memories Etta can guess only too well, along with Juana and Miguel who helped them during their escape and paid the price for it, have established new lives in the small east Texas town of Compassion. Etta might have been willing to continue with her half life until she caught a glimpse of the man who caused her grief and pain.

Even after seeing this man, Etta still had only a hazy plan for what she wanted to do to see justice done. Stopping to glance through the window of the town saloon, Etta discovers a person who just might be able to assist her. After careful consideration and planning, Etta gets him to agree to help her in exchange for her teaching him – polishing his skills as Etta phrases it – to write properly. To her credit, she lays it out and tells Clyde Renfro exactly what she needs from him and why.

But Etta has to keep all this from Juana and Miguel – no easy task as Juana and she know each other too well to hide much, as well as the Texas Ranger who helped save Etta and who, Juana acerbically tells Etta, has loved Etta for years. Harmon Drake is a lawman and good at what he does so Etta can’t mess up and reveal any clues or Harmon will start to put them together for sure. Will Etta’s plan to lure her nemesis into the crosshairs of her revenge work? And is she willing to pay a price that grows steeper the longer it takes to finish the job?

The main plot points of the story are revealed fairly early and I wondered if and how my interest would be held until the end of the book. Turns out by the end, I didn’t want the story to finish. While I knew what Etta planned, the reasons are delicately and gradually shaded in. It’s clear that Etta has suffered terrible losses and personal pain, but waiting for the whole story made the impact that much more intense. The tension is allowed to grow, reigned back some, heightened more, allowed to simmer then strikes as Etta’s plan reaches fruition. Of course it doesn’t come off quite as planned but then whatever does?

In the meanwhile, Etta watches as the villain begins to respond then plays a cat and mouse game to bring him out into the open. We also see her question what she’s doing, fear that she might have exposed those she loves to further suffering and explore why she can’t let the past be the past and move forward with her life. Sometimes she ignores the sound advice of others but Etta is a woman who has been waiting a long time with her pain and when she sees the chance to exact vengeance, she stays set on her course. She finally realizes that it isn’t just for her but for those who suffered and died while she lived. Or for those who continue to suffer just because they were willing to try and help her when she needed it. Will the death of this man change her life for the better? Can she finally put some ghosts to rest and move on? She honestly isn’t sure.

Watching her wrestle with her conscience as well as defend her plans is an exercise in psychology. Seeing the man who loves her be wounded each time she pulls away and throws up her defenses is painful. Knowing that the rules and regulation with which she rigidly orders her life are a way to control dangers she realizes she really can’t control shows how what she endured has changed her forever. And no, even seven years later, it continues to haunt her and true love doesn’t completely cure all her fears.

Etta went through hell. In that experience, she was forged in fire and the person she was changed forever. When she decides she wants a man killed, she knows what she’s doing and it’s no spur of the moment decision. I was satisfied that her reasons were sound, thought out and had been considered. The execution of her plan changes her more but by the end of the book, Etta had thawed, had healed and as the epilogue showed had finally moved forward with her life, freed in at least a small way, from her past. B+