REVIEW: The One You Can’t Forget by Roni Loren 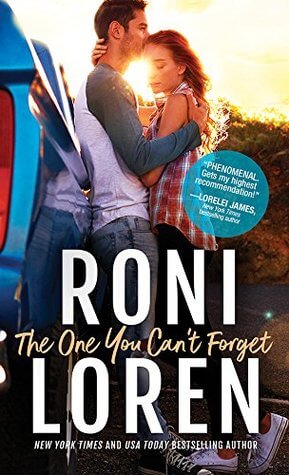 The One You Can’t Forget is the second book in your The Ones Who Got Away series. I reviewed the first book here in January. I think this book is stronger, partly because it did not have to do the heavy lifting of setting up the series, which is based around a group of women who survived a high school shooting. However, I ended up with the same grade because there were a couple things which I couldn’t let slide altogether (and for some may well be a dealbreaker).

Rebecca Lindt is a divorce attorney in Texas. She was shot in the leg during the shooting at the Long Acre High School and it is clear from the earlier book that she has some guilt over something to do with the shooting. (The book stands alone fairly well but more information about what happened is found in the first book and some knowledge is assumed. I don’t think it is absolutely essential to know it to enjoy or understand this book however.) She had an unrequited crush on her best friend, who was in love with someone else (they got their HEA in book one) and between that, her guilt over the shooting and her work which is all about the breakdown of relationships, she has sworn off any kind of commitment for herself. She is buttoned-up and controlled, but things are starting to slip a little. She is having flashbacks and panic attacks about the shooting, which have been occurring since a documentary about it was filmed and aired. One good thing came out of the documentary however, she reconnected with the group of women who were all in a support group in high school after the shooting and they keep in regular contact now.

Wesley Garrett is a chef whose current role is teaching cooking at-risk teens in an after-school program. He had been about to open his own restaurant when his then-wife, Brittany, filed for divorce. Rebecca represented Brittany in the divorce and did very well for her client. As a result, Wes lost his restaurant and had to file for bankruptcy and subsequently became an alcoholic. He has been sober for some time and is getting his life back together, slowly. Wes’s childhood was not very happy. Both of his parents were drug addicts. After his father went to prison, Wes was taken in by his uncle and aunt and his life got much better. The work he is doing now with the young people at the school is close to his heart therefor.

One night after work, Rebecca is mugged while walking home alone. A stray dog comes to her rescue but is shot by one of the muggers and Wes then comes onto the scene and assists both Rebecca and the dog.  They take the dog to the vet (the police take a statement from them both while they’re there) and after, they end up getting some food and Wes takes her home. Rebecca’s purse and house keys were stolen in the robbery and she is concerned to go home alone. Wes does not at first recognise Rebecca and for the first time since his life imploded, he feels a spark of romantic interest. Rebecca is self-sufficient and hates being vulnerable but Wes is having none of it.

“Nothing to be sorry about.”

She followed him out, her legs feeling a little steadier beneath her but her muscles still tingling with adrenaline. “I know. I just hate acting like some damsel in distress. I’m usually more together than this and—”

“Hey, stop, all right?” he said, breaking into her rambling. “You damsel however you damn well please. No one’s grading you on How to React after Being Robbed. You’ve had a hell of a night.”

Both main characters are at pivotal points in their lives, but it is perhaps more obvious with Rebecca. She is shaken out of her ‘comfort zone’ and suddenly everything looks different.

She held everything so tight and close—her feelings, her desires, her fears—that she was used to people layering their ideas about who she was on her like a costume. At work, she was the aggressive, confident lawyer. To her father’s friends, she was the studious, obedient daughter. To her friends, she was the practical, unemotional one. She was all those things and none of them, but those masks gave her a comfortable place to settle, a role she knew how to play. With Wes, she couldn’t find her footing or her lines, so blatant honesty slipped out instead.

It made sense to me that as things unraveled she actually became free and it was obvious that who she was with Wes was the real Rebecca, even if it took her a while to realise it herself. It takes Wes a little while to find his own confidence but once he does, he realises he sees Rebecca, possibly more clearly than she does.

“I think you’ve just been fooling everyone else with the uptight routine.”

The mocking in her voice was hard to miss.

“That’s what people say, huh?” He pinched her nipple, eliciting a sharp gasp from her. “Well, they’re not looking hard enough. Because I felt it when you kissed me that first night. You’re all fire, Bec. You’ve just figured out clever ways to bank it. But you can’t hide it from me.”

Apart from the very early stages of the book, Rebecca sees Wes pretty clearly too. While it was always Wes’s dream to open a restaurant, she sees that the work he is doing with the teens is important and valuable. It is Rebecca who comes up with the idea to combine the two things in a unique way and it was easy to see how it could work in the long term for him and for the kids in the program.

The teens in the program also have a significant part to play in the story as well, particularly a young man by the name of Steven.

The ending of the book was maybe a little abrupt and exactly how things were sorted (or how easily) wasn’t quite specified in some respects but I believed in the HEA and I believed that both Wes and Rebecca were better off in all other aspects of their lives too, not just romantically. I liked Wes and the way he was prepared to take emotional risks.

I also enjoyed the humour and banter between them. There’s a section where they’re emailing each other and it’s flirty and charming and fun. Wes isn’t intimidated by Rebecca’s competence or skill and he likes the way she calls things how she sees them. Their differences compliment each other but they find more in common than either originally thought they would.

Rebecca’s “guilty secret” regarding the shooting is eventually revealed. I thought you handled it well, first explaining, believably, why Rebecca was so guilty and ashamed and then, equally believably, explaining why she was being unfair on herself. I also appreciated that the power of true love didn’t fix all Rebecca’s issues – she was seeing a therapist and getting help.

Now, to the things which bothered me.

There is a bit in the book where police officers allow Rebecca to keep some photos for the purposes of suspect identification and to show them to Wes. I can’t imagine this is proper process. Most of what I know about the US criminal justice system comes from Law & Order but it seems to me that a halfway reasonable defense attorney would be able to get any ID made by Wes based on pictures shown to him first by Rebecca, thrown out of court. (I checked this with a US lawyer-friend on Twitter and it appears my concerns are well-founded.)

More importantly, when the book begins, Rebecca is at a mediation conference with a client. When the mediator and the other parties are temporarily out of the room, Rebecca looks in the opposing counsel’s file. There is no narrative pushback for this. This is completely unethical and so not okay I expect any lawyer reading the story might put the book down and read no further. Rebecca never gets called out for this behaviour. She experiences no negative consequence for it. The opposite in fact.  My eyebrows went up even further because she is initially pretty scathing about Wes because she sees him as a “cheater”. (He wasn’t a cheater as it happens.) What Rebecca did was in fact cheating. But she had no insight into this. I have a legal-adjacent background. I was appalled. Additionally, there was no good reason for her actions from a story perspective. The information she obtained could easily have come direct from her client. In the scope of the entire book, it was a little thing. But ethics matter and it bugged me. A lot.

If Rebecca had behaved ethically at the start, I’d probably have rated the story a B+. As it is, I’m going with a B.