REVIEW: Round Midnight by Emma Barry and Genevieve Turner 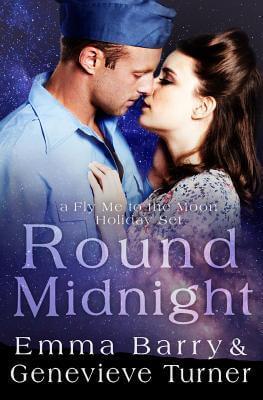 Frances Dumfries is the perfect admiral’s daughter. She runs the household, hosts the parties, and never falls for the midshipmen surrounding her. Having fun or putting herself first is definitely not on her schedule. And she doesn’t want anyone—particularly not a man too handsome and kind for his own good—to point that out.

Midshipman Joe Reynolds sympathizes: ever since he tumbled headlong into love with Frances, life hasn’t been much fun. With only so much time until he ships out from the Naval Academy, he’s racing the clock, and her refusal to give him a second look, to secure her affection. But this sailor isn’t surrendering in the campaign to win her heart.

Torn between duty and selfishness, it will take a Christmas miracle to show Frances and Joe that love is rare, precious… and worth fighting for.

New Year’s Eve is a night for old friends, new hopes, and champagne dreams—and Betty Parrish intends to take full advantage. But when her long-term beau makes one too many arrogant comments, she throws him out. After all, who needs men?

Greg Henkins’s New Year’s plans involve tools and engines, not dances and debutantes. But when the vivacious Betty runs into him, his night ends up head over heels. After all, who could resist a midnight kiss?

Greg and Betty are intoxicated by what they share at midnight, but will their budding relationship wilt in the sober light of morning?

When you contacted us about reviewing your bonus 2016 novella, I zipped clicked a response of “Yes, Please!” Since I’d already read and reviewed “A Midnight Clear” close to this time last year, I could skip straight on to the new addition. Well, after a refresh on the strip poker wedding night that finished up the first novella.

Ohio transplant Greg Henkins is a man who says what he means and means what he says. The Alabama Southern style of meandering around with an answer in order to “be nice” baffles him. So when he tells his little sister that he’d rather spend New Years Eve working on an engine, which are straight forward and easy to understand, rather than take her to a dance in order to see her BFF finally get a proposal of marriage, he’s not joking. Still he loves his sister and ends up caving.

Betty Parrish’s family isn’t Huntsville elite so she’s been carefully nursing society beau Fenton along for two years. Tonight ought to be the night he proposes but when he thoughtlessly insults her family one too many times, she cuts him loose and feels liberated. She’s not, however, going to let him be the only one to present his side of the breakup at the dance. After announcing her own version of the events, she turns and runs smack into her friend’s older brother – the one Betty’s always thought of as a stick-in-the-mud. Greg helps her out and fetches some champagne and the two end up talking for hours before an intense ring-in-the-New-Year kiss.

They both feel something but when Greg compliments Betty as Fenton should have and then asks her to wait for him to graduate from West Point, she worries that in the light of day, the magic will all fade back to her normal of “stuck in Alabama with no prospects of ever getting out” much less that this man who she’s beginning to see is totally serious about what he says will be faithful to her. Could her dreams possibly come true? Meanwhile Greg sweats out his train departure back to the Point afraid that Betty won’t appear much less agree to only be able to write him.

This is a quick jolt straight from barely acquainted to “will you wait for me?” But there are signs of promise there from the beginning despite the fact that things initially don’t go smoothly after Betty and Greg’s run-in. Greg’s manners and forthright statements throw a woman used to a slime ball’s sleaze but the way he acts and speaks – even if they start off annoying her a little – point to his truthfulness and reliability. Gregg isn’t sure of who Betty is for a while as she switches from the Amazon who boldly took command of the disastrous non-proposal to the person who hesitates to show who she truly is. As they talk and get to know who the other is, her mask slips away. But it’s painful to risk your unprotected self so her willingness to risk her heart with Gregg – via letters and phone calls – speaks volumes. I also find myself charmed by Gregg’s way of saying the most romantic things with total unselfconsciousness but, as Betty now knows is the truth, the utmost rock solidness. I hope he can take her to her dream destination of Egypt one day. B+

Out the window Betty could see a perfect field of clouds, stained pink and gold by the sun. It stretched toward the horizon in every direction and was capped by a perfect dome of blue sky. She gasped and pressed against the glass, taking it all in.
“That’s… absolutely gorgeous. It’s like heaven. You get to see this every day? How do you stand it?”
“I know.”
But when Betty tore her eyes away from the window, Greg wasn’t looking out the window; he was watching her.
Her cheeks heated. “You, Greg Henkins, are a flatterer.”
He only shook his head slowly, and the sincerity in his face belied her words.