REVIEW: Round Midnight (aka A Midnight Clear) by Emma Barry and Genevieve Turner 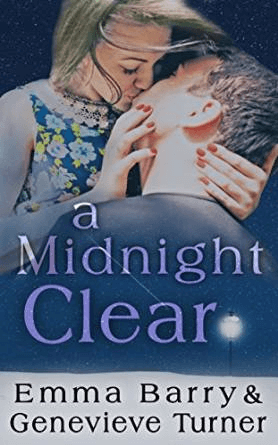 Frances Dumfries is the perfect admiral’s daughter. She runs the household, hosts the parties, and never falls for the midshipmen surrounding her. Having fun or putting herself first is definitely not on her schedule. And she doesn’t want anyone—particularly not a man too handsome and kind for his own good—to point that out.

Midshipman Joe Reynolds sympathizes: ever since he tumbled headlong into love with Frances, life hasn’t been much fun. With only so much time until he ships out from the Naval Academy, he’s racing the clock, and her refusal to give him a second look, to secure her affection. But this sailor isn’t surrendering in the campaign to win her heart.

Torn between duty and selfishness, it will take a Christmas miracle to show Frances and Joe that love is rare, precious… and worth fighting for.

Those who have read your novel “Star Dust,” will recognize Frances and Joe and know how their romance turned out. Well, since this is a romance novella it’s easy to guess that anyway but it’s nice to get the background story on the couple who are still so devoted to each other 14 years later.

Frances is a world weary daughter of an admiral who takes no shit from anyone and who can outface any determined midshipman trying to weasel his way into her father’s graces. Except one and it would hurt too much if he were to turn out to be just like all the others she’s shown off with polite but steely dismissal. So Frances verbally slays him to her younger sister. Poor closet romantic Joe, who thinks he might be in love at first sight and that love feels awfully like a head cold, achy, feverish and sweaty – doesn’t know what to do next. His Veronica Lake-ish dream woman not only won’t go out with him, she won’t even speak or look at him. Joe’s not about to give up the ship, so he and his roommate Steven begin to work out a tactical plan which includes knowing your enemy followed by recon. They are training to be Naval officers after all.

Quest underway, Joe goes in hot pursuit. Frances is impressed that he’s very obviously yearning but for what she isn’t sure – her or her father’s influence. Poor sap also doesn’t know that Frances doesn’t want a Navy man. She’s had a lifetime of those as well as watching her mother put her life on hold for her father and all the politicking and maneuvering of a Navy career. Joe might be nice as well as persistent but Frances is not interested despite how her breathing shallows out and her heart races when he’s near.

Joe isn’t giving up, no sirree, bob. This is a Quest, after all and Joe has Not Yet Begun to Fight. Joe pulls out a few more stops and brings a new ally into the game. The conditions for helping him are fair but the mission sounds daunting. How to make Frances happy when she’s never had a chance to be? It’s Damn the Torpedoes and Full Speed Ahead until Frances gets a shot in below the waterline. Well if she doesn’t want to be a Navy wife, Joe will help her discover what she does like. He’s too afraid of her sister not to fulfill the vow he made in return for Suzanne’s assistance. Suzanne might only be 15 but she’s feisty.

With dogged determination, Joe keeps at it. Little by little, he begins to win Frances over though winning her father to the plan will take some doing. Then things get interesting when his duty comes into conflict with his promises. I like that these two are faced with this dilemma as both are looking at a service lifetime of it should they marry. If they can’t examine and come to terms with their fears and hesitations now, a future between them won’t work.

Joe’s proposal – complete with an audience – is about as good as it gets.

She looked down at him, into those brown eyes filled with gentle promises and she forgot everything else.

“Sweetheart, I can’t promise I’ll come home. I was wrong to before. I can’t abandon the commitment I’ve made to the Navy. But I can tell you I love you. And I know when two people love each other they ought to be together. Not because it’ll be easy, but because not being together would be too hard. What we have is special, special enough that I hope we get to share it for a hundred years, a thousand. But I want that time with you, however long or short it is, because you’re the love of my life. And I’m the love of yours.”

Frances inhaled. It was true. It was true. She knew it in the way she knew gravity was real or the dawn would come. She didn’t know a time when she hadn’t known it. Joe loved her.

Joe shifted on his knees. “I know I’m asking you to sacrifice too. And I know this might not be the life you wanted. But it’s what we both seem called to do. And I’ll make the good days so good for you.”

Frances knew she was blushing wildly. Joe didn’t help matters when he squeezed her hands to confirm her assumption.

“Say yes, Frances Dumfries. Let me spend all the days I can making you happy.”

Across the room, she could hear Suzanne whisper, “That was pretty good.”

Yeah, I agree with her. That’s pretty darn good and the wedding night scene is even better. B