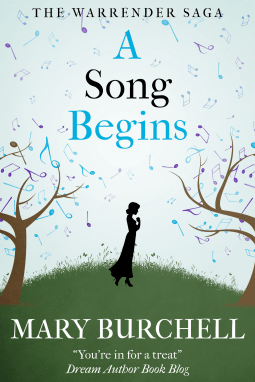 I first did a review of this book in 2009 after Sunita loaned it to me but at the time it wasn’t available in digital format. When I saw it was being rereleased, I first squeed with Sunita and then wanted to repost the review as more people can easily enjoy it now. Of all the books mentioned in the “Safe Passage” posts, I think this one garnered the most votes and fond recollections. After reading it, I can see why. The impact is that strong. For those who’ve not read it yet, I suggest that you proceed with caution in reading this review as the whole thing will be sort of spoilerish. I already knew the outcome of the book before I started and can only imagine how much more of a shock and delight the ending would have been if it had hit me broadside.

Anthea Benton is taken aback when her voice teacher informs her that Anthea is ready to move beyond anything Miss Sharon can teach her. But money is tight in the Benton household and the cost of Anthea moving to London and affording the kind of lessons which she needs to realize her gift of a voice is prohibitive.

So when her younger brother shows her a newspaper advert for a local contest with a £500 first prize (and remember this book was first published in 1965 when this was a shit load of money), Anthea realizes this could be the answer to her prayers. As she listens to the other contestants, she’s confident that even her fairly untrained voice is the best there.

And she would have won the contest if not for the odious Oscar Warrender. A last minute coup of a judge on the part of the contest supporters, the world class opera conductor is obviously the one who persuaded the other judges to award the prize to another person. Crushed, Anthea doesn’t hold back her disappointment and is only a little embarrassed that the great man himself overheard her view of him.

So when a letter arrives shortly afterwards announcing that Warrender wants her to appear in London to audition to be his student, Anthea is shocked. But not too shocked to realize that this is her big chance. As he tells her after she sings for him, she is to put herself totally in his hands, listen to what he tells her to do then, by God, DO IT.

It will be hard. It will be long. She will need every ounce of strength and intelligence she possesses to withstand the training and hard work to become an opera singer and not merely someone who can sing. If she is a good girl, and does what she’s told, and doesn’t do what she’s told not to do, then maybe, just maybe she will become a star. But will Anthea be able to keep from strangling Warrender on her way to a Covent Garden debut? And what else will she discover along the way?

This isn’t just a book about a young woman finding love. Lots of people can write those and write them well. Rather, it’s a book about a young woman finding herself and reaching for the operatic stars – and finding love along the way. As Warrender warns her, the road is rocky and strewn with boulders and obstacles. She has the voice, Warrender also tells her, somewhat grudgingly, but is she disciplined enough to make of it what can be made? Or will she be seduced by easy praise and flattering users who will casually allow her to ruin her voice as so many others have done?

Early on, Anthea hears something a famous soprano said of Warrender (to paraphrase): that sometimes she could cheerfully kill Oscar and then she’d be the chief mourner at his funeral. And that he can make anyone sing better than they think they ever could. Anthea learns these lessons herself and we watch her do battle with her temper after some cutting remark Oscar makes or some casually dismissive statement he utters. His praise is faint and rarely heard, his anger at a mistake is great and Anthea finds him a demanding bastard. Yet, she also admits that there is something about him that inspires greatness from his singers and she knows she’s damn lucky he’s taking the time to work with her.

Still she can’t help but get angry at him when he easily brushes aside the friendship Anthea shares with a young man from home. And when he throws down the gauntlet and makes her choose between singing and family, she almost breaks. It’s here that he utters the famous lines Barb Ferrar posted earlier –

“I’m sorry about your mother”-‘he did not sound in the least sorry-‘”but I presume the estimable Neil Prentiss has everything in hand, as you say. They must manage without you.”

“They must!” he shouted at her suddenly. “Great heavens, do you suppose we’ve worked to this point in order to let everything go? Don’t you understand even now what it means to be a professional artist? The performance comes first, last and all the time. Understand that now and for the whole of your future. Your entire family can be ill, your husband can have left you for another woman, your house can be on fire, but if you can get on the stage and do a great performance, YOU GO! Is that clear?”

At this point in the book, I was almost ready to bust Oscar myself. The nerve of the man! Her mother is ill and he’s demanding she make a choice. Only, as the story goes on, we find out…well, I won’t say but we see that Oscar isn’t a total shit without family feelings.

There’s another part of the book which also struck me. It’s said by Anthea’s London voice coach:

“I’m afraid he is probably a pretty hard taskmaster,” the other woman admitted. “But one day you will be glad of that, Anthea. This is almost the hardest life there is, if one does it properly, and perhaps someone has to be hard with us in the very beginning. Kind words and easy applause can come later. Not at the beginning.”

“I suppose you’re right.” Anthea sighed. “But he’s pretty beastly sometimes for no reason at all.”

“Possibly. All great artists live on their nerves, and seldom suffer fools gladly,” replied Enid Mountjoy bracingly. “The general public glibly refers to this as being temperamental. If you have the temperament to put on a great performance, it’s asking too much of you that you should go home afterwards and cook the lamb chops with your own little hands. Or, in the case of a man, make yourself tamely agreeable to all and sundry.”

And this is just so true of so many opera singers. We the general audience just get to sit there and listen but they are ruled by their voices and any little thing that could affect that with which they make their living. And Mary Burchell, aka Ida Cook, had known enough singers to have seen this. All these parts of the story are so convincing because she had watched singers burn out early and destroy what made them so briefly famous. As well, she had known the singers who were disciplined enough to take their time and slowly bring along their voices, thus allowing for a long career.

I doubt that many other authors could convey this lifestyle – both the singing and the conducting – as well as Burchell. She knew the singers and, in the person of Clemens Krauss – watch for his name in the book – she knew conductors. She also knew her opera and, as portrayed by Anthea’s fellow students, Burchell had experienced camping out for tickets to Covent Garden performances and the thrill of listening to a new voice. As Anthea knows she’s in the hands of a master conductor, I read this book knowing that Burchell was telling it like it was, and in some regards, probably still is.

This isn’t an easy road to romance book. You will have to be content with knowing that the payoff will be spectacular but also long in coming. Also, Oscar will come off as a total ass several times. However Anthea does stand up to him or realizes that what he’s ordering is best for her voice. Those who don’t want to wait that long will be best advised to skip this one. But those who want to see the hard work that goes into a truly fine operatic performance and are willing to sit tight for the “I love yous” are in for a treat. B+