Readers please note: If you haven’t read book one in this series, The Curse of Chalion, you may wish to avoid this review of book two, which contains spoilers for the earlier novel.

A week or two ago I finished reading the first book in your Chalion series, set in a fantasy world based on medieval Spain. Only rarely do I read books by the same author so close together, but soon after finishing The Curse of Chalion, I found myself craving more of the same world. 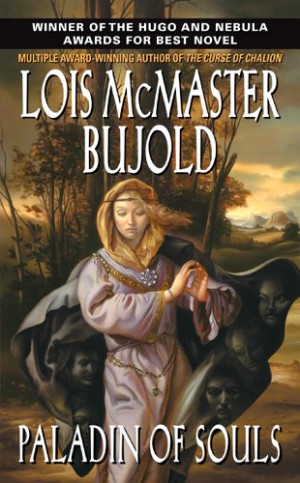 Paladin of Souls takes place three years after the events of The Curse of Chalion and its heroine is dowager royina Ista, whose role in the earlier book was considerably smaller. Nonetheless, Ista’s backstory in that first book makes quite an impression.

When she was only eighteen, Ista was married to Ias, Roya (King) of Chalion. Not only did Ista learn that her much older husband’s closest friend and chancellor was also his lover, she also discovered something even worse—that members of the royal family, herself and any children she might bear included, were horribly cursed.

This knowledge came to the pregnant Ista two years after her marriage, through visitations from one of the Chalionese gods, the Mother (Chalion’s is a family-based pantheon, including the Father, the Mother, the Son, the Daughter and the Bastard).

In her visitations from the Mother, Ista was granted second sight and told how the curse might be lifted, yet her misinterpretation of the goddess’s instructions resulted in the murder of her husband’s lover, Arvol dy Lutez, the eventual death of Roya Ias, and the worsening of the curse.

Twenty years have since passed, seventeen of which Ista spent in a fog of near-madness. Her second sight is now gone, as is her young son Teidez, who was taken by the curse. With the curse lifted three years ago (to find out how, read The Curse of Chalion), Ista’s daughter Iselle now sits on the throne, and Chalion thrives. Ista is no longer lost in her fog, but she is at loose ends.

Ista’s ladies in waiting and her late mother’s castle warder keep her in comfort and security, without realizing they are suffocating her. Most people think her mad or close to it, so Ista feels herself growing not only weaker and older, but less effective and more limited in agency.

All this begins to change when Ista leaves the castle and stumbles across a party of pilgrims. She’s been craving an escape from her well-meaning protectors, and she seizes on the idea of a pilgrimage as a pretext for leaving home. In this she is unexpectedly assisted by a confluence of circumstances that enable her to shed her keepers and acquire a lively party of her own.

With Liss, a young royal courier, serving as her lady-in-waiting, two brothers, Fox and Ferda, and the ten soldiers sent with them by her daughter’s chancellor to secure her journey, and a new clergyman, Learned dy Cabon, to help her pass off her getaway as a spiritual quest, Ista makes her bid for freedom. She does not foresee that her so-called pilgrimage will indeed become spiritual journey when the gods of Chalion once again come knocking at her door.

Long ago, in bitterness over the Mother’s unclear instructions which led her to commit a crime, Ista turned away from the gods. But the gods are determined to conscript her once more, and turning away again and again isn’t as simple or easy as she wishes.

From dy Cabon, Ista learns that an unusually high number of the Bastard’s demons are loose in the world, inhabiting the bodies of animals and occasionally people. She also dreams of a comatose stranger who lies in a chamber bleeding from the chest, a golden cord of magic extending out from him and across the room. In her dream the man pleads for her help, but once awake, Ista shuts her ears to his appeal.

Dy Cabon then approaches Ista, and reveals that he has been having odd dreams himself, dreams that feature her, and which began before their first meeting. In fact, he took charge of her pilgrimage in place of another member of the clergy because he believed he was called by his god to guide her.

Even in the face of this sign that her journey is the work of the deities, Ista refuses to cooperate with their wishes. Then a member of her party is possessed by a demon, and Ista begins to use her rusty ability to sense the spiritual. When the soldiers from the neighboring kingdom of Roknar attack her group, Ista does her best to protect those she can and hopes for rescue.

Rescue seems at first to appear, in the form of Arhys, March of Porifors, an uncommonly handsome nobleman who fights the Roknaris with courage and strength. Ista begins to think she is falling in love, but then she learns that Arhys is a member of the dy Lutez family, the youngest son of the man whose death and notoriety she and the gods are responsible for.

But like the gods, like Ista herself, Arhys isn’t exactly what he appears, as Ista discovers when she find him in his tent, dead to all appearances, bleeding from the chest much like the man of whom she dreamed. When he wakes Ista is left with multiple questions.

How can two men share the same wound? Who or what is responsible for their unnatural comas, and what is the connection between the men? Has one of them been sent to redeem or rescue Ista, or has Ista been sent to the aid of one of them?

Further, what are the Roknari soldiers doing in Chalion? Why are there so many demons loose in the kingdom? How can Ista protect the members of her party from these dangerous doings? Do the answers lie in listening to the gods’ instructions, and if so, can Ista trust the gods enough to do so again?

I thought this book had a more engaging beginning than The Curse of Chalion, but that may be because I already knew something of Ista from the earlier novel and had a stronger idea of what to expect from the storyline. Even so, the novel managed to surprise me more than a few times.

Ista is a wonderful character, wry and intelligent, with liking for most people but cynicism toward the gods. For this reason I thought she was a more fully believable character than Cazaril, who, though wonderful in his own way, was a little too good to seem entirely real.

I loved Ista’s arc, her journey from overprotected dowager royina to… something else altogether. She not only regains her faith, but also her faith in herself, her own power and agency. Her worldview alters, and she comes out not only on top, but equally importantly, in charge of her life.

For all that she thinks of herself as a dried up old prune, Ista also discovers that she is still capable of sexual attraction and romantic yearnings. Though I did get a little tired of the frequency with which she thought of herself as old at only age forty, I put this down partly to her being a member of a medieval society, and partly to a distortion in her sense of her own age due to all she had lived through. It lovely great to see her discover that she wasn’t as aged as she thought.

But while there is a romantic element to this novel, and a man who falls in love for Ista, that is only a subplot. The main plot deals with saving a community, but the novel could also be described as a different kind of love story, one between Ista and her guiding deity. Ista begins her relationship with this deity reluctant, but emerges not enthusiastic and triumphant. It was a fascinating dynamic; not always comfortable reading but compelling.

I liked the side characters a lot too, especially Liss and Learned dy Cabon, Arhys, and the man in Ista’s dreams. Another character, Cattilara, whose role in the novel involves a spoiler I won’t reveal, was irritating and immature.  She could have easily turned into a caricature, but she didn’t. The big bad of the novel could have been developed more, but even this was an interesting portrayal. The same could be said of more minor characters, too.

There is a big twist that comes in the middle of the book when we discover that a character isn’t at all what appearances indicate. I was warned about it in advance so I took it in stride, but if I hadn’t been, I might have reacted differently.

Paladin of Souls is a terrific fantasy novel, one I think most readers will enjoy. I certainly did, so I recommend it to others. For me, this one rates a B+.