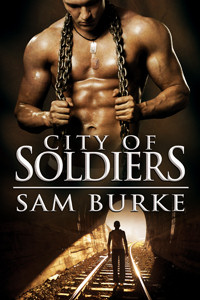 Sean Gordon returns from the war in Afghanistan with a bad leg, no job, and a heart grieving for lost friends. Lonely and searching, he’s interested in exploring his submissive side but can’t even tell his own family he’s gay. He’s unable to find a strong man to fulfill his deepest, most shameful fantasies and sees only a bleak, unhappy future.

Everything changes when he meets Roman Mahoney, part of a secret group of former soldiers who live in Philadelphia’s forgotten underground and protect an ancient secret. Roman is asexual and proud of it, but yearns for romance with a man who will tolerate the lingering effects of his head injuries and not pressure him for sex. He ends up emotionally caught between two dominating men—the disgraced veteran who cares for him and a Philly cop with a love of bondage. Slowly Sean and Roman begin to connect, adding fuel to the fire of old rivalries and insecurities.

With a serial killer on the loose and targeting homeless veterans, Roman, Sean, and their friends struggle to meet across sexual divides. True love awaits—but so does a killer’s vengeance.

If I ever saw a blurb which does not do justice to the book, while technically describing correct information, this blurb is IT. This blurb makes the book look like an erotic romance, which in my opinion it is really not. In fact I do not think this is a romance at all, even though it certainly shows complex relationships among the men named in the blurb. I think this is first and foremost a book about the awful ways our society treats our veterans, and how these people attempt to deal with the horrors they have to live in when they come back from the wars society sent them to fight. I want to warn readers not to expect an angst fest. All the main characters have really bad war injuries to deal with – physical and psychological, but the book deals with their pain very matter of fact way.

More importantly, while their pain is not minimized at all, I really loved that these guys still try to help those around them who may be in worse circumstances than they are.

“Brackett did not reply. On the TV, astronauts died one by one and the survivors tried to save the planet. You couldn’t save everyone. Roman knew that from the war. But you did your best to save the ones you loved and had vowed to protect or you died trying.”

These men are not perfect, they certainly have flaws and multiple flaws at that, but still the first word that comes to mind when I think about Roman, Kristian, Sean and several others is “admiration”. It is really easy to admire these guys and want them to get better and also to hope that institutions and society in general will get some clues about how much our veterans deserve better treatment in all areas of life.

This story is also a mystery. The question of who is killing homeless veterans drives the plot in a several significant ways and moves the relationships forward. I both liked and disliked the resolution of the mystery. I liked it because I could understand the motives of the killer (as much as you can understand the motives of the deranged person). However, I thought that the clues for the killer’s identity were too obvious. When the circle of suspects was narrowed down to the people main characters know and interact with, the killer was showing too much casual cruelty. To me it was very clear who the killer was, and I hope it won’t be too obvious for other readers. I did not think that the story suffered much because of it, it still worked for me as suspense, but I had to note that I did not have to do much guessing, if any.

I thought that the existing relationships between the main characters and those that were forming right in front of reader’s eyes were the very best part of this story. I said it is not a romance IMO, but there was certainly a lot of love between main guys, as well as friendship, support, and all the things I love reading about.

I said that the blurb supplied technically correct information, but I am really not sure if Roman getting “caught up” between two dominating men would be completely technically correct. Yes, both Kristian and Michael (the cop referenced in the blurb) love him. This however seemed to be something all three of them had known for a while and they seemed to be content with the status quo. Sean is the one who unintentionally destroyed the status quo by being attracted to Roman and to other people. The bonds that tie all of these men together are being tested and new bonds are being formed, but there are no neat answers – just as life rarely supplies you with answers.

As blurb states Roman is asexual. This is the first time I’ve read an m/m book with the asexual character being front and center, perhaps even the most important character in the book. This certainly adds another layer of complexity when everybody involved is trying to figure out where they stand. Here is how Roman is trying to explain who he is to Sean.

“I like guys,” he told Sean. “Guys who work hard, who are honest with you, who make the world a better place just by being in it. All my best friends are guys. The best thing in the world would be someone I could live with every day, go to sleep every night, someone who’d cuddle up on the sofa and watch dumb movies. Someone who’s glad to see me. But I don’t want the big thing, the thing everyone else wants. The deal breaker.”
Sean look confused. “What deal breaker?”
“You tell me,” Roman said. “What do you want from the guy you sleep with?”
‘I’d want…I don’t know. Love?”
“Love is not a deal breaker. Think lower.”
“You don’t want…” Sean’s gaze went to Roman’s crotch. “Sex?”
“Never.”
“Sean’s expression was half disbelief, half humor. “You’re joking.”
“Not joking,” Roman said. “Never wanted it. Not my thing. It’s called asexual.”
“You’ve never had sex,” Sean said tentatively, as if trying the idea on for size.
“I didn’t say that. I said I don’t want it. Now ask me other things: do I jerk off, do I have fantasies, did I ask a doctor, is it the brain injury, is it my medicine? Sometimes, sometimes, yes, no, no.”
“I lost track after jerk off.” Sean scratched the side of his head. “I’ve never met anyone who didn’t want to have sex. It’s just… built in, right?”
Roman said, “Not into me, I’m asexual.”
“Asexual.”
“Yes.”
“But that’s not …common,” Sean said.
“I’m glad you didn’t say normal,” Roman replied.”

Roman is just such an appealing character. It would have been so easy for the author to crank the angst level up because of his brain injury alone, but he deals with cards life gave him and tries to make the best of it. He knows it will not be easy for him to find a relationship he wants, but he keeps hoping and when he meets a person he knows he might fall in love with, he deals the cards he has been given, even if he has to compromise to make those he loves happy and try to get some happiness for himself too.

As I said before, this book really does not supply neat answers in the relationship department. I thought this book ended very satisfactorily, but there is absolutely no romantic resolution for anybody. But I felt that the deep love these men have for each other will help them figure it out no matter what.

“I get you every Friday night,” Brackett said. Everything else we’ll improvise”.
No, I am not telling you whom he is saying these words to and what if anything this means.

There is a magical element in the book, but the book is not a fantasy. I thought the magical element was used very effectively to bring a certain point home about helping these guys heal their many hurts, I really liked that using it had very clear side effects and that it could not heal everything. It was a little strange to read, but I decided that I really liked it.