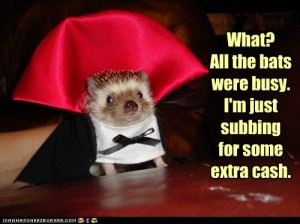 I was involved in a conversation on Twitter a couple of weeks ago about whether or not books are “substitutable”. The context was a patron going to browse books at a library. Would one book do just as well as another?

Differing views were expressed but I mainly ended up on the side that yes books are substitutable. Others felt that because the kind of book they were looking for was so rare, they were in no way substitutable.

Then a ruckus about something else happened and people were wrong on the internet all over the place but something clicked for me which brought me back to the substitutability argument.

We were talking on Twitter about equality (of people in relationships) and I made the comment that “equality” in this context does not mean “identical” but rather, “having equal value”.

And that’s where I had my epiphany about books and substitutability. Usually, at least, as I understand it, when people talk about this kind of thing, it is in reference to ‘widgets’. Because widgets are exactly the same item, there is substitutability between one widget and another. That is to say, it makes no difference whether you pick up widget A or widget B – they are the same thing and (if they’re not broken) they will provide the same experience/function.

Disclaimer: I’ve never studied economics (which I think will become obvious, if it isn’t already).

But books aren’t widgets. Unless there is something hinky going on, each specific title is a different book. And I realised that what I was talking about on Twitter the other night was that, at least until I’ve read it and can judge it on an empirical basis, for the most part*, each unread book has an equal value to me. Once I’ve read it, I know exactly how different it is from other books and it is no longer an item which is substitutable. In the context of say, agency pricing however, there were many books I didn’t buy because the price was prohibitive. I bought other books instead. So at the point of purchase I find books to be very much substitutable.

*There are some books which I would ascribe a higher value to unread – such as a book from a favourite author or a much-anticipated book in a series I have previously enjoyed. These books still have an element of being “Schrödinger’s book” however because even if you expect it to be good, until you’ve actually read it, you can’t know for sure.

(Arguably, the net widens if what the person is looking for is not a “happy reading experience” but rather, “entertainment”; in which case it might be that playing a game, watching television, going to a movie OR reading a book have equal value. They are clearly very different activities requiring different effort, finance, time and skill but at this level they are “substitutable.”)

So, what does everyone think? Are books substitutable?

Do you think books have equal value? Or are some books more equal than others?