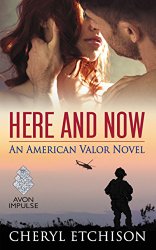 The Rangers of the 1st/75th fight hard, train hard and play hard. They are physically strong and mentally tough, disciplined and courageous. But all their military training hasn’t prepared them for falling in love.

Former Ranger Medic Lucky James feels right at homeworking long night shifts in the ER, but less so during the day, when his college classes are filled with flirtatious co-eds. When his 19-year-old chem lab partner shows up at his work with dinner for “her Lucky,” he quickly enlists the help of Rachel Dellinger, a nurse and fellow third shift “vampire”.

Rachel is a people pleaser at heart, but she’s finally decided enough is enough when it comes to her on-again, off-again boyfriend. When Lucky begs Rachel to help him ward off the advances of his teenager pursuer, she blackmails him into helping move her things out of the apartment she shared with her ex into a place all her own.

From there a friendship is born between two people just trying to make it through the night. Neither are living in the past or planning for the future. Until one day changes everything.

I never can be sure what will catch my eye about a book or a blurb and make me want to read it. Here, it’s the fact that Rachel and Lucky work third shift. Been there and done that. I found, as Rachel does, that third shift and living in an apartment complex just don’t go together. But if she thinks just hearing the neighbors stomping up and down stairs is bad, she should try living on the top floor of a building and trying to sleep through it being reroofed.

Lucky and Rachel might not have that much mutual history but what they do have was painful. Rachel took out her pain at her soldier brother’s death on Lucky but he’s wise and experienced with loss enough to realize he was a convenient outlet. Plus Rachel womans up after they meet again and apologizes.

From there an easy friendship develops. They work, they talk, they joke, and Rachel attempts to keep up with Lucky on morning runs. Still, he’s not looking for a relationship and she’s just got out of her latest bad one and is determined to be on her own a while. Lucky’s the type she knows would have her back if her ex ever got off his lazy ass enough to actually be an asshole while Lucky knows he can count on her to help him fend off 19 year old – to him – baby coeds from his college classes. Something his father says makes him think – he’s a rolling stone like his departed mother while Rachel seems the type to sink roots. It would never work so they don’t go there. For a while – until a grief stricken Lucky needs some TLC that Rachel offers.

Lucky has his moments of depression and worry about his buddies still out on patrol. He’s run up against “what am I doing” thoughts about his post-military life. Has also run smack into wall of his military medical training not being accepted for civilian practice. Now after talking with an injured friend, Lucky has to decide if the post military road he started on is the one he wants to stay on. Just when Lucky is questioning his future plans, something from Rachel’s past sideswipes her – not that I didn’t suspect a thing or two already – as well as something from her TLC experience with Lucky. Yes, it’s super-sperm.

I was surprised by something that happens next as Lucky weighs his options and chooses one I wouldn’t have bet on. But he makes up for it by giving the best KMA line to Rachel’s ex-BFF. I could have kissed him right in the Walmart aisle for that. Now, if he can only convince Rachel of a few things in life – one that he loves her, that he really wants to marry her without regard to the results on the test and three that there is life outside of their small Oklahoma town.

The Army and Ranger stuff sounds accurate and is detailed enough that even though it’s not described in bullet point specifics, I can understand what Lucky’s referring to and if not, Bing is my friend and has all the answers. It might mess with Lucky a little that Rachel holds off in making a decision for the duration of his RASP training. Personally I think it’s a great idea as what she’s deciding and contemplating are major steps for her. It’s also great that Lucky holds out for the words he needs to hear before people start pulling their cellphones out to video him as he carries Rachel off to a hotel after his graduation ceremony. Yeah, youtube here it comes.

So, the romance is great, the time everyone takes to be sure about the romance having long lasting legs is better and yes, the third shift stuff is accurate. I hope you’re planning on continuing the series as Gibby needs to have to use his baby cake knowledge first hand. B+