Recently I haven’t read too many category romances. Some were taking on the quality of “been there, read that” and this worried me. “Gosh,” thought I, “time to pull out a tried and true author and get back in the swing of billionaires and their brides. But whom to read?” A quick flip through my trusted Sony and I saw your name. “That’s it,” I said. And it was. 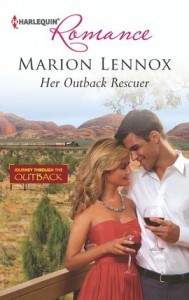 A small, scrawny mutt brings Amy Cotton into Hugo Thurston’s life while they’re both traveling on the Ghan Railway. Amy and her sister Rachel are illegally traveling with their beloved dog Buster who’s been heard and reported. The sisters had dined with Hugo and his recently widowed grandmother Dame Maud and charmed the older lady. Now with the conductor closing in on Buster, Amy heads to the only place she can think to hide Buster – the premium car where Hugo and Maud have their accommodations. Luckily for Buster and his co-mothers, Hugo is willing to play along. But attention is the last thing they need while trying to hide the little dog at the hostel they’d booked so the sisters accept Maud’s invitation to stay at the family’s palatial home near Uluru for a few days stop.

Geologist Rachel and Amy had planned to get rock samples while hiking the area but matchmaking Maud – who immediately recognized retired ballet dancer Amy – senses a connection between her reclusive grandson – who has spent 20 years in the Australian Special Forces in order to escape the media attention his wealthy mining family attracts. Amy and Hugo are no match for his wily grandmother who charmingly manipulates them without appearing to do so. But Hugo saw what the money and fame did to his parents and all the other women his father brought into their world and is determined not to drag Amy into the fishbowl life regardless of what he knows they quickly come to feel for each other. But Amy has other plans. Will her efforts to help others actually end up showing Hugo the light?

There are conventions in categories. I won’t use the dreaded F word but there are definitely tropes and plot devices that I see frequently. With some books, I can’t get past them but with others, I hardly notice because I’m so interested in the characters, or the setting or the story. Or, as in the case here, all three. Ridiculously wealthy hero – and family? Check. Working class heroine with family issues? Check. An older – usually female – relative who spies a potential romance for her relation who has been ducking all efforts of hers so far? Got that too. A couple thrown together who discover sparks and maybe something more than sparks? Still check. But there’s so much more to this story than what could sound like a check list.< Hugo is the silent, taciturn warrior who melts like chocolate in the sun when his beloved grandmother wants something or wants something done. Amy is devoted to her wounded sister to the point where she'll give up her ballet career to care for Rachel but who can also take a new job and turn it into a way to continue doing what she loves while also helping others. In her, Hugo sees himself. They're both highly trained professionals used to doing incredibly hard physical things and Hugo has to respect a tiny woman who can flip his badass SAS self on his arse. That scene is priceless. He also sees a young woman giving up what she loves in order to answer the call of family. And she can still upend him if she wants to all while they're saving a darling wallaby joey. I have to love a man willing to hide a small, ragged dog *and* save wildlife too. When conniving relatives appear, generally I wince. If I can tell that another secondary character is being set up for a sequel book, I'm usually rolling my eyes but Maud and Rachel are written so well and so believably that I can't wait for the next book in this duology. I especially like Maud who pulls no punches with Hugo while making her feelings plain. She is the one who jerks a knot in Hugo and tells it like it is with how strong Amy is and for him not to sell her short. But once Hugo has come around, he does a lovely apology and an even better proposal. I think these two will do just fine, complementing and balancing each other in years to come. I can't wait for Rachel's story and Maud's part in it. B+ ~Jayne