I’m a fan of your Edge series so I was very sad to hear that it’s likely that Steel’s Edge is the last book set in that world. Steel’s Edge begins in the Weird, a fantastical world that mirrors our own, where Lady Charlotte de Ney discovers that her husband Elvei does not love her in the worst possible way. 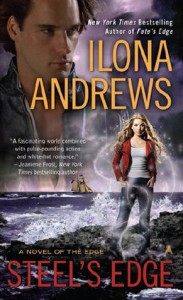 Charlotte and her husband have been trying to have a baby for a long time, and when the news arrives that she will never be able to give him an heir, Elvei asks Charlotte for a divorce. Charlotte is not just a healer, but the Healer – she possesses the most powerful healing abilities of anyone in the Weird. But she cannot apply those skills to herself.

When Elvei drops the pretense of having loved her and reveals that he married her for other purposes, Charlotte does something no healer is supposed to ever do: she turns her healing abilities to the dark arts, and uses them to hurt Elvei. Charlotte quickly reins herself in, but only after nearly losing control of herself.

Dark healing magic is seductive and difficult to control, and losing control of it again could turn Charlotte into a plague bringer. When someone has as much power as she does, it means she could annihilate the world’s population. To avert that possibility, Charlotte travels to the Edge, the dimension between the Weird and our own world.

In the Edge, Charlotte’s magic is weaker and a descent into darkness is less likely. Charlotte can still heal there, but not as powerfully. Even with reduced power, Charlotte is still a better healer than anyone else in the Edge. But the Edgers don’t know that, so when Charlotte’s money and horse are stolen, they turn her away from their doors or worse – all except Eleonore Drayton, who takes one look at the bedraggled, hungry Charlotte and more or less adopts her.

Three years later, Charlotte, now living in the house that Eleonore’s grandchildren vacated in On the Edge, is almost an Edger herself. One day, a wounded man is brought to her house. The man is Richard Mar, Cerise’s cousin from Bayou Moon and brother to Kaldar from Fate’s Edge.

Richard is being chased by slavers, people who kidnap Edgers and turn them to slaves in the Weird. Richard has been hunting slavers for a long time, using his ability to extend his magical flash to any weapon made of metal. He is determined to eradicate slavery because he and his loved ones have suffered at the slavers’ hands.

Richard’s efforts have met with some limited success, but what he really needs is to find out who leads the slavers’ ring. He will see those people exposed and dealt some justice if it’s the last thing he does, because if he doesn’t, his fifteen year old niece Sophie may get herself killed attempting to do so in his stead.

Charlotte heals Richard to the best of her abilities, and almost falls in love with him in the process. But the slavers know that Richard is hunting them. In a bid to capture him, they attack Charlotte’s house.

And then something very bad happens – something that leads Charlotte to reenter the Weird. She joins forces with Richard in pursuit of revenge.

Dangers lie in wait for them, including from Charlotte herself, since her determination to take out the Slavers means she will put her plague-bringing power to use.

Will Charlotte be able to do so without either killing innocent people? Will Richard be able to kill her if it comes to that point? Will they succeed in destroying the slavers and those behind their ring? And even if they do, how will they overcome the differences in their social rank?

Steel’s Edge is competently written, but lacks the same magical spark that animated the earlier books in the series. As I tried to think about why it did not work equally well for me, I came up with the following thoughts.

Although this book is called Steel’s Edge, most of it is actually set in the Weird. I don’t find the Weird nearly as interesting as the Edge, so that was a letdown.

Charlotte’s character was another problem. She was elegant, noble, and eventually, driven by revenge, but compared with the heroines in the earlier Edge books, she didn’t have much personality. Richard’s niece, Sophie (formerly known as Lark) was a lot more interesting.

I liked Richard better than Charlotte, because in addition to being equally elegant, noble of heart, and driven by revenge, he had his Edge rat past and an interesting backstory. He was also part of the Mar family, and while I wish Cerise had made an appearance, it was nice that Richard’s presence pulled in his brother Kaldar for a few scenes.

We got George and Jack appearances as well, for which I’m grateful since I really love these two, but they were less entertaining here, perhaps because they are getting older. Or maybe it was because in earlier books their presence is associated with humor, but in this book, they had to deal with heavy issues and that made them more serious.

The romance between Charlotte and Richard was mildly enjoyable. There was a blandness to it, perhaps because the characters were almost too perfect and too alike. They had few flaws and outside of the class difference between them and the obstacles they faced as part of their mission to stop the slave trade, no issues.

In On the Edge, Rose had a chip on her shoulder about guys from the Weird. In Bayou Moon, Cerise distrusted strangers and William hid his changeling nature. In Fate’s Edge, Kaldar was a con-artist and seducer, not someone Audrey felt she could settle down with.

In this book, though, there were no such trust issues. Richard and Charlotte see each other and fall in love almost right off the bat. Late in the book, Richard gets jealous over Charlotte’s necessary attentions to another man, but this was brief and felt manufactured. Richard and Charlotte have to face a lot of things that have nothing to do with their relationship, but for most of the book the relationship itself isn’t tested and doesn’t need to be. That’s great for them, but not as interesting for me.

Speaking more generally, this book also did not have the same sense of humor I loved in the earlier Edge books, and I felt it wasn’t as entertaining. Some scenes involved a lot of attention to fashion and slowed the book down.

There were some scenes in this book, especially on the slavers’ island, that showed tremendous writing skill, but on the whole the book didn’t have enough zing. There were also inconsistencies, for example:

[spoiler]If Richard’s purpose in fighting slavers is to keep Sophie from doing so, then why is Sophie more interested in another target?

Sophie’s fighting abilities are said to rival Richard’s, but in her climactic fight scene, that ability didn’t manifest as previously described.

And while I’m hiding spoilers, I was also bummed that once again we didn’t learn the ultimate fate of a major villain.[/spoiler]

I was disappointed when I heard you would likely not be continuing the Edge series because I do so love the world of the Edge, and characters like Jack and George, but maybe it’s for the best. Maybe this series really is tapped out. Thankfully, I can always revisit the Edge in books like On the Edge, Bayou Moon and Fate’s Edge. In the meantime, Steel’s Edge gets a C-/C.