I discovered this book when I was investigating the new publisher Escape Publishing, the digital first imprint of Harlequin Australia. All the Escape Publishing books were 99c on when I was prepping the interview for posting on Dear Author. I don’t know that I would have discovered the book or taken a chance on it because while I am on a contemporary kick right now, dancing seems to be a thing that translates better visually that it does in text. Moreover, I am not even that big of a fan of dance movies. I’ve missed all the Step Up movies. The last dance related movie I’ve seen is Simply Ballroom (1992!) and I can’t even remember what that was all about. I have watched So You Think You Can Dance from time to time but even my interest in that has died out. So a book about a dancer and a mechanic who enter a ballroom dance competition is simply Not My Thing. 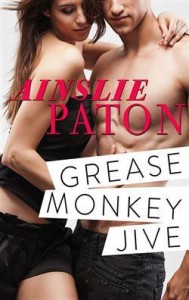 I started the book at about 11:00 at night. I thought I would read for 15 minutes and then go to sleep. I had to go to sleep, you see, because I had a big meeting the next morning. The next thing I knew it was 12:30 pm and I was only at the 40% mark of this book. This book is long. Loooonnnngg. Or maybe it seemed that way because I was anxious for two things. To find out what happened and get some sleep. Unfortunately, the book was so darned interesting that I ended up reading until nearly 3 am. In some kind of karmic serendipity, I awoke to find my morning meeting cancelled so I just moped around the office like I had been on an all night bender, which of course I was, but my drug of choice was reading not liquor or narcotics.

The story is fairly simple in its plot. Alex Gibson is a business student trying to get a degree. She is also an accomplished ballroom dancer. The ballroom competition this year has a grand prize of $50,000 and that is money she could use to replace her dying car and help defray university expenses. She enters with her best friend, Scott. But he breaks his ankle. In reading the rules, it is determined that Alex must finish the competition with the dancer she entered. BUT she does not have to dance with that person during the entire competition. Together they convince new ballroom student Dan Maddoz, a mechanic, surfer, womanizer, to take Scotts place until Scott can return from his injury.

Sound implausible? It’s not. One of the great things about this book is that everything that happens is given a plausible excuse. It might strain credibility at times, but there was a concerted effort to make the reader believe that what occurred in the book could really happen.

Dan Maddox comes to Alex’s studio on a bet. He and his three mates spend most nights cruising bars, picking up women, leaving them, and meeting for surf in the morning. It’s the only life that Dan knows. His father is a viscous drunk; his mother, long dead; and his uncle, an aging roué. One night Dan is walking around, half drunk, and spies himself in a plate glass window of a closed shop. His shirt is unbuttoned. He has one sock on. He has a half bottle of empty wine and a stupid grin on his face which fades the longer he looks at his reflection. He is becoming something he can’t even look at in the mirror. He says to his mates that the only women in his life are those “involv[ing] a retail transaction or fucking.” But it takes more than this one moment for Dan to take action on his thoughts that he might need to change, which makes his reformation all the more believable. Dan can’t even articulate why he wants to change. “It’s just wrong. I can’t tell you what I mean. Where’s Fluke and all his words when I need him? It’s just wrong. Why is there one standard of behaviour for us and one for the women we want to admire?”

He recalls vague memories of his mother, the ballroom dancer, and there was something about her that he’d like to recapture and so the mates all bet that they can’t last a twelve week course at a ballroom dance class.  Dan’s emotionally open in the book. He expresses his feelings fairly easily to his mates but he’s not always artful in his expression of them, making him all the more endearing.

Alex is a woman in the middle, a product of two strong women’s opinions and upbringing. Her grandmother married the love of her life and lost him to the Vietnam war. Only it wasn’t during the war, but after when Alex’s grandfather became addicted to alcohol and turned moody and violent and died two years after returning home from the war. Alex’s mother became pregnant by her wealthy lover, a married man. Alex grew up with her mother telling her to never rely on a man and her grandmother telling her to follow her passions. Unfortunately for Alex, she views these two things in opposition to each other.

In this careful exploration of mother/daughter and father/son relationships, Alex’s character seemed to suffer the most. I found her disdain for blue collar workers to be at odds with her mother’s insistence that she be independent. What did one have to do with the other? If her mother wanted her to not rely on a man, then why was her mother so insistent on Alex dating a suit? If it was a wealthy suit that abandoned her mother (and Alex) why did the suits provide the most security to Alex and her mother?

But this was a small complaint juxtaposed against all the interesting emotional struggles explored in the book. Dan and his mates and their interactions provide the comic relief. The dancing between Alex and Dan provide the sexual tension. Their relationship was like a dance — one step forward, two steps back.

Alex is a confident character and while she finds Dan attractive, she starts the book with her own boyfriend, one whom she believes she loves. She isn’t impressed with Dan’s antics and isn’t afraid to call him out on it. During one scene, the men are blindfolded and supposed to be led by the women but Dan doesn’t allow his woman to lead. Alex chastises him, telling him that “helping” his partner instead of allowing her to learn and make mistakes was ensuring the woman wouldn’t learn. Alex calls this bullying. I call it paternalistic.  It amounts to the same thing.

There’s a lot of great stuff in the book about the female/male dynamic; about the double standard; and about men respecting women. I appreciated seeing that addressed in a contemporary romance.  To complete the role reversal, the mates ask Alex what her intentions are toward Dan.  Mostly I loved watching Dan and Alex truly fall for each other. No insta lust. No wondering why these two belong together. By the end of the book, you know.

“How are we going to do this, then?” He meant build a life together, because that seemed like the right question to ask, and he laughed when she said, “With lots of practice,” because that felt like the right answer, even though he knew she meant lessons and rehearsals.

Somehow the layers in the language were fitting.

He had no precedent for this and no room for it in his life. It made him feel unearthed, slightly out of control, and there was everything wrong with that. This was some karmic test, on his resolve to change and payback for all the times he’d been careless with someone else’s heart, better than anything Fluke or even Ant at his most demonic might have designed. He had to find a way to get through it, learn from it, and survive it, without hurting Alex, without losing the self he was trying to become.

I would be remiss with the DA crowd if I didn’t mention that there were a couple of editing errors in the book.  “He lifted a hard from the curve of her waist”  Also there are multiple points of view in this book and comprehension would have been aided if there were section breaks to identify the changes in points of view.  Overall, though, I think this was a very different but very good contemporary romance. B

PS this book is available for 99c until December 3.  I looked at the other retailers and I still don’t see the book available at any place other than Amazon.

→ Jane
Previous article: REVIEW: Body Heat by Susan Fox
Next Post: Your Rights and Deadlines Under the Price Fixing Settlement