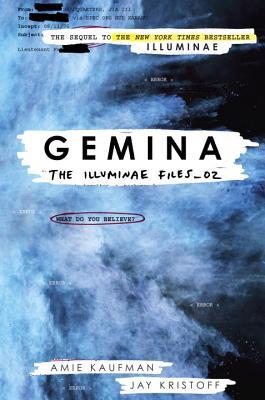 Moving to a space station at the edge of the galaxy was always going to be the death of Hanna’s social life. Nobody said it might actually get her killed.

The sci-fi saga that began with the breakout bestseller Illuminae continues on board the Jump Station Heimdall, where two new characters will confront the next wave of the BeiTech assault.

Hanna is the station captain’s pampered daughter; Nik the reluctant member of a notorious crime family. But while the pair are struggling with the realities of life aboard the galaxy’s most boring space station, little do they know that Kady Grant and the Hypatia are headed right toward Heimdall, carrying news of the Kerenza invasion.

When an elite BeiTech strike team invades the station, Hanna and Nik are thrown together to defend their home. But alien predators are picking off the station residents one by one, and a malfunction in the station’s wormhole means the space-time continuum might be ripped in two before dinner. Soon Hanna and Nik aren’t just fighting for their own survival; the fate of everyone on the Hypatia—and possibly the known universe—is in their hands.

But relax. They’ve totally got this. They hope.

Once again told through a compelling dossier of emails, IMs, classified files, transcripts, and schematics, Gemina raises the stakes of the Illuminae Files, hurling readers into an enthralling new story that will leave them breathless.

DISCLOSURE I GOT THIS BOOK THROUGH AMAZON VINE PROGRAM FOR FREE

I reviewed the first book in this series here at DA https://dearauthor.com/book-reviews/overall-a-reviews/a-minus-reviews/review-illuminae-the-illuminae-files-1-by-amie-kaufman-and-jay-kristoff/ and my grade reflected just how much I loved it.  I loved everything – the unusual format, the heart-stopping adventure, and the powerful romance. At the end of the first book it was made very clear that the overall story arc of refugees from Kerenza trying to survive and make BeiTec Corporation to answer for their evil deeds was far from over. But I was actually not sure where the romance between Kadi and Ezra could go from there because it ended on such high powerful note.

So when I started this book I expected the adventure to continue but I did not expect Kady and Ezra to face any internal conflicts.  I was right about the adventure; danger to everybody was still there in *spades* and I was glued to the pages again trying to predict how it would end. Kady and Ezra are also present and they play small but important part in the story, because of course the fight against BeiTec is not over yet.

However, I did not expect to see a new couple take center stage and I am not sure how I feel about them together. Before I go any further, let me state my usual disclaimer – as much as I love romance, I read across genres and I certainly do not *need* to see a romance in sff or any other genre novel when there are other things going on. I mean it is nice, when people who manage to save the world in these books also have support system in the form of a loved one, but for me it is enough when that support system is briefly mentioned, or even when the support system is not romantic. If the characters are friends who save the world together, I can be a very happy reader if the book is otherwise well executed.

Having said that, if the romantic storyline *is* front and center same as adventure, I want to see some kind of chemistry between the couple/ potential couple. I am not talking about sexual chemistry per se, I am 99 percent sure that there was no sex in “Illuminae” but I thought chemistry between Ezra and Kady was so powerful that one could feel it while reading.  I just could not see them apart for the rest of their lives.  And the writers managed to make me think that about two eighteen year olds. And yes, I know some people who fall in love at seventeen – eighteen manage to stay together for the rest of their lives, but to me those stories do not happen that often. Still, after reading the first book I did not question that they would stay together at all.

But with Hannah and Nick I was torn. I was pleased that the writers made such a good effort to write a different love story within the same adventure story arc. Hannah and Nick certainly were not Ezra and Kady with different names; they were different enough characters, at least to me. Opinions may differ on that of course.

And they were resourceful and heroic kids, overall quite decent human beings. It was just that I did not buy them as a couple – at all. I think the reason, first and foremost, was that as the story begins Hannah has a different boyfriend. She and Nick are, well, let’s call them friends who like to bicker, and while it was clear that Nick had feelings for her, I did not get the impression that Hannah felt anything more than friendship .

Soon they are thrown into the middle of the invasion and they have to fight hard and do their best to save as many people as they could, and to save the world too. I thought it was believable that when they had nothing to bicker over they showed that they were real friends who support each other. I guess I just did not buy Hannah falling for him that fast, even in such extreme circumstances, over the course of, what, a day and a half or even less than that? I think that if she had not been with somebody else as the book begins I could have bought her realizing that she thought of Nick as more than friend that fast, but not the way it was done.

However, they are the same age as Kady and Ezra (Nick is eighteen, and I think Hannah is too but I’m not one hundred percent sure), so I am choosing to believe that their feelings will become stronger over the time.

The adventure plot really should not be spoiled, so I won’t. I will just warn you that the violence level is high and death rate is high too – Beitec is truly ruthless after all, but whereas in the first book I could say that the book did not dwell on detailed descriptions, here one of the things which threatened everybody had nothing to do with Beitec and was gross to me. It felt like a horror element, which was not gratuitous by all means, but I still wish I could unread it.

C+ for romance B+ for everything else.